The U.S. Supreme Court on Monday asked the solicitor general to consider whether it should hear as a matter of original jurisdiction New Hampshire's complaint against Massachusetts' regulation imposing income tax on remote workers during the COVID-19 pandemic. 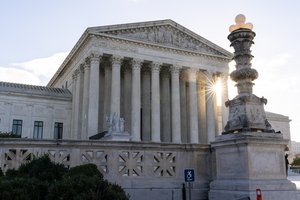 Several states besides New Hampshire and Massachusetts have already weighed in on a dispute over nexus of remote workers, now before the U.S. Supreme Court. (AP Photo/Alex Brandon)

In orders following their Friday conference, the justices held off on deciding whether to grant New Hampshire's complaint until they hear from the acting U.S. solicitor general, Elizabeth Prelogar. The court is seeking the advice of the Justice Department on whether it is constitutional for a state to reach across its borders and tax residents of another state who are not entering that state. The case involves nexus of remote workers, but a decision could be applied to a variety of other nexus matters and cross-state disputes.

The request for the Justice Department to weigh in is significant for several reasons, according to Joseph Bishop-Henchman, a tax and constitutional lawyer.

"The case has survived the first opportunity to be dismissed, and the court is treating it seriously enough to want to know what the U.S. government's position is on it," said Bishop-Henchman, vice president of policy and litigation at National Taxpayers Union Foundation. "It asks for that only a couple dozen times each term, and the vast majority of the time will follow the solicitor general's recommendation. So what they write will be very insightful."

However, Bishop-Henchman also cautioned that it is not clear when the justices will make a decision about hearing the case, because when they ask for the opinion of the solicitor general, they do so without putting a deadline on the request.

Because the case is between two states, New Hampshire is asking the justices to hear it as a matter of original jurisdiction. One issue to be clarified is whether they must, Jeremy Abrams, state tax counsel at Reed Smith LLP, told Law360.

"You've seen the arguments made [by New Hampshire and other states] that original jurisdiction is not actually discretionary," Abrams said.

He said he hoped the justices would clarify when one state can tax another's residents without that resident entering the taxing state, adding that a decision could implicate other types of taxation besides the remote worker question presented here.

The justices have already heard the views of several states besides New Hampshire and Massachusetts. Two amicus briefs, signed by state attorneys general of both parties, pled with the court that it must decide whether states can tax other states' residents in this manner.

Massachusetts told the justices in reply Dec. 11 that New Hampshire is wrong on all counts, essentially arguing the reverse of what New Hampshire argued. In addition to pushing back on New Hampshire's position that the case merits original jurisdiction, Massachusetts said its temporary regulation "readily passes muster" to satisfy all four prongs of 1977's Complete Auto Transit v. Brady

. It taxes an activity with substantial nexus to the taxing state, it is fairly apportioned, it does not discriminate against interstate commerce, and it is fairly related to services provided by Massachusetts, the commonwealth told the justices.

The justices could look at those arguments and decide how much freedom Massachusetts and other states have in determining the conditions for sourcing income into their states, Richard Jones, leader of the tax group at Sullivan & Worcester LLP, told Law360.

"We all get there is a concept of sourcing income into your state, when it's earned by a nonresident," Jones said. "But there has to be some kind of parameter on what is constitutionally permissible."

A spokeswoman for the Massachusetts Department of Revenue said the department would not comment on pending litigation.

Representatives from New Hampshire did not immediately respond to requests for comment from Law360.

Update: This story has been updated to include comments from attorneys.