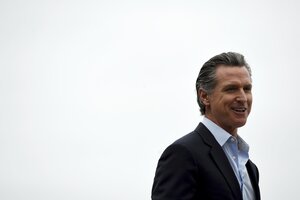 At a ceremony in San Fernando, Democratic Gov. Gavin Newsom signed an amended version of A.B. 80, which would allow nonpublicly traded businesses that lost at least 25% of their revenue as a result of the coronavirus pandemic to fully deduct forgivable PPP loan expenses. In addition, those loans will not count as California taxable income. The legislation will cost the state about $6.2 billion, the governor said.

The California Assembly voted 75-0 Monday to pass the bill. On April 19, the California Senate voted 37-0 to do so.

The bill provides $6.2 billion "of tax relief for small businesses," Newsom said at the signing. "Bipartisan, unanimous support for this bill. I'm proud of California."

When passing the Coronavirus Aid, Relief and Economic Security Act

in March 2020, Congress made PPP loans nontaxable but did not clarify whether expenses paid with the loans would be deductible. With the passage of the Consolidated Appropriations Act

in December, Congress clarified that they were deductible, leaving states to decide whether to conform.

The country's most populous state was on the verge of doing so in February, but a snag arose from other federal legislation, when a provision in the American Rescue Plan Act

banned the use of relief funds to offset state tax cuts.

That provision has caused great consternation among some tax professionals and policymakers, and sparked lawsuits by 18 states against the U.S. Department of the Treasury, with the states saying the federal government is encroaching on their sovereign powers.

Meanwhile, it confused some states, including California. Newsom and state legislative leaders said March 12 that they worried providing relief on PPP loans could be considered a tax cut and A.B. 80 would be put on hold until the state received guidance from Treasury.

On April 8, Treasury made clear that the provision in the ARPA does not stop states from making changes to conform with the Internal Revenue Code or other federal tax laws. After that, California began once again to proceed with the conformity bill.

Newsom said Thursday that he was pleased to be able to finally sign the bill, saying that PPP loans had a "profoundly significant" effect on small businesses in their attempt to stay afloat, adding that "it's been a hell of a year."

He said the state decided to conform for smaller businesses because "people that put everything on the line and take risks should be recognized and should have the opportunity to be rewarded.