How Some NY Judges Are Unpausing Eviction Cases

To delay the case further would be "futile." To keep it on hold would be "absurd."

These are among the adjectives peppering a growing body of decisions in New York's housing courts, where some judges have said they can restart eviction cases while tenants await determinations on their applications for pandemic rental assistance. 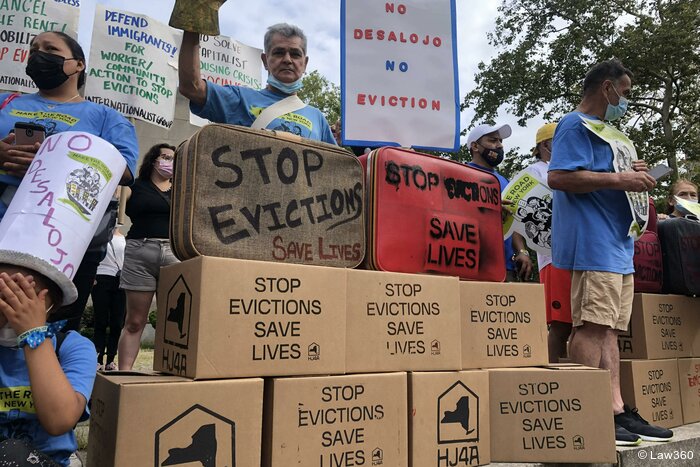 New York is among several states — including Oregon, Massachusetts and California — to pause cases at least temporarily while such applications are being processed, to prevent premature evictions. And while tenant lawyers say New York's rule has been broadly effective, some judges have said they have the authority to lift the stay.

Yet this sort of relief can still be an uphill battle for landlords who are increasingly frustrated with case delays, according to Benjamin Margolin, an associate with Belkin Burden Goldman LLP.

New York's Emergency Rental Assistance Program, or ERAP, law states that pending applications to the primarily federally funded program pause all eviction proceedings, so long as the tenant is not found to be causing a persistent nuisance.

"The plain language really provides that these cases get stayed blanketly," Margolin said, adding that for a landlord to be successful, "there needs to be a lack of fairness, an issue with credibility or bad faith."

To better understand the legal basis for lifting an ERAP stay — and why landlords are seeking the remedy — Law360 reviewed more than 30 housing court opinions issued between September and July.

In most instances, judges appear to have intervened in holdover eviction cases, where the landlord may be alleging that the tenant has overstayed a lease or doesn't have a formalized rental agreement.


Click the case name to view the text of its decision; expand to see more information, including a snippet of the decision's reasoning. The colors show the result of the decision: pause affirmed in red, pause vacated in blue.


Holdovers are less common than nonpayment eviction cases, making up about 19% of all new eviction cases filed in New York City so far this year, according to data compiled by the state court system.

"I think the big picture is that the big majority of cases are nonpayments, and pretty much nobody is questioning the ERAP stay in the context of a nonpay," said Edward Josephson, a supervising attorney with the Civil Law Reform Unit at the Legal Aid Society.

Margolin of Belkin Burden Goldman described a "rarer example" of getting a stay lifted in a nonpayment case in Queens this month, in Brisbane Leasing v. Williams.

In that instance, the lawyer went to the ERAP website and noticed that, though the tenant's name was in the system, the application was not fully submitted. He notified the court, and the stay was lifted.

Still, even "outlier" decisions can be cause for concern, making it more difficult for attorneys to advise tenants of their rights, said Roland Nimis, deputy director of the housing unit at Bronx Legal Services.

"The most concerning trend is where judges are stepping in, maybe referencing that the program is low on money [or] they don't think the landlord will accept it," Nimis said.

ERAP stays are important even for those who will ultimately have to move, Nimis added, because they give people time to search for a new place to live "in a more reasonable, dignified manner."

One March decision, from Judge Diane Lutwak in the Bronx, lays out a frequently cited analysis for judicial intervention in ERAP cases.

The court ruled in 2986 Briggs LLC v. Evans that while the stay language in state law seems "absolute … to find it to be so would raise doubts as to the statute's constitutionality."

According to Judge Lutwak, landlords have a due process right to challenge the stay.

The judge upheld her finding following reargument, though she noted in a follow-up decision that it does not warrant "the removal of all holdovers from the scope of the ERAP law's stay provision."

Attorneys who represent landlords say opinions such as Judge Lutwak's are welcome.

As of July 20, about $2.2 billion has been issued to New York landlords through ERAP, across 176,118 unique payments. But tens of thousands of additional applications are still pending. Among them are 8,468 submitted since June 30, which state officials say would require additional funding to fulfill.

"There has to be an opportunity to challenge the stay, otherwise there is no due process," said Riegel of Rosenberg & Estis.

For some clients, Riegel added, there's more to be gained by removing a tenant than recovering missed rent. Perhaps the relationship has soured, or the landlord doesn't want to lock in one more year at the current rate — a condition of accepting ERAP funds.

"For an owner to make a decision that he or she is going to live with a rent that was market during the pandemic, which is likely not market anymore … they may not want to take it," she said.

Across several decisions, including Judge Lutwak's from March, the court found that the ERAP stay did not apply because the applicant did not have a formal rental agreement with the landlord.

The ERAP applicant may have been a building supervisor whose term of employment has ended. In March, Judge Hannah Cohen in Brooklyn detailed a situation where the landlord alleged the applicants were squatters on their property.

Lifting the stay, Judge Cohen wrote that allowing those "alleged to be squatters, who are not tenants, the benefit of a stay provision of ERAP would be futile and would lead to an absurd result."

Margolin of Belkin Burden Goldman said some landlords have seen ERAP stays lifted after attesting that they do not intend to accept money from the program.

For example, in an April holdover decision, Judge Eleanora Ofshtein in Staten Island vacated an ERAP stay, noting that the landlord had submitted an affidavit stating that they "sought only possession of the premises."

"No explanation is provided as to why respondents believed that a rental assistance program would be helpful where rental assistance was not sought by petitioner," Judge Ofshtein wrote. "Therefore, this court finds that respondents are not covered by the ERAP statute and cannot seek the protections of its stay."

By contrast, judges have upheld ERAP stays on the basis that payment would at least partially resolve the landlord's grievance in the case.

In a June opinion, Judge Shorab Ibrahim in the Bronx upheld a stay in a nonpayment eviction case brought against a tenant with a Section 8 rental subsidy.

The landlord had argued that, under state policy, renters in public and subsidized housing are at the back of the queue for ERAP consideration.

Yet Judge Ibrahim said that "it is possible that respondent's application will be approved ... eventually" and that "even if ERAP ultimately pays nothing or just a portion of what is owed, while pending, the application stays the proceeding."

Holdover cases have not been exempt from this logic. In February, for example, Judge Jack Stoller upheld an ERAP stay in a closely watched holdover case in Brooklyn, where the landlord alleged $460,000 in missed rent payments.

In court, counsel for the landlord argued that ERAP would make a dent in the debt at best.

In his decision, Judge Stoller acknowledged "some criticism of ERAP stays, particularly when used by occupants who are licensees [without formal rental agreements] or when arrears are not an issue."

Yet he maintained that the state "designed ERAP to address the very kind of nonpayment of arrears that aggrieves petitioner in this matter, demonstrated by the statute's stay of holdover proceedings against a tenant as well as nonpayment proceedings."

Meanwhile, tenant attorneys welcomed a recent decision in a holdover case that found it is not a judge's place to tinker with an ERAP stay. In June, Judge David Harris in Brooklyn upheld a stay despite the landlord's saying they would not accept any funds.

"The core of petitioner's argument is that no stay is warranted because respondent is not eligible for benefits," Judge Harris wrote. "That determination is one for [the state's Office of Temporary and Disability Assistance], rather than for this court, to make."

Looking ahead to the coming months, Josephson of the Legal Aid Society said he's primarily concerned about landlords seeking to evict tenants after accepting ERAP funds, despite a general rule prohibiting rent increases or evictions for one year.

Under state law, landlords who accept ERAP can bring eviction cases against tenants who don't keep current with their rent.

"The problem will be, unfortunately, many people who got paid out on ERAP owe more than a year of rent, so they're not safe," Josephson said.

Update: This story has been updated with application data from the state.