Senate Democrats pushed back Friday against Republican efforts to correct an international glitch from the 2017 tax overhaul as part of a $1 trillion plan to lessen the economic impact of the novel coronavirus pandemic on individuals and small businesses. 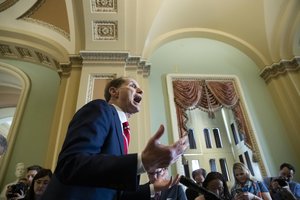 The Senate Finance Committee's ranking member, Ron Wyden of Oregon, said a provision in a coronavirus relief bill that would undo a 2017 international corporate tax provision is a "nonstarter" for Senate Democrats. (AP)

Lawmakers planned to work late into the evening Friday in hope of reaching a bipartisan agreement on what provisions to include in the Coronavirus Aid, Relief and Economic Security Act, or H.R. 748. The Senate expects to take its first procedural vote on the bill Sunday, followed by final passage a day later.

The bill, as introduced Thursday by Senate Majority Leader Mitch McConnell, R-Ky., would authorize the Internal Revenue Service to send checks up to $1,200 to individuals, delay several tax-filing deadlines and fix a host of problems with the Tax Cuts and Jobs Act

Although much of the discussion Friday centered on whether to expand unemployment benefits or directly send checks to individuals, the Senate Finance Committee's ranking member, Sen. Ron Wyden, D-Ore., said the Democrats were determined to delete an international corporate tax provision from the measure.

The legislation would restore the limits on downward attribution of the stock ownership of foreign corporations, thereby undoing a change under the TCJA that subjected some foreign entities to additional tax and reporting requirements. According to a bill summary, fixing the TCJA error will permit companies to amend their 2018 tax returns to free up critical cash for operations and payroll and significantly reduce their tax compliance burdens this year.

“That basically would give a break to foreign subsidiaries of U.S. companies,” Wyden told reporters, calling the change a "nonstarter" that Senate Democrats planned to strongly oppose.

“I think the administration will have a very tough time trying to defend that," Wyden said. "It has nothing to do with coronavirus, and it's just fundamentally unfair.”

“There's some things that aren't totally agreed to, [but] I think everybody knows we've got to get this done,” he said.

The federal government’s actions, Grassley said, have caused a spike in unemployment rates.

The bill would also correct the so-called retail glitch in the TCJA by allowing companies to immediately write off expenses related to physical improvements instead of depreciating them over the course of 39 years.

Lawmakers from both parties have sponsored legislation to fix the depreciation problem because it affects restaurants and retailers in their states and congressional districts. But Democrats have repeatedly said that an expansion of the earned income tax credit would be required to fix the 2017 tax law.

The bill also provides that businesses can carry back losses from 2018, 2019 and 2020 for up to five years, as in the past. In addition, net operating losses would temporarily not be subject to a taxable income limitation, meaning they could fully offset income.

The bill is the third major piece of legislation that Congress has worked on this month to address the outbreak of coronovirus, which causes COVID-19 disease. President Donald Trump signed into law the Families First Coronavirus Response Act, or H.R. 6201, on Wednesday. Previously he signed an $8.3 billion measure designed to help federal and state health care agencies respond to the virus.