Despite the IRS' extension of tax filing and payment deadlines in response to the novel coronavirus pandemic, the lack of deadline uniformity for informational returns and estimated tax payments for 2020 will add complexity for corporations and individuals. 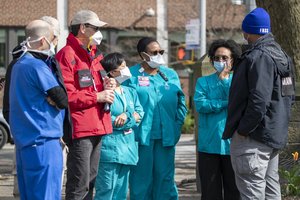 The spread of the novel coronavirus pandemic to the United States has prompted the Internal Revenue Service to postpone some tax filing and payment deadlines, but not all. (AP)

After President Donald Trump declared a national emergency because of the coronavirus, the Internal Revenue Service on March 20 issued Notice 2020-18

of the Internal Revenue Code, the IRS has broader powers, including the ability to extend tax deadlines, when the president declares a federally declared disaster.

and base erosion and anti-abuse tax

will be due July 15. Then, on March 27, the IRS issued another notice

updating the prior guidance, such that federal gift and generation-skipping transfer tax payments due on April 15 will also be postponed until July 15.

Meanwhile, deadlines such as the remaining quarterly estimated taxes due in 2020 for individuals and corporations, as well as other informational reporting deadlines, were not extended.

The disparity in tax deadlines means there are many traps for unwary individuals and corporations, according to Rebecca Chappell, who is of counsel at Venable LLP.

"Everyone is going to be confused now [and] it can cause headaches for everyone," she said. "Usually there's some certainty with deadlines … but now it's really complicated, and I think the concern is that taxpayers could inadvertently miss a filing deadline or a payment deadline, not because they're not trying to comply, but because the rules have become so complicated."

For example, U.S. citizens who live abroad typically have to file a Form 114, Report of Foreign Bank and Financial Accounts, with the Financial Crimes Enforcement Network to disclose any assets held in foreign financial institutions. Traditionally FBARs are filed on the same day someone files a federal tax return, but the forms usually aren't submitted together, Chappell said.

The IRS said in its FAQs that informational returns are not postponed, which could create some confusion and even result in a U.S. citizen living abroad inadvertently neglecting to file an FBAR, she said. FBARs receive an automatic extension until Oct. 15, which means a U.S. citizen living abroad will still file on time if an FBAR is submitted with his or her tax return by July 15, but someone may still forget to file an FBAR in July or by October, which could result in a monetary penalty, Chappell said.

There could also be administrative problems for companies, because some do not have tax years that end on Dec. 31, so those whose taxes are not due on April 15 did not actually have deadlines extended by the IRS, she told Law360.

For example, some businesses' tax years end on Jan. 31 instead of Dec. 31, which would make the tax return due May 15, one month after the regular April 15 tax filing deadline, but these non-calendar-year organizations do not get an extension from the IRS, Chappell said. Tax-exempt organizations operating on a calendar year must still file their Form 990-T returns by May 15, and this deadline has also not been extended, according to the IRS.

"So in addition to the confusion and the administrative headache, there's also this element that not all taxpayers will get this relief just because of the luck of the draw with timing," Chappell said.

What's more, different states also have different deadlines, so it may be difficult and bewildering for either an individual or a corporation to track all the state tax deadlines along with federal filing and payment obligations, she said. For example, New York extended its tax deadlines to July along with many other states, while Hawaii's extended deadline is set for July 20, but as of Tuesday, New Jersey Democratic Gov. Phil Murphy had not signed into law legislation that would extend that state's tax deadlines.

An additional complication is that international companies with subsidiaries in the U.S. now will not know what their U.S. tax bills will be for another three months, Chappell said. That delay until July 15 can flow into their financial reporting and accounting and could affect an international business' foreign tax credit calculations, which go onto a foreign tax return, she said.

"So changing the timing of when you know what your actual U.S. tax is going to be does have a bit of a ripple effect in some of your accounting and international tax filings as well," she said.

Certain deadlines are not extended for individuals and corporations that must make estimated tax payments in 2020, which can make figuring out these payments quite difficult, according to Tony Nitti, a CPA and partner at RubinBrown LLP.

In 2020, corporations generally have to make estimated tax payments if they expect to owe tax of $500 or more when a return is filed. Under Section 6655

, individuals have the same first three deadlines to pay estimated taxes, but the final deadline is Jan. 15 of the following year. An individual must correctly estimate and pay the smaller of 90% of one's total tax due for the current year or use a safe harbor by paying 100% of the taxes paid in the prior year. That 100% rises to 110% if adjusted gross income is more than $150,000 for an individual or a married couple filing jointly, or $75,000 for married couples filing separately, according to the statute.

When H.R. 748, the Coronavirus Aid, Relief and Economic Security Act, was introduced in the Senate, it provided a delay of estimated tax payments for corporations as well as individuals until Oct. 15. But when Trump signed the bill into law on March 27, the final version eliminated the extended deadline relief of estimated taxes for both individuals and corporations.

As a result, Nitti told Law360, individuals and corporations that must pay estimated taxes have tax bills due June 15 for estimated payments in 2020, when they may not have even filed their 2019 tax returns yet, since those aren't due until July 15.

"The payments that otherwise would be due on April 15 would be due on July 15," Nitti said. "So that's quarter one, but quarter two is still due June 15, before that quarter-one payment is due."

To make things even more confusing, it's unclear how overpayments in the first quarter may or may not be applied to a payment for the second quarter, he said. Normally if a taxpayer overestimates an estimated tax payment in quarter one, the IRS will credit that overpayment to the second-quarter payment. With the deadline extensions, tax practitioners want to know how this will work if one overpays for the first quarter on July 15 but has already paid the second-quarter estimate one month earlier, on June 15, Nitti said.

While taxpayers who have to make 2020 estimated tax payments can rely on the safe harbor by, depending on income, paying 100% or 110% of the quarterly payments they made in 2019, a timing problem still exists, according to Paul Miller, a certified public accountant and managing partner at Miller & Co. LLP.

To use the safe harbor, one must rely on information from 2019 tax returns, which are due after the June 15 second-quarter estimated payment deadline, Miller said. So a person who doesn't file until July 15 will not have information to make the June 15 payment, he said.

As a result, many people with estimated taxes are still filing their tax returns early in order to calculate the second estimated payment, he said.

"So if you can file in April, you should file," Miller said.

However, there's a caveat with this advice, because filing one's 2019 taxes sooner rather than later may mean someone may not receive payments under the CARES Act, he said.

Under the new law, the IRS will remit $1,200 payments to individuals and $2,400 to married couples filing a joint return. These payments will be phased out for those individuals with income above $75,000 and eliminated for individuals earning over $99,000. The phaseout for married couples starts at $150,000, and married couples who file jointly and earn over $198,000 will receive no stimulus money, according to the statute.

These cash amounts are determined based on one's 2019 tax returns, but if a taxpayer has not yet filed a tax return for 2019, then the amount is based upon one's 2018 tax return, according to the legislation. If someone who makes estimated tax payments made more money in 2019 than in 2018, he or she may qualify for the payments but would need to be very careful about when to file a tax return, Miller said.

"The best advice I can give to someone who wants to receive a stimulus refund without filing their return, but is required to make a payment in June 2020, is to pay what your estimated tax payment was in June 2019," he said. "That way, you have made an estimated tax payment. You may have underpaid or overpaid, but at least you've made a payment and complied with the law."