The two federal tax-writing committees are examining new tax incentives aimed at helping small businesses and their workers weather the economic storm unleashed by the new coronavirus as they weigh plans for a potential new relief package on Capitol Hill. 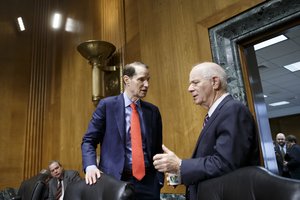 Democratic Sens. Ron Wyden, left, and Benjamin Cardin, right, have been working to promote a plan to allow advance tax rebate checks for small-business operators with up to $1 million in revenue. (AP)

Both parties are examining a range of tax proposals, including those aimed at bolstering small businesses by expediting tax refunds, easing certain Internal Revenue Service deadlines and providing tax incentives to help cover basic needs. Tax writers in both chambers also say they will examine whether a $349 billion loan program and an employee retention tax credit in the newly enacted $2 trillion Coronavirus Aid, Relief and Economic Security Act,

or CARES Act, will help Main Street businesses and their workers survive virus-related shutdowns and curbs.

Top tax writers in both chambers have made clear they want to continue to help the nation's 30 million small businesses as they develop ideas for additional relief legislation.

"We are going to go for more," Sen. Ron Wyden, D-Ore., the top Democratic tax writer, told Law360, referring to small-business tax proposals for a potential fourth relief package to deal with a virus-affected economy.

Such a measure would follow up on items in the rescue law, other relief measures in the Families First Coronavirus Response Act

and a virus-related supplemental spending law.

Wyden has been working with Sen. Benjamin Cardin, D-Md., to promote a plan to allow small-business operators with up to $1 million in revenue and up to 50 employees to get advance tax rebate checks equal to 30% of gross revenue from the previous year, capped at $75,000. They are concerned about the economic health of businesses ranging from retail shops and restaurants to small manufacturers and technology startups.

Other options on the table include a range of proposals for reshaping the tax code to help businesses deal with lost revenue and routine bills. For example, Rep. Ron Kind, D-Wis., has promoted H.R. 6354, a bipartisan proposal for a one-time emergency tax credit to cover rent and mortgage payments. Kind has been working with two GOP tax writers — Reps. Mike Kelly, R-Pa., and Tom Rice, R-S.C. — to try to rally support for the proposal.

And Rep. Brad Schneider, D-Ill., has been exploring other ways to help small businesses, possibly by expanding the new law's five-year net operating loss carryback provision for losses in 2018, 2019 and 2020 to losses in other years. The law provided the latest in a series of changes to tax treatment of such losses, including the Tax Cuts and Jobs Act.

As they vet such ideas, key players in both chambers said, they continue to hear from many small-business owners worried about survival under prolonged virus restrictions.

"We don't want those small businesses to give up and shutter their doors forever, decimating our downtowns and causing permanent job loss for the workers who are so much a part of their business," Sen. Susan Collins, R-Maine, said on the Senate floor last week.

Wyden and Cardin said the CARES Act was designed to encourage worker retention and furloughs in lieu of layoffs. Unemployed and furloughed workers would qualify for expanded jobless aid for up to four months, and businesses would be able to delay payment of their share of the Social Security payroll tax — 6.2% of wages — for 2020, with two equal payments due by year's end in 2021 and in 2022. The payroll tax deferral was a compromise after Democrats opposed President Donald Trump's call for a payroll tax holiday and some business advocates warned that Democrats' proposals for broader paid leave mandates could lead to payroll tax hikes.

The law's paycheck protection program allows small businesses with fewer than 500 employees to get loans — capped at $10 million — which would match average monthly payroll for two and a half months and become grants if used for qualified items such as wages, rent, mortgage interest, health care and other benefits.

Holly Wade, director of research and policy analysis for the National Federation of Independent Business, said in an email to Law360 that the new loan program was "the type of plan small businesses desperately need to help them through this crisis."

And Rep. Dan Kildee, D-Mich., a chief deputy whip and a tax writer, said he believed the program would draw heavy interest, meaning there might be a need for more funding.

However, Peter Nigro, a finance professor at Bryant University and former Office of the Comptroller of the Currency economist, told Law360 the loan program would not be "sufficient to help out most small firms" and likely would put "less-sophisticated, smaller ones in the most need at the back of the line."

"Small businesses simply will not take out loans to cover payroll with no revenue coming in, putting these loans at risk of not being eligible for forgiveness," Ballantyne said.

Wyden and Cardin pushed for another option in the new law for small businesses that forgo such loans: an employee retention tax credit equal to 50% of up to $10,000 of workers' wages. For qualifying businesses with up to 100 workers, the credit would cover all workers whether they worked or not. But for larger businesses, the credit would be available only for salaries paid to certain employees who did not work in a calendar quarter.

Cardin and other supporters of the employee retention provision said it could be a model for tailoring other tax incentives for businesses of different sizes.

"We are trying to get money to small businesses by giving them relief on their taxes," Cardin told Law360. "It could be payroll taxes. It could be income taxes."

Dave Ketchen, professor of management at Auburn University, said the new loan program and tax credit would be enticing to small-business operators facing tough choices on whether to keep staff and stay open. For example, the incentives could sway small-business owners who are considering closing shop to cut losses but are reluctant to lose skilled employees to businesses that need workers, such as grocery stores, cleaning services, logistics companies and delivery services.

"If the financials are slightly tilted toward closing the doors, factoring employee retention into the equation is likely to suggest keeping them open," Ketchen said.

With such tradeoffs in mind, some lawmakers said that consensus support for new incentives likely would hinge partly on whether the new loans and worker retention credit are viewed as effective. Some Democrats have called for a replay of the new law's virus relief payments and sending $1,200 to adults — and $500 to children — for individuals earning up to $75,000 and married couples earning up to $150,000.

Senate Budget Committee Chairman Mike Enzi, R-Wyo., a tax writer and former shoe store owner and accountant, said it would take time to gauge the impact of the law as a life preserver for small businesses because many of them are closed.

"It's too early to tell yet," Enzi told Law360, when asked about prospects for follow-up measures to help small businesses stay alive. "This is the biggest experiment the United States has ever had."