Opportunity Zone Bill May Help Cos. That Missed PPP Funds

A proposal to allow small businesses affected by COVID-19 to qualify for opportunity zone investments could shore up the finances of companies that missed Paycheck Protection Program funds, but securing those investments may not be easy. 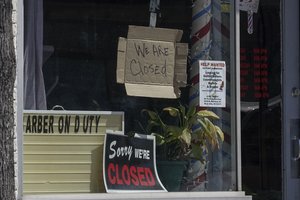 Closed signs were posted in some businesses May 13 in Milwaukee. (AP)

Reps. John Curtis, R-Utah, and Henry Cuellar, D-Texas, introduced the Small Business Opportunity Zone Act in April, which would allow small businesses affected by the novel coronavirus pandemic to be classified qualifying businesses in which investors can receive favorable opportunity zone tax benefits. The legislation is meant to create a new incentive to encourage investments in smaller companies that have been impacted by COVID-19 through supply chain disruptions, staffing changes, decreases in sales or customers, or a partial or full suspension of business.

The measure may dovetail well with the Paycheck Protection Program, which provided $350 billion in loans to small businesses, but for which money has quickly run out, resulting in many companies not receiving financial assistance, said Joseph B. Darby III, a tax partner at Sullivan & Worcester LLP.

"This bill would be a wonderful supplement to the PPP and help small businesses when they may not have gotten as much from the program as they needed to survive," he said. "It can't do anything but help … but the question is whether people have the ability and resources to put cash in right away."

The PPP was created through the Coronavirus Aid, Relief and Economic Security Act

to allocate $350 billion in loans to small businesses but has drawn criticism because many of the loans went to larger organizations instead of to smaller companies. For example, the Los Angeles Lakers basketball team returned $4.6 million in PPP money after the U.S. Department of the Treasury criticized the organization because the money is meant to help small businesses pay workers during the coronavirus pandemic.

PPP loans are designed to provide incentives to struggling small and medium-size businesses to continue paying workers and providing benefits through partially forgivable loans to cover salaries, insurance, rent and other costs. Employers with fewer than 500 workers would receive the amounts they put into payroll costs and mortgage payments and interest eight weeks after loan origination, with some limitations. This forgiveness is also available to businesses that rehire workers who have been laid off.

One of the major criticisms of the PPP was that it defined small businesses as 500 employees or less, which is large compared to many small companies that actually employ far less, Darby told Law360. But the proposed Small Business Opportunity Zone Act would specifically create a new investment category that would allow an opportunity fund to invest in a qualified opportunity zone business affected by COVID-19 as long as the business's annual revenues do not exceed $999,999, according to the bill.

"Having less than $1 million of revenue is a very low threshold, so it's not helping some of the large [businesses that] got PPP handouts," Darby said. "Compared to the PPP program, which defined small businesses to be big, this is much more targeted to help small business."

However, if the bill is passed, it is unclear how quickly these businesses could access cash from qualified opportunity zone funds, Darby said.

While the bill expands investments in a two-tier structure by including COVID-19 small businesses as QOZBs, because of the current economic climate, it is unclear whether there will be a lot of investors who will have access to funds they can invest into these businesses, Darby said. However, what may happen is that small business owners could quickly invest in their own businesses, he said.

"If it's a small business and the owner is doing it, they can do it in 24 hours," Darby said. "They can put the money and drop it into their business and get the economic enhancement. It can happen really fast. It has the potential to be a fast and effective way to help small businesses."

The bill also would overhaul other parts of the opportunity zone program by freezing the capital gains rate, extending gain deferral and broadening qualifying QOF investments, which would help small businesses as well as larger opportunity zone projects, according to Marc L. Schultz, a tax partner at Snell & Wilmer LLP.

, if investors put qualifying capital gains into funds by Dec. 31, 2019, they receive 15% of forgiveness on taxable gains from the investment if held for seven years, and 10% forgiveness if held for five years.

Both the seven- and five-year windows originally end Dec. 31, 2026, but the bill would extend the outside inclusions date to seven years after the day that the investment is acquired. The bill would also allow "any investment in a qualified opportunity fund" to receive the related QOZ tax benefits, which means cash can be used instead of capital gains.

Extending the tax benefits beyond 2026 while removing the requirement that only capital gains can be put into a qualified opportunity will make opportunity zone investing even more attractive to investors because they can use cash to get the full 15% tax forgiveness, Schultz said.

"That broadens the base of potential investors by removing the fact that you have to have the gain, which will make it more attractive for investors as their money sits on the sidelines," he told Law360.

Another key change is that the bill would freeze the capital gains rate so the tax rate on the gain, when realized, would be the same rate that applied when an investor first put the cash or gain into a fund, according to the bill.

Freezing the capital gains rates applies to opportunity zone investments and would help encourage investments, both for smaller and larger projects, especially if the government decides to increase capital gains tax rates in the future, Schultz said.

"It's hard to look at it and say the government won't need more revenue down the road and one of the ways to get that revenue other than cutting costs is to raise the tax rates," he said. "So if you think tax rates are going to go up in 2026, then what this does is freezes the tax rate on your opportunity zone investment."

Despite the benefits, these small businesses may not receive these funds quickly — when they most desperately need it — because other parts of the opportunity zone law must still be followed, according to Lisa M. Zarlenga, a tax partner at Steptoe & Johnson LLP.

"When I first read the bill I thought it was automatically deemed to be a QOZB, but then I realized you still have to meet the other qualifications to be an opportunity zone business," she said. "That can be viewed as a guardrail or additional hoops to jump through."

While the bill gives opportunity funds a year to invest in these small affected businesses without having to meet the 70% asset test, a fund would still would have to meet other requirements such as the active business test and gross receipts test, Zarlenga said. At the QOZB level, at least 50% of the gross income needs to be from a qualified opportunity zone and the QOZB can't have more than 5% of assets as qualified financial property, she said.

And just because the investment into small businesses may be available does not automatically mean investors may know of these opportunities, which may delay how quickly a business may get more funding, too, Zarlenga added. Investors generally need time to find investments and many deals have been frozen due to COVID-19 since it is harder to do due diligence, so deal machinery would need to be up and running for funds to get to small businesses, she said.

"It may not be an immediate source of cash unless they have investors set up who are willing to contribute something," Zarlenga said. "I guess the question is, do you already have relationships with developers or investors? Because some of these small businesses may not."