Senate Republicans' forthcoming proposal to address the novel coronavirus pandemic will not include a payroll tax break, a priority of President Donald Trump, but it will include another round of economic stimulus payments, Treasury Secretary Steven Mnuchin said Thursday. 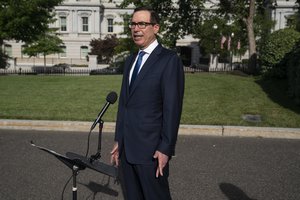 Trump has repeatedly insisted that Congress pass a payroll tax break in response to the pandemic, but the soon-to-be-released Senate GOP plan will not include one, Mnuchin told reporters. Trump understands that a payroll tax cut is more of a long-term policy, he added.

The plan will, however, propose another round of direct payments to Americans, Mnuchin said.

"The president is very focused on getting money quickly to workers right now," he said. "The payroll tax takes time. So we'll come back and look at that."

In lieu of a payroll tax cut, Republicans will propose another round of economic stimulus payments in August at the same level as those that were authorized in March under the Coronavirus Aid, Relief and Economic Security Act

"We've proven we can deliver those 50 million payments quickly, whereas the payroll tax cut would come in over four or five months," Mnuchin said. "Our proposal is the exact same provisions as last time."

Trump has consistently voiced support for a payroll tax cut and has even said he might veto legislation that doesn't contain the proposal, which he believes would help businesses rehire workers who lost jobs as businesses closed during the pandemic.

White House Chief of Staff Mark Meadows said the exact timing is complicated by next week's funeral for the late Rep. John Lewis of Georgia, the end of federal unemployment benefits and upcoming school reopenings.

Mnuchin and Senate Republicans are working on a $1 trillion legislative package to prop up the U.S. economy and seeking a compromise on competing proposals to extend unemployment benefits, provide another round of emergency stimulus checks, protect businesses from liability lawsuits and fund state efforts to weather the crisis.

The Senate legislation will likely extend federal unemployment insurance so it replaces 70% of lost wages, Mnuchin said. It will also likely provide funds for retrofitting and reopening schools, he said.

The GOP plan will also include a "turbocharged" tax credit for rehiring workers, tax credits for businesses that make their work environments safer and provide personal protective equipment, Mnuchin said.

House Republicans on Thursday also unveiled their list of legislative priorities they hope will be included in the next round of virus relief legislation.

Brady, R-Texas, said lawmakers want to repeal the requirement in the 2017 tax overhaul law that companies must amortize research and development costs beginning in 2022, and they also want to make permanent the law's full expensing provisions.

Republicans also suggested creating a temporary, 30% tax credit for machinery used in the U.S. to manufacture drugs and medical devices. Another proposal would provide a 10.5% credit on profits from the sale of active pharmaceutical ingredients, cutting the corporate tax rate in half.

Details of the upcoming GOP virus relief legislation have been in flux all week and could change as lawmakers negotiate what is essentially a first draft of the Senate's proposals.

Sen. James Lankford, R-Okla., told reporters that lawmakers were attempting to "predict the future" of the coronavirus, knowing it might be the last chance to make legislative changes to help the economy. "The last thing we want to do is slow the economy … or leave people out," he said.

Sen. John Cornyn, R-Texas, had said earlier the Republican plan would include a payroll tax break, but didn't share details of the size of the cut or its duration. Cornyn characterized the developing plan detailed by Senate Majority Leader Mitch McConnell during a Tuesday lunch as a "chairman's mark" in the negotiations among the House, Senate and White House.

A senior Republican aide previously told Law360 that the Senate GOP plan would contain language similar to a proposal by Sen. Rob Portman, R-Ohio, for a payroll tax credit to cover employers' expenditures to protect workers from COVID-19.

Lawmakers last passed major coronavirus relief legislation in March, directing payments up to $1,200 to many Americans, creating a forgivable-loan program for employers to meet payroll and enacting various disaster tax relief measures under the CARES Act.

Since then, the Democratic-controlled House has passed the Health and Economic Recovery Omnibus Emergency Solutions Act, which would repeal recent limitations on net operating loss carrybacks and would temporarily eliminate the cap on state and local tax deductions.

McConnell, R-Ky., said that his chamber wouldn't be considering the House bill, which most Republicans have shunned as too expensive.

Update: This article has been updated to include comments by Grassley, Brady and Lankford.