Democratic Convention To Signal Start Of Fight Over TCJA

Former Vice President Joe Biden's planned formal acceptance of the Democratic presidential nomination on Thursday will represent the beginning of a fierce partisan fight over the reduced corporate and individual rates and other pillars of the 2017 GOP federal tax overhaul. 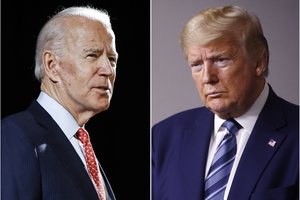 Former Vice President Joe Biden proposes increasing the corporate rate to 28% and the top individual rate to 39.6%. Both rates were reduced under the Tax Cuts and Jobs Act, signed by President Donald Trump. (AP)

Supporters of Biden predict Democrats will be unified behind his tax proposals such as lifting the corporate rate to 28% and raising the top individual rate to 39.6% from 37%. Those rates were reduced under the Tax Cuts and Jobs Act

. In lieu of that law's $10,000 cap on state and local tax deductions, he has proposed to cap benefits from all itemized deductions at 28% of their value, reducing benefits for people paying tax rates higher than 28%

Biden would also require corporations to pay an alternative minimum 15% rate on book profits reported to investors of more than $100 million, unless they would pay more in regular corporate income tax. His plan would tax capital gains as ordinary income for taxpayers earning more than $1 million and require unrealized gains to be taxed at death. His plan would also phase out the qualified business income deduction for taxpayers with incomes of more than $400,000, provide incentives for renewable energy and for first-time homebuyers and create a new renters' credit for low-income workers and their families.

While President Donald Trump develops his own tax agenda, some Republicans said they believed he would continue to promote his signature tax law and voiced hope he would support the expansion of temporary business incentives such as the full expensing of business equipment.

Key players on both sides say they believe the election will put a spotlight on the tax overhaul and give voters a clear choice between expanding or shrinking Trump's tax cuts. The looming fight over high-profile tax issues will come against the backdrop of stalled talks in Congress on a $1 trillion Senate GOP pandemic response plan and relief measures passed by the House in the $3 trillion Health and Economic Recovery Omnibus Emergency Solutions Act.

Rep. Cedric Richmond, D-La., a national co-chairman of the Biden campaign, said the contrast between the GOP's defense of the tax overhaul and Biden's vision for reshaping it will be a crucial issue in the presidential race. He predicted Democrats would align behind Biden's vision for dialing up certain rates and curbing other items in the tax overhaul in order to raise revenue to pay for priorities aimed at helping working families.

House Ways and Means Chairman Richard Neal, D-Mass., said he envisioned a sweeping review of the tax overhaul but has stopped short of saying how he would carry out his party's tax agenda if Democrats win the race for the White House and take control of both the House and Senate.

"We're going to take a look at the whole thing. I think a discussion of the tax proposal that they did in December 2017 — a full review of it — makes good sense," Neal told Law360.

Lawmakers and voters remain split along party lines on whether the 3-year-old tax law has been successful. A March poll conducted by the Pew Research Center, a nonpartisan public opinion survey group, found the law had approval from 71% of Republicans and disapproval from 79% of Democrats.

Democrats argue that economic setbacks caused by the novel coronavirus, which causes the respiratory disease COVID-19, will require a restructuring of the tax code and major spending initiatives on health care, education, climate change and other priorities. And they point to polls showing support for several of Biden's tax goals. For example, the same Pew survey found that 62% of Americans feel some corporations do not pay their fair share in taxes, and that 60% think the same of wealthy families.

On the other side, Trump has not yet offered a comprehensive tax blueprint. He said Aug. 8 that he would propose reducing taxes for middle-class families and for investors with capital gains. And he has vowed to turn his unilateral order for a four-month payroll tax deferral for workers making less than $104,000 into a payroll tax cut.

As Trump weighs proposals for tax cuts, Sen. John Cornyn, R-Texas, a senior member of the Senate Finance Committee and former majority whip, made clear Republicans would emphasize the disparity between the GOP's focus on another round of tax cuts and Biden's plan for tax increases. He and other GOP lawmakers are trying to promote ideas such as broader incentives for research and refundable business credits.

"That's not the way to start an economic recovery," Cornyn told Law360, referring to Biden's plans to roll back parts of the TCJA.

In some ways, the looming 2020 fight over the tax overhaul resembles a similar battle in the 2018 midterm elections, when the GOP lost control of the House but gained Senate seats. Since then, both parties largely have steered clear of major revisions to the 2017 law. One exception is the inclusion of a contentious allowance for a five-year carryback of net operating losses in 2018, 2019 and 2020 enacted in March in the Coronavirus Aid, Relief and Economic Security Act.

The TCJA had done away with NOL carrybacks.

But Rep. Kevin Brady, R-Texas, the ranking member on Neal's committee, said he believed voters now would support the GOP's vision for building on the tax overhaul to spark an economic recovery.

"Americans are paying attention to their pocketbook," Brady told reporters last month. "Frankly, I was pleased to see the vice president acknowledge that they would turn back the clock and go back to the Obama-Biden economy of stagnant paychecks, slow growth and jobs moving overseas. This will be a terrific contrast."

Brady and other Republicans are pointing to the potential price tag for Biden's tax plan. The Tax Foundation, a conservative research group, has projected that Biden's overall plan would raise $3.8 trillion in revenue over 10 years, with about $3 trillion in income taxes — including $1.3 trillion from a higher corporate rate — and $800 billion in Social Security payroll taxes on a taxpayer's earnings over $400,000.

In response to GOP critiques of his plan, Biden has countered by emphasizing his proposed tax hikes will hit corporations and wealthy taxpayers, and not anyone making less than $400,000. Biden said in a July 9 speech outlining his tax plan that "investing in American people and working is more important" than incentives in the tax overhaul, which he said were "predominantly handed out to the super wealthy."

After this week's Democratic National Convention, Biden could face pressure to provide more details about whether and how he would try to tailor his tax plan to deal with the fallout from the novel coronavirus and deal with a number of Democratic proposals on Capitol Hill.

If Democrats sweep the elections, they will need to resolve disputes over fiscal priorities next year as they try to reach an intraparty accord to clear the way for a fiscal 2022 budget resolution, which would be required to frame the likely vehicle for Biden's tax plan: a budget reconciliation bill shielded from Senate filibusters.

To advance such legislation, House Budget Chairman John Yarmuth, D-Ky., said Democrats would need to work out differences on a number of Biden tax proposals.

For example, Yarmuth told Law360 that Democrats might need to cut a deal on a new corporate rate "at least in the mid-20s" if they cannot agree on Biden's somewhat higher goal of 28%.

He said other Biden tax proposals also may require compromise.

"The corporate rate will be a first start," Yarmuth said.