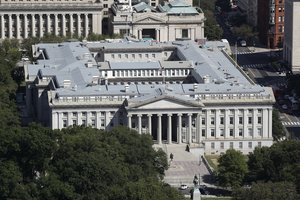 A proposed regulatory definition of foreign income tax — one that wouldn't allow tax credits for digital taxes paid overseas — was among wide-ranging guidance that Treasury issued Tuesday. A day later, a department official said the proposed definition, which is based on traditional requirements for a company's taxable presence offshore, was issued as countries pursued measures that are perceived as "inconsistent with international norms."

The proposed language isn't the only place where Treasury is reacting to the larger international tax landscape. Specialists said a separate final rule, one whereby companies would essentially have less domestic income from foreign sales that qualifies for a tax deduction, reflected Treasury's sensitivity to the possibility that other countries could see the underlying statute as subsidizing U.S. exports. Meanwhile, another rule could cause administrative headaches for businesses with foreign tax redeterminations.

Under a proposed regulation, offshore income taxes aren't creditable unless they have the character of "an income tax in the U.S. sense." According to the proposed rule, foreign taxes are creditable only if they're based on sufficient nexus to the country, such as operations or employees.

Jason Yen, an attorney-adviser to Treasury, said the jurisdiction nexus requirement is "something that we have been thinking about for a long time as the Treasury has started to see these novel extraterritorial taxes that we view was inconsistent with international norms."

Speaking Wednesday during the American Bar Association Section of Taxation's fall meeting, Yen said these taxes are no longer speculative because countries have adopted and enforced them.

"We wanted to make clear the position that these taxes should not be creditable," he said.

The clarification followed Treasury Secretary Steven Mnuchin's raising of "serious concerns" in late 2019 over a plan by the Organization for Economic Cooperation and Development to overhaul global tax rules. In a letter to OECD Secretary-General Angel Gurría, Mnuchin said the proposal, which would grant market countries increased taxing rights based on sales or online use in their jurisdictions, could depart too much from existing global tax norms.

Mnuchin's letter was written one day after the Office of the U.S. Trade Representative issued a report proposing steep tariffs on French products because of that country's 3% digital services tax.

France has since agreed to delay its tax while the OECD pursues an international consensus. The country's measure wouldn't target U.S. businesses directly, but Treasury officials have said the levy — referred to as a GAFA tax, after tech giants Google LLC, Apple Inc., Facebook Inc. and Amazon.com Inc. — will disproportionately affect U.S. corporations.

Meanwhile, Treasury's proposed rule puts the burden of those additional taxes on U.S. companies, according to Adam Kool, a partner at Kirkland & Ellis LLP.

"It's one thing to threaten a tariff for a jurisdiction that's going to enact these taxes on the theory that they're hurting U.S. business," he said. "Arguably, this approach is exacerbating that fact, rather than ameliorating it."

Not only would U.S. companies be subject to digital taxes, but those measures won't be creditable, therefore increasing the likelihood that they "have substantial double tax on what is essentially the same income," Kool said.

Another area of the guidance that signaled Treasury's response to the larger international tax landscape involved a final rule that essentially said companies can't apportion research and experimentation, or R&E, expenses to increase their foreign-derived intangible income. Earnings classified as FDII get a tax deduction under the statute, which European Union officials criticized after it was enacted as part of the 2017 Tax Cuts and Jobs Act

After Treasury issued proposed rules in December, business groups asked that exclusive apportionment — the concept of apportioning deductions for R&E costs based on the source of income — apply not just for calculating foreign tax credits under Internal Revenue Code Section 904

. Commenters asked that exclusive apportionment also apply for calculations under FDII, a measure that provides a deduction for domestic income from sales to foreign buyers, for foreign use.

U.S. income classified as FDII qualifies for a 37.5% deduction and will ultimately be taxed at 13.125%, compared with the 21% corporate rate. If companies could use exclusive apportionment for FDII, then if at least 50% of their R&E activity was in the U.S., half of their R&E expenses would be apportioned against income that isn't FDII-eligible. Accordingly, companies would have more earnings under FDII, and thus more income to qualify for the deduction.

Treasury rejected this request in the final rules, which narrow exclusive apportionment to calculating foreign tax credit limits under Section 904.

Even though this result is disappointing, it does allow for a more streamlined calculation approach, according to Enrica Ma, a partner at McDermott Will & Emery LLP. If exclusive apportionment were allowed for FDII, she said, companies would need to run parallel computations: one for FDII and one for Section 904.

"It's very hard to see how you can intertwine the two things in one computation," she said. "You have built-in assumptions in different steps … and I think those could be manipulated."

In the final rules, Treasury said adopting R&E apportionment solely to increase the amount of deductible FDII "would be inconsistent with the United States position … that the FDII regime is not intended to provide a tax inducement to shifting activities or income." The regime was designed to neutralize whether income is earned domestically or through a controlled foreign corporation, or CFC — a position the U.S. has stated before the OECD's Forum on Harmful Tax Practices, Treasury said.

The original FDII provision was met with criticism shortly after it was enacted, including claims from a European Commission official that the measure may violate global trade rules.

Given the U.S. position with the OECD and the general global pushback regarding the FDII regime, this rule wasn't entirely surprising, according to Jamison Sites, a senior manager at RSM US LLP.

"Absent this rule, there could arguably be a distortion between the treatment of R&E expenditures of a domestic corporation compared to a CFC," he said. "Treasury has been careful to make sure FDII is not seen as a tax incentive for moving activities and income."

In a similar vein, Kirkland's Kool said Treasury wanted to minimize the extent to which FDII could potentially be viewed as an export subsidy. He noted that in the preamble, Treasury is "saying there's sensitivity there."

In terms of administrative relief, companies likely found the final rules lacking for situations in which they need to alert the Internal Revenue Service about changes to their tax liabilities — a procedure that became more complicated after the TCJA was enacted.

Before the tax overhaul, foreign tax credits became available when companies distributed offshore earnings from multiyear pools. If a corporate taxpayer redetermined its foreign tax payment after filing its return with the IRS — following an offshore audit, for example — the company could turn to the pooling system to account for this change.

The TCJA's repeal of this pooling regime means that companies with foreign tax redeterminations must file amended returns in a process Treasury outlined in the proposed regulations from December. During a hearing on the proposed rules in May, practitioners asked for more flexibility, citing the administrative burden of filing amended returns.

The final rules rejected comments asking for changes to the notification procedure, including requests for a de minimis threshold. Treasury noted that IRC Section 905

, as amended by the TCJA, "mandates retroactive adjustments to U.S. tax liability when foreign taxes claimed as credits are redetermined."

As Sites saw it, "many of us were hoping that Treasury could find a way to provide some administrative relief, but ultimately it appears the statutory language of 905 was too restrictive."

He added that Treasury "did leave some room for hope" by stating it will continue to evaluate whether new forms or streamlined processes can be developed.