One of former Vice President Joe Biden's key tax proposals, a 15% corporate minimum tax based on financial earnings rather than the tax code, could face opposition from critics who claim it would hit growth at a key time for the economic recovery. 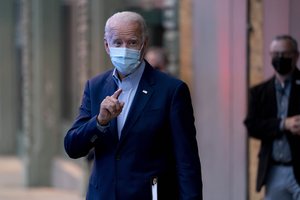 Democratic presidential nominee Joe Biden has tweeted that "no company pulling in billions of dollars of profits should pay a lower tax rate than firefighters and teachers." (AP Photo/Andrew Harnik)

The Democratic presidential nominee has touted the proposal as a way to catch companies that use creative planning to avoid paying any tax to the Internal Revenue Service, as part of his overall philosophy of making the tax code and economy fairer. But the tax is likely to reduce the tax benefit of immediate expensing, the research and development credit and other incentives meant to encourage corporate spending.

"Really, any timing benefit that Congress enacted to encourage an activity could be wiped out," said George Callas, a former Republican congressional staffer and a managing director at Steptoe & Johnson LLP. "It would claw back many of the tools Congress used during recessions."

The agenda item could create some complex political clashes as both parties balance growing anger at corporate tax avoidance and an economy slowly climbing out of the coronavirus recession.

Both Biden and a key rival for the Democratic nomination, Sen. Elizabeth Warren, D-Mass., proposed variations on the idea to create a minimum tax for corporations, based on the financial statements they report to shareholders, also known as book income. Financial accounting and tax accounting can have dramatically different rules for measuring and timing income, and recent reports of companies with zero or negative effective tax rates, despite surging profits, riled advocates of overhauling the tax code.

Biden's campaign said that as president he would impose "a 15% minimum tax on book income so that no corporation gets away with paying no taxes." According to news reports the campaign has promoted, the tax would apply to companies that report U.S. net income of $100 million or more, but pay little or no income tax in the same year.

While companies can employ many different planning strategies to lower their effective rate, one of the most prevalent is the deduction of new equipment costs — which the 2017 Tax Cuts and Jobs Act

significantly expanded. Under current law, companies can immediately deduct the full cost of new equipment until 2023, known as bonus depreciation.

Advocates of immediate expensing claim it boosts incentives for companies to invest, and removes a bias in the tax code for larger, established companies over startups. Critics claim its benefit is minimal, at the cost of moving the tax code further from economic reality and a loss of revenue.

Whatever the merits of the policy, it's one that many of the country's biggest companies have leapt to take advantage of.

In 2019 the Institute on Taxation and Economic Policy, a left-leaning think tank and advocacy organization, published an analysis showing that 61 Fortune 500 companies paid no income tax in 2018, according to their own financial reports.

ITEP noted that heightened expensing or depreciation schedules accounted for much of the disparity, especially with capital-intensive companies. Corporations such as Halliburton Co., Chevron Corp., Owens Corning, JetBlue Airways and Ameren Corp. all used accelerated depreciation to significantly reduce their tax rates.

Amazon.com Inc., a frequent Biden target for low tax payments, said in its 2019 annual report that deductions for stock-based compensation and accelerated depreciations were the primary reason its U.S. taxable income was reduced.

The company also said it had $1.7 billion in federal tax credits to carry forward for future tax liabilities, mostly related to the federal research and experimentation tax credit, another federal incentive for spending.

While Biden has yet to elaborate on many of the details of the plan, in principle an alternative minimum tax based on book income would be likeliest to hit companies taking advantage of these provisions, as well as tax credits for green technologies and other incentives that the candidate himself is proposing.

To defenders of accelerated depreciation, this is the worst of both worlds, reducing the tax benefits to invest at a time when the economy desperately needs activity to recover from the coronavirus pandemic recession. And even skeptics of the benefits of expensing may wonder why the tax code would retain the policy while counteracting it with an additional policy, expanding the contradictions and complexities of the federal tax code.

While Congress could enact carveouts for any of these credits or deductions, those could cut against one of the main arguments in favor of book taxation — that it would avoid the complexities and loopholes that lawmakers have added to the federal tax code.

"The idea is to remove excessive tax benefits without eviscerating the impact of the intended tax incentives," said Mark Mazur, the former assistant secretary for tax policy at the U.S. Treasury Department in the Obama administration and the current director of the Urban-Brookings Tax Policy Center. "Obviously, easier said than done."

One adjustment could be to allow companies to carry forward credits against minimum tax payments, a feature of the alternative minimum corporate tax that the TCJA repealed in 2017.

Richard Harvey, a professor at Villanova University School of Law, noted that Biden has indicated his minimum tax would target large corporations. They are less likely to base investment decisions on short-term cash tax considerations.

"Although they are interested in cash flow impacts, what really gets their blood flowing is the financial statement impact of any tax changes," Harvey said. "Thus, if there is an AMT credit carryforward, most large businesses should not be that upset with a book income tax — except for the fact it will require resources to calculate."

To defenders of the corporate minimum tax, adding contradictions in the tax code would be worth it to ensure that companies pay their fair share in taxes.

Matthew Gardner and Steve Wamhoff, two analysts with ITEP, wrote in a July post that incentives such as bonus depreciation are "nothing more than giveaways to corporations that fail to produce such broader benefits for society."

While they would prefer Congress to nix these tax breaks and make the tax code itself fairer, they said they doubted that lawmakers are currently up for the task.

"In the absence of that type of precise, surgical reform to our tax code, Biden's minimum corporate tax proposal is good enough," they wrote. "Either way, corporations that enjoy large profits would be required to pay taxes to support the many public investments that make those profits possible."

Given the potential for political blowback, many speculate that Biden could end up forgoing book income in the hopes of passing some kind of minimum tax. The policy could resemble the alternative minimum corporate tax that the Tax Cuts and Jobs Act repealed in 2017.

"If this thing ever got traction, and we tried to do this by book income, you would expect a big push to add other items in as offsets," John Gimigliano, a principal at KPMG LLP's national tax practice, said in a podcast last month. "Maybe it ends up looking a lot more like the old AMT, or maybe a hybrid."

Biden's campaign did not return a request for further comment.