Democrats hope that by stressing ambitious temporary tax incentives for workers and families in a stalled House-passed pandemic response package, they might sway Georgia voters in the run-up to two January runoff elections that will decide who controls the Senate. 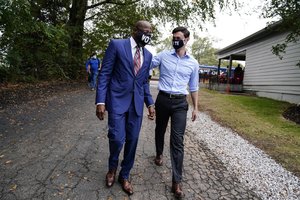 Leaders of both parties remain at odds over the scope of pandemic response legislation and have opted, for now, not to make major concessions to resolve a partisan dispute over whether to include temporary versions of worker and family incentives backed by President-elect Joe Biden and Democratic leaders in legislation to follow up on the Coronavirus Aid, Relief and Economic Security Act

As Biden prepares to take office with a Democratic House majority, both sides have signaled a willingness to wait, if necessary, for more pandemic response talks in the new Congress after the two Jan. 5 runoff elections in Georgia that could settle majority control of the Senate.

Several senior Democrats said their party would take a tough stance in insisting on the importance of temporary tax incentives for workers and their families in the $2.2 trillion pandemic relief package, H.R. 8406, passed by the House, 214-207, on Oct. 1.

The package would broaden just for 2020 the earned income tax credit for workers without qualifying children. It also would include for 2020 a fully refundable $2,000 child tax credit and a more generous formula for the child and dependent care credit, which would allow eligible families to claim 50% — up from the usual 35% — of employment-related child care expenses.

Republicans would control the Senate, and be able to block Democrats' temporary worker and family tax incentives in the new Congress, if they win at least one of the two runoff elections pitting Sens. David Perdue and Kelly Loeffler against their respective Democratic challengers, Jon Ossoff and Raphael Warnock. The GOP has continued to argue for a smaller bundle of measures costing about $500 billion, excluding the Democratic-backed tax incentives for workers and their families.

But if Democrats win both races, they would have at least 50 members, enough to control the Senate, since tie-breaking votes would be cast by Vice President-elect Kamala Harris. Two independents, Sens. Angus King of Maine and Bernie Sanders of Vermont, caucus with the Democrats. Democrats could then potentially advance a big 2021 stimulus package early in the next Congress containing temporary worker and family tax incentives.

With that goal in mind and no sign of agreement on another relief package, Sen. Chris Van Hollen, D-Md., a former chairman of the Democratic Senatorial Campaign Committee, predicted Democratic leaders would continue their strategy during the fall campaign season of stressing the importance of new worker and family tax incentives to try to counter the economic effects of the COVID-19 pandemic rather than accepting the GOP's small plan.

"I do think it will resonate because so many parents need help," Van Hollen told Law360. He and several other Democrats said they believed the emphasis on temporary tax incentives aimed at working families would draw support from Georgia voters and would lay the groundwork for advancing such items next year.

House Speaker Nancy Pelosi, D-Calif., said Friday that she believed Biden had won a mandate for his agenda. She said Democrats would stand their ground if the two sides could not reach an agreement on worker and family tax incentives and would "make it clear to the American people what the choice is."

House Ways and Means Committee Chairman Richard Neal, D-Mass., and Sen. Ron Wyden, D-Ore., ranking member on the Senate Finance Committee, have both backed Pelosi's tough stance in dealing with the Trump administration and GOP leaders, and her push to advance proposals for tax incentives for workers and their families in pandemic response legislation.

On the other side, Sen. Roy Blunt, R-Mo., chairman of the Republican Policy Committee, said he doubted Democrats would get traction with their campaign to promote a bigger pandemic response package with contentious tax incentives for workers and their families.

"The liberal agenda was rejected by voters. There was no mandate in this election," Blunt said. He and other GOP leaders have argued temporary worker and family tax incentives were not needed as the economy recovers from pandemic-related setbacks, and have made the case for tailoring pandemic response legislation to limit its impact on the deficit.

Sen. Rick Scott, R-Fla., incoming chairman of the National Republican Senatorial Committee, and Blunt both said GOP lawmakers would reply to Democrats' emphasis on temporary worker and family tax incentives by emphasizing the importance of blocking Biden's agenda for raising taxes on corporations and wealthy families.

Scott said he believed the GOP's emphasis on lower taxes, preservation of the 2017 Tax Cuts and Jobs Act

and other conservative themes would attract support from Georgia voters.

Loeffler and Perdue were not immediately available to comment on tax priorities for the next Congress, but both have been staunch defenders of the 2017 tax overhaul

For their part, both Ossoff and Warnock have criticized the GOP's strategy for dealing with the pandemic's economic effects and have argued there is a need for Congress to provide more incentives for small business and working families.

Senate Minority Whip Dick Durbin, D-Ill., said Democrats would continue in the coming weeks to emphasize the lack of an agreement on the temporary tax incentives for workers and their families included in the House-passed pandemic relief package.

Durbin said Democrats would make the case that Republicans were focused on a smaller pandemic response package with a plan to shield companies from coronavirus-related liability lawsuits, which he said would place "the needs of Big Business ahead of the needs of small families."

"If they do nothing in the post-election session on COVID relief, that may affect the vote on Jan. 5 in Georgia," Durbin told Law360.