Lawmakers in both parties are making a strong push to advance incentives for child care as they try to reach agreement on a bicameral pandemic response package before a monthlong recess scheduled to start Aug. 10. 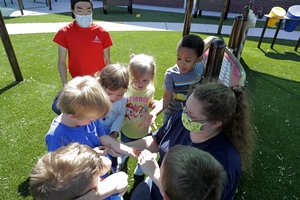 Congressional Republicans and Democrats are pushing various options for expanding access to child care in the next pandemic response package. (AP)

Key players in both parties say expansion of access to child care is needed to help working parents focus on their jobs during the pandemic and should be part of the next legislative package to address the economic effects of the novel coronavirus, which causes the respiratory disease COVID-19. Child care has emerged as a key campaign theme for both sides as they look to woo support from working parents in the November elections.

Democrats are trying to advance a proposal to temporarily make the child and dependent care credit fully refundable, lift the maximum credit rate from 35% to 50% and double the cap on qualified expenses to $6,000 for one child, or $12,000 for two or more children, in 2020. Such a proposal passed the House in May in the Health and Economic Recovery Omnibus Emergency Solutions Act. Some Republicans have countered by promoting aid for providers of child care services and less ambitious proposals to reshape the child and dependent care credit created by the 1976 tax law

Senate Majority Leader Mitch McConnell, R-Ky., said Tuesday that the emerging Senate GOP plan would provide "support for child care needs," which he said would be paired with $105 billion for schools to ensure they can "safely reopen." Republicans also are discussing a potential second round of economic impact payments for some low- and moderate-income families, a payroll tax cut, an expanded employee retention tax credit and a payroll tax credit to help employers provide healthy workplaces and health screening tests to protect workers from the virus.

"Surveys show the American people's top priorities for reopening are child care and K-12 schools," said McConnell, who stopped short of outlining details of his plan to boost child care.

While the GOP has promoted efforts to enable working parents to send their children to school and to care providers, many Republicans have pushed back against the broad expansion of the child and dependent care credit called for in the Heroes Act.

In lieu of backing the Heroes Act's version of an expanded tax credit, Sen. Roy Blunt, R-Mo., chairman of the Republican Policy Committee, said he and other Republicans were exploring other ways to ensure working parents have access to affordable child care. For example, Blunt has been pushing for a new program to provide grants to child care providers and said he was open to other measures aimed at ensuring working parents can afford child care.

"Child care has to work," Blunt told Law360. "It certainly is unlikely to work if your maximum capacity with the new distancing standards is like 45 to 50% of the kids that you would normally have. I think we need to do something there."

House Ways and Means Chairman Richard Neal, R-Mass., has played a lead role in promoting a key proposal in the Heroes Act to lift the maximum tax credit rate from 35% to 50% and restructure the incentive so that the top credit rate would cover families earning up to $120,000 in 2020. The plan would reshape temporarily the sliding-scale framework for credit rates established in 1981

to funnel to low- and moderate-income families a larger share of benefits from the child and dependent care credit, which was permanently expanded by the 2012 fiscal cliff deal

The bill also would increase the maximum exclusion for employer-provided child and dependent care to $10,500 in 2020, up from the $5,000 cap established by the 1986 tax overhaul

Neal and other senior Democrats also are pushing for other relief measures including broader incentives for families with children, but they have made clear they are open to tweaks to the Heroes Act provisions and other ideas for expanding access to child care.

In the Senate, Finance Committee Chairman Chuck Grassley, R-Iowa, has also taken a neutral stance on proposals to expand the child and dependent care tax credit, as Republicans continue to evaluate new tax proposals and potential extensions and tweaks for items contained in the Coronavirus Aid, Relief and Economic Security Act.

He and other GOP senators have expressed interest in new incentives for child care and paid family leave.

One option would be to move toward a less sweeping expansion of the child and dependent child care credit. For example, Rep. Stephanie Murphy, D-Fla, a member of the Ways and Means Committee, has argued for a bipartisan proposal, H.R. 1696, to provide refundability for the child and dependent care credit, increase credit rates and require annual adjustments for inflation of income thresholds for various credit rates. The proposal would also increase a taxpayer's exclusion for employer-provided child care assistance to $7,500 from $5,000. Sen. Angus King, I-Maine, has backed a similar bipartisan measure, S.B. 749, saying he believed it could attract consensus support to deal with "one of the biggest issues that have arisen out of this virus."

Sen. Richard Burr, R-N.C., a member of the Finance Committee and a supporter of King's bill, said the measure was needed to "modernize these tax credits to reflect rising costs and to give working parents the flexibility they need to make the best decisions for their families."

Rep. Jackie Walorski, R-Ind., a Ways and Means Committee member and backer of the Murphy bill, said she believed that the proposal could gain support in bicameral talks on the pandemic response package.

"Child care has to be addressed one way or another," Walorski told Law360. "If parents are going to go back to work, they've got two choices: You've got kids going back to school, and you've got child care."

Murphy, a co-chairwoman of the Blue Dog Coalition, a centrist faction of the Democratic House caucus, has continued working to promote her proposal, and she made the case that her proposal to broaden the child and development tax credit would have a better chance to gain traction than the approach outlined in the Heroes Act.

"Bipartisan proposals that help businesses have the best shot at being in the next COVID proposal," Murphy told Law360.