Illinois Democratic Gov. J.B. Pritzker signaled Friday that he may seek tax increases to help close a looming $3.9 billion budget shortfall that has been exacerbated by the pandemic and the defeat of a graduated income tax amendment at the polls. 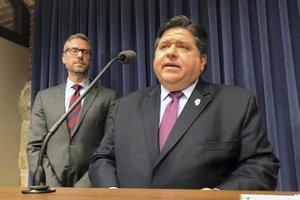 A report from Illinois Gov. J.B. Pritzker's Office of Management and Budget said the state must address a long-term structural deficit in its budget. (AP Photo/John O'Connor)

A report from Pritzker's Office of Management and Budget said Illinois must address a long-term structural deficit in its budget that is estimated to produce a $3.9 billion general fund shortfall for fiscal year 2021, which began July 1. The report said that the state will experience a $4.8 billion shortfall by fiscal year 2022 and a $4.2 billion deficit by fiscal year 2026 under current revenue trends.

Illinois has long faced budget woes, but the onset of the COVID-19 pandemic has further aggravated the state's revenue projections, the report said. Coupled with voters rejecting a constitutional amendment that sought to do away with the state's flat income tax and enact underlying legislation that would have imposed a graduated personal income tax and raised the corporate tax rate, Pritzker said spending cuts alone can't balance the budget going forward.

"The governor will work with the legislature to identify corporate and business tax loopholes that can be closed and tax adjustments that can be made that will minimize the impact to lower and middle-class families while ensuring that Illinois can meet its financial responsibilities," the report said.

Although the report added that Pritzker will continue to seek federal aid for the pandemic and that he asked state agency directors to cut their fiscal year 2022 spending by 10% from fiscal year 2021, it didn't mention any specifics about which tax policy changes that Pritzker would support.

Jordan Abudayyeh, a spokesperson for Pritzker, told Law360 that the governor has already initiated conversations with the leadership in the Democratic-heavy General Assembly and has said "all options are on the table."

Pritzker signed a budget for fiscal year 2021 into law, but it banked on more federal aid than the state received and would have benefited from an additional $1.2 billion if voters approved the graduated income tax amendment, which the governor championed, according to the report.

Absent any more federal aid, the report said Illinois may also have to turn to short-term borrowing to balance the budget, although it noted that would put "additional pressure" on future budgets because the funds must be repaid within three years.

The projected budget gap for fiscal year 2021, however, did close by about $900 million from initial projections, in part due to higher income and sales tax collections than were expected for the first four fiscal months of the year, according to the report.

But the governor said that lawmakers must think long-term when weighing any revenue increases because a balanced fiscal year 2021 spending plan wouldn't cure "the underlying structural deficit of the state's budget."

When reached for comment, a representative for House Republican Leader Jim Durkin, R-Western Springs, shared a letter that Durkin sent to the governor on Tuesday that said Pritzker should "make unilateral cuts" as he sees fit to balance the fiscal year 2021 budget rather than raise taxes or borrow funds.

"Passing a budget based on hypothetical revenue and false promises from a now-failed tax increase was unconstitutional and totally disingenuous to the citizens of our state who depend on government services," Durkin's letter said.

It's unknown when lawmakers may meet again to take up any potential tax-related or budget legislation. On Tuesday, the General Assembly postponed its scheduled veto session, which was slated for Nov. 17-19 and Dec. 1-3, amid a resurgence in cases of COVID-19, the respiratory illness caused by the novel coronavirus.

Next year's session will start Jan. 13, 2021, although House Speaker Michael Madigan, D-Chicago, said in a statement on Tuesday that lawmakers "do intend to schedule additional session days so we can finish our important work."

A representative for Senate President Don Harmon, D-Oak Park, was unable to immediately comment on the report.