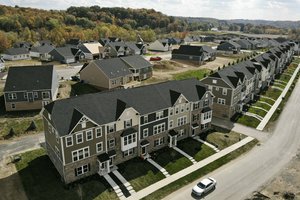 Proponents say President-elect Joe Biden's proposed tax credit for first-time homebuyers would help workers invest in a new home and increase their net worth over time, while aiding the recovery from the economic effects of the coronavirus pandemic. (AP Photo/Ted Shaffrey)

Proponents say the proposal would help workers to invest in a new home and increase their net worth over time while dealing with fallout from the novel coronavirus, which causes a respiratory disease, COVID-19. Biden's plan includes a proposal for a permanent refundable and advanceable tax credit designed to help cover the down payment for a first-time home purchase, with the credit capped at $15,000.

Both sides are looking for areas of potential bipartisan compromise in a closely divided Congress, where Biden's ambitious tax plan will face hurdles as lawmakers weigh a number of potential vehicles for tax legislation in 2021.

Sen. Tom Carper, D-Del., a staunch ally of Biden and a senior member of the Senate Finance Committee, said he would look for ways to advance the proposal as part of a package aimed at spurring an economic recovery. He said the proposal probably would not be advanced in a pandemic relief package at the start of the new Congress, but it would be a top priority later in 2021, probably as part of a longer-range stimulus package.

Both sides remain at odds on legislation to follow up on the Coronavirus Aid, Relief and Economic Security Act

, enacted last March, as they wait for a pair of Jan. 5 runoff elections in Georgia to decide who controls the Senate in the next Congress.

"Once we've dealt with the worst of this pandemic, I think that's a good second place to go. It could well draw bipartisan support," Carper told Law360. He referred to the development of a 2021 stimulus measure, which could carry the proposed first-time homebuyers credit and be moved after an initial pandemic relief package.

Although the Biden plan contained few details, a study by the Urban-Brookings Tax Policy Center projected that the credit would cost about $25 billion annually, based on certain conditions.

A spokesman for the Biden transition team was not immediately available to comment on plans for the proposed first-time homebuyer tax credit.

For their part, several senior Republicans said they believed Biden's proposal could get some traction with GOP lawmakers as part of a broader economic stimulus package.

Sen. Mike Crapo, R-Idaho, a senior member of the Finance Committee, said he believed a credit for first-time homebuyers would be a potential area for finding common ground in the new Congress. "It's certainly the kind of thing that I would be open to considering," he told Law360.

In the new Congress, Crapo will be in line to become the top Republican on the Finance Committee, replacing Sen. Chuck Grassley, R-Iowa, who faces a term limit under Republican Conference rules.

Crapo noted that lawmakers in both parties had supported similar incentives in the past. For example, Congress enacted a temporary first-time homebuyer tax credit capped at $7,500, which was designed to cover 10% of the cost of a home purchase, in a 2008 law

under President George W. Bush. Congress approved an extension with an $8,000 cap in the American Recovery and Reinvestment Act

in February 2009, then an extension

in November 2009 and another continuation

in July 2010 under President Barack Obama.

As both parties explore stimulus measures aimed at countering the pandemic's economic effects, industry advocates have made the case that the new incentive could be part of a broader plan aimed at ensuring working families have more access to affordable housing.

Lawrence Yun, chief economist for the National Association of Realtors, said the proposed new credit could help some novice homebuyers deal with upticks in home prices and other challenges in a competitive marketplace, even though the trend of rising home prices could continue without an increase in housing supply.

A recent study by the Consumer Financial Protection Bureau found consumers seeking to make their first home purchase faced different hurdles than they did during the Great Recession of 2007-2009, including a housing market with limited inventory, somewhat higher prices and tougher competition because buyers have higher credit scores.

"The housing market currently is booming. Prices are rising much faster than people's incomes. Therefore providing some assistance to purchase homes will alleviate some of the challenges faced by first-time homebuyers," Yun told Law360. He said the boom was fueled in part by consumers looking for larger houses as they continue to work at home during the pandemic.

For the housing industry, Biden's proposal represents a way not only to help first-time homebuyers, but also to help make up for a potential decline in the overall impact of the traditional mortgage interest deduction.

did not trigger the downturn in the housing market envisioned by some analysts three years ago. He said low interest rates helped boost home sales, even though some homeowners now claim the standard deduction rather than itemized deductions, including the deduction for mortgage interest.

Still, Jim Tobin, executive vice president and chief lobbyist for the National Association of Home Builders, said he was concerned the mortgage interest deduction "has really been neutered because of the increased standard deduction in the 2017 tax law" and urged lawmakers to look at new ways to promote homeownership.

"We'd like to see a permanent mortgage interest credit, which has the potential to really help first-time buyers," Tobin told Law360.

C. Eugene Steuerle, a scholar at the Urban-Brookings Tax Policy Center and former deputy assistant Treasury secretary, said he believed supporters could make the case that in addition to promoting homeownership, Biden's proposal would be an effective way to reduce the wealth gap between most workers and higher-income earners.

"This proposal would help to narrow the gap. And it would help the young, Blacks and Hispanic Americans — all of whom have dramatically lower average wealth — to form households and build up wealth," Steuerle told Law360.

Several senior lawmakers in both parties said that Biden's proposed new tax credit could move in a stimulus package with other measures aimed at promoting affordable housing for working families. In addition to the incentive for some homebuyers, Biden has proposed a tax credit for renters and has called for new measures to increase affordable housing for low-income families.

Sen. Todd Young, R-Ind., chairman of the National Republican Senatorial Committee and a Finance Committee member, said he wanted to take a close look at Biden's proposal for a first-time homebuyer tax credit, and also would be looking for other ways to promote access to affordable housing for working families during the pandemic.

"Housing affordability is one of my signature issues," Young told Law360.