A Florida bill that would require remote sellers to collect and remit sales and use tax and expand the definition of retail sales to include marketplace facilitators unanimously passed a second state Senate committee Thursday. 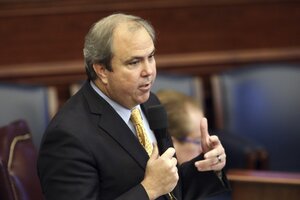 Florida state Sen. Joe Gruters is the sponsor of a bill that would require remote sellers to collect and remit sales and use tax. The bill passed a second Florida Senate committee Thursday. (AP Photo/Steve Cannon)

S.B. 50 passed the Florida Senate Finance and Tax Committee by an 8-0 vote, after previously passing the Senate Commerce and Tourism Committee by an 11-0 vote. The bill would require remote sellers and marketplace facilitators such as Amazon.com to collect and remit tax if they have more than $100,000 in sales into the state during the 2020 calendar year.

The bill will next go to the Senate Appropriations Committee, according to its sponsor, Sen. Joe Gruters, R-Sarasota.

The bill was substituted in committee for a version that would specify that upon registering with the state Department of Revenue, a taxpayer subject to the tax would be relieved of liability for taxes due on remote sales that occurred before the bill's effective date of July 1, 2021. This would include taxpayers that had a physical presence in Florida before July 1. According to Gruters, the provision would provide tax relief to Florida customers, out-of-state dealers and marketplace facilitators.

The substitute bill would also clarify that marketplace facilitators must collect taxes on sales made on behalf of marketplace sellers, regardless of the amount of sales proceeds transferred to the seller, Gruters said in the session Thursday. The substitute bill would also allow marketplace facilitators and large sellers, defined as sellers with annual U.S. gross sales of more than $1 billion, to agree to have sellers collect the tax.

The measure was supported at the hearing Thursday by several organizations, including Amazon, the Florida Association of Counties and the global trade association International Council of Shopping Centers.

Gruters said Thursday that the bill would generate almost $1.3 billion in state and local revenue, noting that while the bill is not revenue-neutral, it was not imposing a new tax.

"This is not a tax increase, this is just changing the point of collection on the tax that's currently owed," Gruters said.

Gruters said as part of getting the bill to be revenue-neutral, he was looking at adding a provision that would provide for a reduction in the state's 5.7% sales tax rate on commercial real estate rentals. A previous proposal in 2019, also by Gruters, included the commercial rent tax cut.

Ida Eskamani, of the economic justice group Florida Rising, told the committee that the group currently does not have a position on the bill. However, she urged the committee not to rely on consumers to address revenue deficits.

Sen. Lori Berman, D-Delray Beach, said during the session that she was concerned about making the bill revenue-neutral when the state was considering cuts to social programs due to reduced revenue.

"We are in a crisis right now," Berman said. "I'd like to make sure that the vast majority of this increase, the increases that will be collected under the tax that's already in existence, will go to social services."

Florida and Missouri are the only states with a sales tax that haven't begun requiring remote sellers to collect and remit taxes after the U.S. Supreme Court's 2018 Wayfair decision, which did away with the physical presence standard for sales and use taxes. Florida is also one of three states that lack a tax requirement for marketplaces. Two nearby states, South Carolina and Alabama, have thresholds of $100,000 and $250,000, respectively, without a transaction threshold.

Gruters and party leadership in both state chambers did not respond to requests for comment.