A push by Democrats to reverse corporate tax cuts to partly finance the House-passed pandemic response package could become a blueprint for paying for future Democratic priorities, including permanent tax cuts for families. 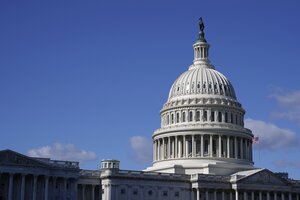 One provision in the pandemic response package passed by the House over the weekend would pay for a $22.8 billion pension aid plan by repealing a tax break for multinationals. (AP Photo/Patrick Semansky)

Several senior Democrats said there was ample support in their party for some tax hikes on big corporations to finance Democratic initiatives in the coming months. They said the fate of two pending proposals for corporate tax hikes in the pandemic response legislation could foreshadow future efforts to uproot or scale back corporate incentives in the 2017 Tax Cuts and Jobs Act

One proposal in H.R. 1319, President Joe Biden's $1.9 trillion American Rescue Plan that was passed by the House on Saturday, would repeal a tax break for multinationals to pay for a $22.8 billion pension aid plan included in the bill. Another recent Senate proposal whose fate is less clear would replace the bill's proposal for a $15 hourly minimum wage with a voluntary wage floor to be enforced with tax breaks for compliance by small businesses and penalties for noncompliance by big corporations.

The novel coronavirus pandemic bill would repeal a provision of the 2017 law set to take effect in 2021, under which multinationals can make a one-time election to allocate interest expenses globally. House Ways and Means Committee Chairman Richard Neal, D-Mass., said the provision was included in the legislation to pay for the aid package for multiemployer and single employer pensions. The tax hike would raise enough revenue — more than $22 billion over 10 years — to ensure the pension bailout complies with Senate rules that govern the budget reconciliation process under which the bill is advancing.

Neal said his party could revisit the strategy of raising taxes only to pay for items with projected costs beyond the allowable 10-year window for budget reconciliation measures as it prepares to move parts of Biden's emerging infrastructure recovery plan. That plan could move under a potential fiscal 2022 reconciliation bill shielded from Senate filibusters.

While temporary tax incentives for families and other items in the relief package do not require offsets, Neal made clear that more business tax hikes could be on the table for items with long-range costs, such as permanent tax cuts for working families, if they are part of Biden's recovery plan.

Both Neal and House Budget Committee Chairman John Yarmuth, D-Ky., said several revenue-raising options were being discussed but there appeared to be no push, for now, toward enacting Biden's 2020 campaign proposal to raise the corporate rate to 28% from 21%.

"No one has approached me on that," Neal said, referring to a potential corporate rate hike.

While Democrats remain split on the scope of any corporate rate increase, Yarmuth and Neal said there was strong support for repeal of the tax incentive for multinationals in the reconciliation bill. And Yarmuth said Democrats likely would focus on tax hikes aimed at multinationals if offsets were needed for potential permanent extensions of several temporarily expanded individual tax incentives in the reconciliation bill: the child tax credit, the child and dependent care credit, and the earned income tax credit for workers without children.

"I would suspect that," Yarmuth told Law360.

While Democrats explore potential new levies on big corporations, Republicans argued such measures would put a damper on job creation.

Rep. Kevin Brady, R-Texas, ranking member on Ways and Means, said the repeal of the one-time election for worldwide allocation of interest expense could undercut efforts to promote an economic recovery.

"It's a complex issue. It does impact our ability to remain competitive and to make sure businesses are investing in the U.S. rather than overseas," Brady told Law360.

Proponents of the provision under Section 864(f)

of the tax code have said it would ensure more accurate calculation of the foreign tax credit limitation, even though it could complicate tax compliance. The provision allows a multinational to allocate interest expenses among its affiliates as if they were part of a single corporation.

Despite such arguments, several Democrats said they believed the proposal to prevent its implementation, which has been delayed since it was authorized in the 2004 American Jobs Creation Act

, had strong support in their party.

Sen. Sheldon Whitehouse, D-R.I., a member of the Senate Finance Committee, said he hoped the proposed elimination of the incentive would lead to more tax hikes aimed at big corporations with overseas operations.

"The shell-and-pea game of hiding your income in different places is uniquely available to multinational corporations. And it's a phony pastime," Whitehouse told Law360.

But a proposal by Finance Chairman Ron Wyden, D-Ore., to create a tax framework to encourage business compliance with a voluntary wage floor faced potential hurdles as some Democrats questioned whether it would be a viable substitute for a higher minimum wage.

Elizabeth MacDonough, the Senate parliamentarian, has ruled the proposed $15 minimum wage would be vulnerable to a Republican-backed Byrd rule point of order for not having a significant effect on the budget. Such objections can only be waived by a 60-vote Senate majority, which means that the provision could be stripped from the bill before a Senate floor vote.

In lieu of raising the current $7.25 minimum wage, Wyden's proposal would impose a 5% tax penalty on payrolls of big corporations that fail to meet a new wage floor. Revenue from that tax would finance a small-business tax credit equal to 25% of wages, capped at $10,000 per year per employer, for those paying higher wages. But several Democrats said it was doubtful that Wyden's proposal would gain support from some progressives, who are looking for other ways to advance a $15 minimum wage.

On the other side, Sen. Rob Portman, R-Ohio, a senior member of the Finance Committee, said he hoped to work with other lawmakers on a potential bipartisan plan to combine a smaller increase in the minimum wage with small-business tax incentives. But Portman said he and other Republicans would push back against proposals to raise business taxes.

He voiced concern that the proposed repeal of the worldwide interest expense allocation would weaken the framework of business incentives in the TCJA to promote domestic investment.

"You want to create an incentive to invest here. And the lower rate and depreciation are key to that," Portman told Law360.

While GOP lawmakers criticized the proposed corporate tax increase in the reconciliation bill, Rep. Dan Kildee, D-Mich., a Ways and Means member and chief deputy whip, said Democrats would make the case to voters that some higher levies on big corporations are necessary.

"Given the magnitude of what we're about to do, it's not too difficult to defend," Kildee told Law360.

Sen. Rick Scott, R-Fla., chairman of the National Republican Senatorial Committee, said he and other Republicans planned to attack such measures as harmful to the economy in the run-up to 2022 midterm elections.