A drive by congressional Democrats to secure one of their longtime priorities, repealing the tax break on carried interest, has made headway on Capitol Hill as lawmakers develop legislation to advance parts of President Joe Biden's recovery plan. 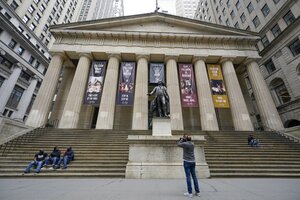 Federal Hall in New York's Financial District. Democrats and some Republicans have been critical of the preferential tax treatment of carried interest, the share of profits paid to general partners of investment funds in return for management services. (AP Photo/Mary Altaffer)

Key Democrats said the administration and party leaders were trying to work out details of a plan to require partners of various types of investment funds to pay ordinary income tax rates rather than long-term capital gains rates on profits from their investment services stakes, or carried interests, in such funds.

They said a proposal to end the carried interest incentive could move in a tax package to finance Democratic priorities in tandem with a separate Biden proposal. That proposal would tax capital gains of taxpayers earning at least $1 million at a top individual rate of 39.6% instead of the current top capital gains rate of 20%.

Democratic proponents said ending the carried interest tax break for managers of private equity funds, venture capital funds and hedge funds was a key part of their party's plan to raise taxes on wealthy investors to help finance Biden's recovery plan, which includes an infrastructure plan and family incentives. They have argued the carried interest of the general partner of an investment fund should be taxed at individual rates, not reduced capital gains rates, similar to the tax treatment for other types of compensation, including bonuses and most stock options.

In the House, Rep. Bill Pascrell, D-N.J., a senior member of the Ways and Means Committee, said he would push for the inclusion of his proposed Carried Interest Fairness Act, H.R. 1068, in legislation to advance Biden's recovery plan. The bill would require earnings from an investment services partnership interest to be treated as ordinary income, subject to individual rates and the self-employment tax, and would codify an exception for gains based on a partner's qualified capital investment.

when there is a failure to pay ordinary income tax rates on carried interest.

"It's a question of who gets the breaks and who doesn't get the breaks," Pascrell told Law360.

Pascrell has argued the carried interest tax incentive is not needed by general partners of investment funds but also has said he would be open to tweaking his plan to reshape part of the partnership tax framework established in the 1954 Internal Revenue Act.

House Ways and Means Committee Chairman Richard Neal, D-Mass., said he planned to examine the carried interest tax break as part of an overall review of proposed changes in individual tax rates. That includes Biden's plan to raise the top individual rate to 39.6% and to tax the capital gains of those earning at least $1 million as ordinary income.

"I assume carried interest is going to be front and center at some point," Neal told Law360.

Such legislation is expected to be discussed as part of a reconciliation bill or other legislation to advance family incentives, including an extension of the temporary expanded child tax credit enacted in the American Rescue Plan Act

, and not as part of an emerging tax package for a regular-order five-year surface transportation reauthorization.

Some business advocates have defended preferential rates for carried interest, arguing that general partners of investment funds deserve to be taxed at reduced capital gains rates on the applicable partnership interests they receive in return for management services. Typically, general partners of funds earn a 2% fee and a 20% share of profits, while limited partners receive 80% of profits.

"As workers and local economies continue to struggle during this pandemic, Washington should not punish long-term investment that creates jobs, builds businesses in communities and develops more renewable energy across America," Drew Maloney, president and CEO of the American Investment Council, said in a written statement. The group represents private equity and growth capital firms.

In the Senate, Sen. Elizabeth Warren, D-Mass., a member of the Finance Committee, said a plan to end the carried interest tax incentive was part of a two-pronged campaign to increase levies on wealthy taxpayers in order to finance incentives for working families and other priorities.

"There are two ways to go forward. One is to try to stitch up the current code, which I'm all in favor of. And that's what changing carried interest is all about. The other is by imposing across-the-board wealth taxes," Warren told Law360.

In addition to pushing to end the carried interest tax incentive, she has used her new seat on the tax-writing panel to promote a plan, S. 510, to levy an annual wealth tax on families and trusts with a net worth of at least $50 million.

While Democrats have been divided on a wealth tax and Biden's proposal for a 28% corporate rate, Sen. Tammy Baldwin, D-Wis., said she believed there would be solid support among centrists and liberals in the Democratic caucus for ending the carried interest tax incentive. Her proposal to end the incentive, S. 1598, is similar to Pascrell's bill and has 13 co-sponsors, including a key centrist, Sen. Joe Manchin, D-W.Va., and three members of the Finance Committee: Warren and Sens. Sherrod Brown, D-Ohio, and Sheldon Whitehouse, D-R.I.

Baldwin predicted there would be broad Democratic support for her bill in part because even some Republicans, including President Donald Trump, have been critical of the carried interest tax break in recent years.

After vowing to end the carried interest tax incentive during the 2016 presidential campaign, Trump backed a provision in the 2017 Tax Cuts and Jobs Act.

Some supporters said legislation could help to clear up questions about the treatment of certain types of carried interest after the Internal Revenue Service's completion of regulations in January to implement changes in the 2017 law.

On the other side, Republicans argued that taxing carried interest at ordinary individual rates would hurt investment firms and reduce prospects for the formation of new investment funds.

Rep. Kevin Brady, R-Texas, ranking member on the Ways and Means Committee, said Republicans had said the mandatory three-year holding period for carried interest to qualify for the long-term capital gains rates represented "the right middle ground" as part of the 2017 tax law. It had "reinforced that these are long term investments that have a very positive impact on the economy," according to Brady.

Brady said he was concerned that elimination of the incentive would reduce the ability of investment funds to attract investors and to supply capital aimed at helping businesses to expand and to counter effects of the coronavirus pandemic.

Sen. Bill Cassidy, R-La., a member of the Finance Committee, said Republicans would try to defend the carried interest tax incentive as a key factor in the success of private equity funds and other types of investment funds.

"It basically allows for the effective deployment of capital," Cassidy told Law360.

According to a Baldwin news release, the congressional Joint Committee on Taxation projected a plan to end the carried interest tax incentive would raise $15 billion over 10 years as a stand-alone measure. But the Tax Foundation, a conservative think tank, projected a similar plan would raise less revenue — about $7.4 billion over 10 years — if enacted as part of Biden's American Families Plan, since it would apply mainly to investment fund partners who earn less than $1 million.

That's because the group's analysis concluded investment fund partners with higher incomes would be covered by Biden's separate proposal to tax all capital gains, including carried interests, of all taxpayers earning at least $1 million at a top individual rate of 39.6%.

Sen. Ben Cardin, D-Md., a senior member of the Finance Committee, said Democrats could move a plan to end the carried interest incentive for general partners of investment funds, with or without final action on Biden's plan to raise capital gains taxes for wealthy investors. But Cardin said lawmakers would need to address concerns about the proposal's impact on some investment fund managers, who rely on carried interest stakes for their livelihood in lieu of wages and fees.

"The problem has always been in drafting legislation on carried interest," Cardin told Law360. For example, he said there could be disputes over potential exceptions to allow reduced capital gains tax rates to apply to certain types of carried interest.

"You've got to determine who is really taking advantage of a tax provision, as opposed to those who are just investors," Cardin said.