Close
Join Law360 Tax Authority and a panel of industry experts to discuss hot topics in state and local tax on June 1, 2022 at 1:00 PM EST.
Register Here
This article has been saved to your Favorites!

An Ohio man on Wednesday appealed a judge's dismissal of his constitutional challenge to a state law allowing cities to tax remote workers in other municipalities during the pandemic, the latest development in a string of cases over the statute. 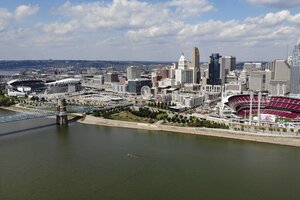 Josh Schaad, a resident of a Cincinnati suburb, Wednesday appealed a judge's dismissal of his constitutional challenge to an Ohio law allowing cities such as Cincinnati, to tax remote workers in other municipalities during the coronavirus pandemic. (AP Photo/John Minchillo)

The Hamilton County Court of Common Pleas on Tuesday tossed a case from Josh Schaad, a Blue Ash resident who asked the court to compel Cincinnati to issue him a refund of income taxes withheld in 2020 for days when he worked from home. Schaad's counsel, Robert Alt, president of the Buckeye Institute, a free-market research organization, announced Wednesday that a notice of appeal to the state' First District Court of Appeals had been filed.

"For more than 70 years, the Ohio Supreme Court has recognized that the constitution prohibits local governments from taxing the income of individuals who neither live nor perform work in the taxing city," Alt said in a statement. "And, yes, the constitution applies even during a pandemic."

enacted under a provision in H.B. 197 last year that deems remote work performed during the coronavirus pandemic to occur at an employee's principal place of work until 30 days after Ohio lifts its pandemic-related state of emergency.

Several individuals such as Schaad have filed challenges to the law around the state, saying that the cities where their employer's offices are located have no authority to impose income taxes on them for days in which they worked from home. But Judge Christopher Wagner granted a motion from Karen Alder, Cincinnati's finance director, to dismiss Schaad's case, saying Ohio's General Assembly can establish local tax allocation rules and that Schaad's due process rights weren't violated.

Judge Wagner held that the "plain reading" of H.B. 197 establishes that Schaad "was working in Cincinnati even if he was physically working in the city of Blue Ash."

The court found that Schaad's income satisfied the due process clause's two-part test, saying that there was a sufficient connection between Schaad and Cincinnati and that the taxes arise from work that he performed in the city.

"This court finds there is a sufficient nexus that did not violate the due process clause as established by the Ohio legislature," Judge Wagner said.

Franklin County Court of Common Pleas Judge Carl Aveni issued a similar ruling in April, dismissing a challenge against the law that sought to force the city of Columbus to issue refunds for taxes withheld from noncity residents. The Buckeye Institute, which represents the individuals in that case as well as the other challenges against the law, has appealed that ruling as well.

Like Judge Aveni's ruling in favor of Columbus, Judge Wagner's order said that Schaad misapplied holdings from the state Supreme Court's 2015 decision in Hillenmeyer v. Cleveland Board of Review

and the 2020 decision in Willacy v. Cleveland Board of Income Tax Review

to support its position.

Both cases involved interstate taxation, with Hillenmeyer invalidating Cleveland's method of taxing the income of nonresident athletes and Willacy finding that Cleveland could tax a retired city employee's stock options when she exercised them after moving to Florida.

Judge Wagner said that those cases were distinct from Schaad's complaint, which argued that they bolstered his due process arguments, but that applying their two-part due process test established that he owed tax to the city.

"This court recognizes the challenge of citing to cases that concern an untested law," Judge Aveni said. "But the twofold due process is the same in these cases."

The controversy over the temporary income tax rule change has grabbed the attention of state lawmakers, who have folded it into the state's budget negotiations. The Ohio Senate passed a version of the budget bill, H.B. 110, on June 9 that would reverse the cities' abilities to impose income taxes on remote workers by specifying the sourcing change was intended to offer withholding relief but not determine an employee's location for municipal income tax liability.

Lawmakers are currently hashing out their differences over the budget in a conference committee and must reach an agreement by June 30, the end of the state's fiscal year. In addition to the budget, a separate bill that the state House of Representatives passed in May, H.B. 157, would allow remote workers to claim refunds for tax year 2021 but not 2020.

The House Ways and Mean Committee elected to stop H.B. 157 from taking effect retroactively after local government representatives cautioned that allowing retroactive refunds for a closed tax year could cripple municipal budgets. That bill is awaiting action before the Senate Ways and Means Committee.

Schaad is represented by Jay Carson and Robert Alt of the Buckeye Institute.

Alder is represented by Diane Menashe and Daniel Anderson of Ice Miller LLP.

The case is Josh Schaad v. Karen Alder, case number A2100517, in the Hamilton County Court of Common Pleas.