The Ohio Senate passed a biennial budget bill Wednesday that seeks to trim individual income tax rates by 5% and reverse a law that allowed cities to impose income taxes on remote workers in other municipalities during the coronavirus pandemic. 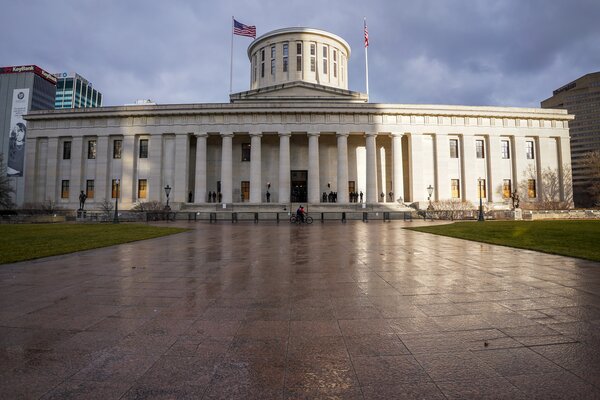 The Republican-controlled Ohio Senate passed its biennial budget bill by a 25-8 vote Wednesday. The bill would phase in 5% across-the-board income tax cuts by 2022 and undo a 2020 law that temporarily allows cities to tax employees working in other municipalities. (Photo by Jason Whitman/NurPhoto via Getty Images)

The Republican-controlled upper chamber passed H.B. 110, the $75 billion budget for fiscal years 2022 and 2023, by a 25-8 vote, sending it to the state House of Representatives for consideration of the Senate's changes to the measure. The bill would phase in 5% across-the-board income tax cuts by 2022 and undo a 2020 law that temporarily allows cities to tax employees working in other municipalities.

Sen. Kristina Roegner, R-Hudson, said the bill would provide a clarification to the change to the local income tax rule that was enacted through H.B. 197 last year and will be in effect until 30 days after Ohio lifts its pandemic-related state of emergency. That law has been at the center of a series of legal challenges from telecommuters who claim cities are unconstitutionally taxing them.

Roegner said last year's bill was meant to freeze income tax withholding as a means of administrative ease but shouldn't have allowed cities to tax workers outside their borders.

"If you don't work in a city [and] if you don't live in a city, you shouldn't have to pay tax in that city," she said on the Senate floor.

Democrats decried that provision of the budget, saying it would cause cash-flow issues for municipalities by changing the tax rules that they operated under in 2020 and allow employees who worked remotely to claim refunds from the cities their offices were located.

"Making such a significant retroactive change to our tax policy for a tax year that ended almost six months ago will have a … detrimental impact on our municipalities," Sen. Hearcel Craig, D-Columbus, said on the Senate floor.

The chamber tabled an amendment from Craig that would have stopped the reversal from taxing effect retroactively, but Matt Dolan, R-Chagrin Falls, chairman of the Senate Finance Committee, said the issue warrants future debate.

Dolan said on the Senate floor that the bill's proposed tax cuts would boost Ohio's economy by providing residents with more money to spend, brushing aside arguments from Democrats that the tax cuts would disproportionately benefit high-earners. He said the bill's tax cuts should be viewed as "as a small part of a movie" because they build on other tax reductions Ohio enacted in previous budgets that lowered tax burdens on all residents.

But Sen. Vernon Sykes, D-Akron, the ranking member on the Senate Finance Committee, said in a statement shared with Law360 that the budget "fails to invest in a strong recovery" for the state.

"Instead, the majority is again prioritizing income tax cuts for the wealthiest Ohioans and depriving our state of resources that should be used to reform our unconstitutional school funding system, expand high-quality child care, and improve our health care and criminal justice systems," Sykes said.

The budget is projected to cut $875 million in income taxes over the two-year period. John Fortney, a spokesman for the Ohio Senate majority caucus, told Law360 that the tax cuts wouldn't trigger a provision in the American Rescue Plan Act

"Ohio's two-year budget must be balanced as required by the constitution," Fortney said. "It is built on state tax dollars, not federal funding, so any federal clawback would not apply."

Ohio's Republican Attorney General Dave Yost is among a number of attorneys general who have sought to strike down the clawback provision, claiming it is unconstitutional.

The bill would also exclude employment agency services from state sales tax and expand several tax incentive programs, including doubling the amount of Ohio opportunity zone tax credits an individual can receive in a biennium from $1 million to $2 million. That program offers $50 million in total biennial credits to investors in economically distressed areas designated in federal law, stemming from a capital gains tax break in the federal Tax Cuts and Jobs Act

Additionally, the budget would eliminate the state's Tax Expenditure Review Committee, which was created under a 2016 law

The Senate plan is a significant deviation from the budget the Republican-controlled House of Representatives passed in April. That proposal would reduce all nonbusiness income tax rates by 2% and establish income tax deductions for gains on investments in Ohio-based venture capital firms and on venture capital firm investments in state businesses.

Fortney said that the budget will go to a conference committee, where representatives from each legislative chamber will negotiate the bill's final language before sending it to Republican Gov. Mike DeWine. Ohio's new fiscal year begins July 1.

Dan Tierney, DeWine's press secretary, told Law360 that the governor will continue to review the budget bill as it evolves.

Representatives of the Republican leadership in the House did not immediately respond to a request for comment.