Senate Democrats face tough choices as they attempt to shoehorn President Joe Biden's recovery plan priorities into a filibuster-proof reconciliation bill that is likely to include a number of tax increases championed by the administration and Democratic leadership. 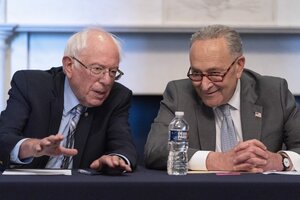 Senate Majority Leader Chuck Schumer, D-N.Y., and Budget Chairman Bernie Sanders, I-Vt., offered an opening bid of sorts this week by unveiling the outline of a $3.5 trillion reconciliation bill in an emerging fiscal 2022 budget resolution headed to the floor this month. But it remains unclear whether the package will pass muster with moderates in the 50-50 Senate, including Sen. Joe Manchin, D-W.Va., a key swing vote, who has pushed for a bill no larger than $2 trillion, which roughly matches the newly enacted $1.9 trillion American Rescue Plan Act.

Intraparty talks on the size and scope of incentives and tax hikes will be crucial to creating a pathway to move the reconciliation bill in September. Such talks will take place on a separate track, for now, from efforts by lawmakers in both parties to try to salvage Biden's tentative infrastructure deal with a bipartisan group of senators in a regular-order five-year surface transportation funding bill.

Sen. Chris Coons, D-Del., a Biden ally, said Democrats were trying to close a gap between the tax priorities of Manchin and other moderates and the more ambitious goals of the party's liberal wing. For example, Manchin has called for a new corporate rate of 25%, short of Biden's liberal-backed 28% target rate.

Manchin said that he planned to study the new budget plan and that he was concerned about the reconciliation bill's potential impact on inflation and the federal debt of more than $28 trillion. "We're going to have to wait and see everything," Manchin told reporters.

Whatever happens, Coons said he hoped the reconciliation bill would include the core of Biden's American Families Plan, including extensions of three temporary family incentives. "What matters to me is how much of President Biden's agenda we can get accomplished," Coons told Law360.

According to the Tax Foundation, a conservative think tank, Biden's plan for all three incentives would cost $653.9 billion over 10 years, including a $417.5 billion plan to permanently extend full refundability of the child tax credit and to extend through 2025 increased credit amounts of $3,600 for children under 6 and $3,000 for children under 18. The group found Biden's proposal to expand the child and dependent care credit would cost $96.7 billion over 10 years, and a permanent expanded earned income tax credit for workers without qualifying children would cost $139.7 billion.

Schumer said on the floor Wednesday that the new budget framework was the result of chats with Democrats on Sanders' panel. He said the Budget Committee could "begin the important work of producing a budget resolution for the Senate."

"The wealthy and large corporations are going to start paying their fair share of taxes so that we can protect the working families of this country," Sanders said in a news conference with Schumer on Tuesday night.

While many Democrats support Biden's proposed extensions of family incentives, Sen. Robert Menendez, D-N.J., a senior member of the Finance Committee, would need to settle disputes over whether to go beyond Biden's tax agenda.

For example, some liberals have pushed for a plan to make permanent the temporary increase in the value of the child tax credit, which is set to revert to $2,000 at the end of the year.

And Menendez has promoted full repeal of the $10,000 cap on state and local tax deductions, which expires at the end of 2025, while other lawmakers have pitched the idea of raising or shortening the cap.

"You can't start talking about pay-fors if you don't know what you're paying for," Menendez told Law360.

As senators try to settle on a tax package, the reconciliation bill could face more hurdles down the road. The measure's parameters could change if the bipartisan infrastructure deal unravels and Democrats opt to try to move items in accord, including $40 billion in mandatory funding over 10 years for the Internal Revenue Service, in the reconciliation bill rather than the highway bill.

House Ways and Means Chair Richard Neal, D-Mass., has said House Democrats will look to advance some of their own tax priorities, but he also made clear that they would look to avoid floor showdowns on items with little or no chance of passing the Senate.

"I will not ask members to vote on something that's not happening," Neal told reporters in late June.

Rep. David Price, D-N.C., a senior appropriator and former professor of public policy at Duke University, said the Senate was viewed as a "critical chokepoint" for delivering parts of Biden's recovery plan. But he said House Democrats could wait to try to extract concessions in later rounds of negotiations on the budget resolution and the reconciliation bill.

"Whatever we do has got to make it through the Senate," Price told Law360.

Both chambers have a history of passing their own versions of tax reconciliation bills and then cutting a deal on the final provisions. In an evenly split Senate in 2003, several centrist Republicans won a budget fight to sharply reduce the size of the Jobs and Growth Tax Relief Reconciliation Act

to about $350 billion, shrinking a number of temporary incentives including a 15% rate for capital gains and dividends and a $1,000 child tax credit.

Finance Chairman Ron Wyden, D-Ore., has stressed his desire to advance a committee-approved package of clean energy incentives in the reconciliation bill and his belief that there is public support for tax hikes aimed at corporations and the wealthy. "Now, the American people agree with us that everybody should pay their fair share of taxes," Wyden told reporters.

On the other side, Republicans have opposed tax hikes for corporations and wealthy families and are looking for openings to promote their own tax priorities. For example, some Republicans want to extend full expensing for research and experimentation costs before it is replaced next year by a five-year amortization schedule under the 2017 Tax Cuts and Jobs Act.

Rep. Kevin Brady, R-Texas, ranking member on the Ways and Means Committee, said he and other Republicans would continue trying to preserve rate reductions in the tax overhaul and warned that the reconciliation bill would amount to a "crippling tax increase and spending binge."

Senate Minority Whip John Thune, R-S.D., a senior member of the Finance Committee, said he was looking for ways to try to block Biden's plan to require the payment of taxes on unrealized capital gains at death and the proposed elimination of tax incentives for oil, gas and coal production.

Sen. Todd Young, R-Ind., a Finance Committee member and former chairman of the National Republican Senatorial Committee, said the GOP would argue tax hikes on corporations and wealthy business owners would have negative effects on employees dealing with economic effects of the coronavirus pandemic.

"Coming out of a global pandemic, increasing the tax rate on our employers would hurt workers," Young told Law360.

Facing such GOP attacks in the run-up to the 2022 midterm elections, Sen. Jon Tester, D-Mont., a former chairman of the Democratic Senatorial Campaign Committee, said the bill's popularity with voters probably would depend on how they view the use of revenue raised by tax hikes.

"It's going to depend on how it's spent and if it's wasted or not," Tester told Law360.