A federal court on Wednesday denied states a preliminary injunction in a case several state attorneys general have filed to invalidate a provision in the recent federal coronavirus aid package that prohibits states from using federal funds for tax cuts. 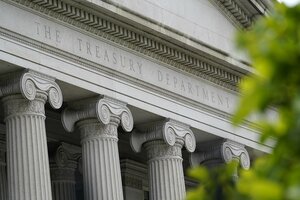 A group of 13 states sued the U.S. Treasury over part of the recent coronavirus aid package that disallows states from using federal funds for state tax cuts. (AP Photo/Patrick Semansky)

An Alabama federal court said that while the states have standing to pursue the claims in their complaints and those claims are ripe, it would not preliminarily enjoin enforcement of a provision in the recently enacted American Rescue Plan Act

because it is not warranted. The attorneys general have asked an Alabama federal court for declaratory relief, arguing that it would be unconstitutional for the federal government to broadly interpret restrictions on federal dollars stemming from the law.

The court said the states failed to prove they will suffer irreparable injury unless the court issues a preliminary injunction.

"The problem for the plaintiff states in their quest for a preliminary injunction is that the preliminary injunctive relief that they request from this court is an order prohibiting [Treasury Secretary Janet Yellen] from exercising her recoupment powers until this court issues a merits decision in this case," the court said. "But recoupment of ARPA funds is a quintessentially reparable injury because it can be 'undone through monetary remedies.'"

The court added that if Treasury were to recoup funds from the states in the midst of the lawsuit and the court ultimately issues a permanent injunction and declares the provision unconstitutional, the court could simply order the funds returned to the states.

The suit deals with a federal provision that prohibits states from using the $350 billion cash infusion to "directly or indirectly offset … net tax revenue" via state laws or regulations, or through rate cuts, rebates, deductions, credits "or otherwise." States that don't comply with the provision would be required to repay funds equal to the amount of tax cuts they gave.

The states claim that they are being harmed because they must soon make a decision whether to certify compliance with the federal law's substantive provisions and because their legislatures do not currently know if they can cut taxes for their constituents without suffering future recoupment, according to the decision. The court noted that regardless of whether it grants or denies the motion for preliminary relief, states still must consider that if they accept the funds, the money could be recouped if the court ultimately declines to issue a permanent injunction.

"Thus, granting a preliminary injunction in this case does nothing to remedy the plaintiff states' alleged harm, which is that they are having to decide whether to certify participation in ARPA without clarity as to what the federal tax mandate means," the court said.

The court also said that there is virtually no likelihood Treasury will recoup the money from the states before the court makes its final decision.

The suit includes several of the 21 Republican state attorneys general who sent a letter in March to the U.S. Department of the Treasury and Yellen demanding that they weigh in on the provision and interpret it narrowly, while also threatening legal action. Other attorneys general who did not sign the letter joined the suit, suggesting growing Republican opposition.

Yellen responded in a letter to the attorneys general that the $1.9 trillion coronavirus relief law doesn't prevent states from enacting a broad variety of tax cuts. States could still enact tax cuts provided they are not offset by federal funds, Yellen said, adding that states that do offset those cuts with federal funds risk only the amount of funds used in the offset.

But in the complaint the attorneys general filed in April, they said Yellen's response failed to set limits on how Treasury would determine when federal funds were "indirectly" used to offset tax cuts.

Yellen's response also didn't provide a timetable for when Treasury would provide formal guidance on the provision, the state attorneys general said, while state legislatures must operate their current legislative sessions with little understanding of how their work will implicate the provision.

The court has not acted on a motion by the Wisconsin Legislature to intervene in the case.

Representatives for the state attorneys general did not immediately respond to a request for comment Wednesday.

The offices of Treasury, the U.S. Department of Justice and the other state attorneys general did not immediately respond to requests for comment.

Treasury is represented by Michael P. Clendenen, Stephen Ehrlich and Charles E.T. Roberts of the U.S. Department of Justice.