A D.C. federal judge on Tuesday allowed former Trump campaign deputy chairman Rick Gates to return to his home in Virginia, suspending his 45-day intermittent jail sentence to shield his wife from possible COVID-19 exposure while she undergoes cancer treatment. 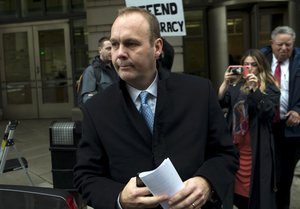 Rick Gates pushed to suspend his intermittent jail sentence on the basis that his travel in and out of jail during the COVID-19 pandemic would be a threat to his wife's health. (AP)

U.S. District Judge Amy Berman Jackson issued the decision in a minute order two days after Gates' attorney made the request on the basis that his client's wife is continuing cancer treatment and her husband's travel in and out of jail would be a threat to her health.

Gates' attorney Thomas C. Green of Sidley Austin LLP said prosecutors at the U.S. Attorney's Office for the District of Columbia supported Gates' request, but he didn't say how many days Gates has served so far.

Gates, 47, was sentenced in December to the 45-day jail stay and three years' probation after serving as a star witness in former special counsel Robert Mueller's wide-ranging probe into Russian interference in the 2016 presidential election.

In Tuesday's order, Judge Jackson declined to grant his request to serve the remainder of his sentence at home, but instructed probation officials to submit a report to the court by May 5 on the status of Gates' compliance with the term of the sentence, "including the number of weekend days of confinement defendant has served and the number of hours of community service he has performed."

Green told Judge Jackson on Sunday that the "massive societal disruptions caused by this pandemic are tragic, and the burdens they have placed on Mr. Gates and his family warrant a modification of the condition on his probation."

Gates, a father of four and a Virginia resident, "must now provide additional care for his family for the foreseeable future while his wife continues her treatment for and recovery from cancer," the attorney added.

"The gravity of the virus and its potential impact on Mrs. Gates are substantial. If Mr. Gates were to return to his home carrying the virus, it could create serious ramifications for his wife," Green wrote. "Due to her cancer treatment, her immune system is compromised, placing her at heightened risk for serious side effects or worse if she were to be infected with the coronavirus. Aside from matters of health, the pandemic has created additional pressures on the family."

The Federal Bureau of Prisons website shows Gates is under the supervision of its Residential Reentry Management office in Baltimore.

Gates was initially facing up to 10 years in prison, but prosecutors later asked for a more lenient sentence, saying he provided "extraordinary assistance" to the government following his plea deal. He faced a variety of charges stemming from Mueller's probe, including money laundering, tax evasion and efforts to avoid reporting "foreign agent" status to the U.S. government for lobbying work performed on behalf of pro-Russia politicians in Ukraine.

Gates is one of six Trump associates to be convicted on charges brought by Mueller, including the president's former campaign chairman Paul Manafort and former lawyer Michael Cohen.

Manafort's attorneys asked the Bureau of Prisons' director last week to allow the 71-year-old to complete all or part of his remaining sentence in home confinement. In a letter dated April 13 seen by Law360, they wrote that his age and preexisting health conditions put him at a "high risk" of contracting COVID-19 at the Federal Correctional Institution, Loretto, a low-security facility in Pennsylvania.

As COVID-19 cases continue to increase nationwide, federal courts have been under mounting pressure to release vulnerable inmates.

U.S. Attorney General William Barr, who oversees the Bureau of Prisons, earlier this month urged federal prosecutors in a memo to take the pandemic into consideration when deciding whether to seek pretrial detention for defendants who present little risk of flight or harm to the community, or in cases where the defendant is particularly susceptible to COVID-19.

The government is represented by Zia Mustafa Faruqui and Molly Gaston of the U.S. Attorney's Office for the District of Columbia.