Democratic presidential nominee Joe Biden is pushing a substantial, temporary expansion of the child tax credit in response to the novel coronavirus pandemic, including making it fully refundable, according to a Thursday statement from his campaign. 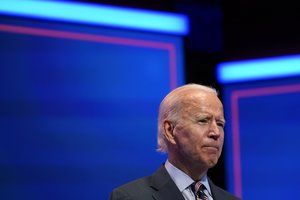 Biden's proposal  is similar to a provision in the House-passed Heroes Act, which makes the child tax credit fully refundable for 2020. (AP Photo/Patrick Semansky)

According to the campaign's release, Biden would increase the child tax credit to $3,000 per child ages 6 to 17, and $3,600 per child under six years of age. The expanded credit benefits would be available for the duration of the crisis, according to the statement.

The proposal is similar to a provision in the House-passed Health and Economic Recovery Omnibus Economic Solutions Act, or Heroes Act. That measure called for making the tax credit fully refundable for 2020 and expanding amounts to $3,000 per qualifying child, or $3,600 per child under six, according to a summary.

Under current law the maximum credit is $2,000 per qualifying child, according to the Internal Revenue Service. There is a refundable portion of the credit called the Additional Child Tax Credit, and if a family's liability is lower than the value of their child tax credit, they may be eligible for a refundable credit of up to $1,400 per qualifying child, according to the Congressional Research Service.

The call for an expanded child credit follows the Penn Wharton Budget Model releasing a report Sept. 14 saying Biden's platform would raise $3.4 trillion in revenue. Under Biden's plan, the top 1% of income earners would face about 80% of tax increases, and no households earning $400,000 or less annually would face higher taxes, the report said. However, they could see their after-tax incomes lowered through reduced investment returns and wages resulting from plans to raise corporate taxes, according to the report.

In July, Biden also released a proposal calling for tax credits for families to help cover child care costs and for employers to provide child care services on-site. Biden said when introducing the plan that child care expenses for low to middle-income families would be capped so they wouldn't spend more than 7% of their annual income.

Asked for comment, the Biden campaign noted his previous support of the Heroes Act and declined to say more.