President Joe Biden recently released a proposal to tackle the novel coronavirus pandemic, but there are additional ways that his administration could pressure Congress and direct the IRS to provide tax relief at the federal, state and international levels. 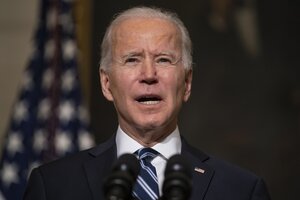 Tax professionals, however, said Biden should also address the ability of partnerships to use current legislative relief, how federal law can mitigate state tax issues with remote workers and provide clarity or relief for U.S. residents who should be working abroad but are not due to COVID-19.

The IRS should help partnerships take advantage of the benefits provided in legislation such as the Coronavirus Aid, Relief and Economic Security Act

, according to Glenn Dance, a partner at Holthouse Carlin & Van Trigt LLP.

Such help should include waiving "prohibitions against amending partnership tax returns in connection with retroactive changes to the … business interest expense deduction rules included in the CARES Act," Dance said.

In April, the government issued a revenue procedure

allowing partnerships created under the Bipartisan Budget Act of 2015

to file amended returns for tax years beginning in 2018 and 2019 to receive retroactive relief under the CARES Act.

This relief was helpful, Dance said, since it allowed BBA partnerships to file amended returns that were unrelated to the CARES Act, but the window to amend a partnership return closed in September. That means BBA partnerships currently cannot file amended returns to benefit from an item in the Consolidated Appropriations Act related to shortening the depreciation life for certain residential real property, he said. The CAA became law on Dec. 27.

Dance told Law360 that he is currently drafting a follow-up comment letter urging the IRS to make it easier for BBA partnerships to amend their 2018 and 2019 returns in light of the CAA, which provided additional tax relief. It would be surprising if the IRS failed to allow partnerships to amend their tax returns again as it did following the enactment of the CARES Act, Dance said.

"In the immortal words of Yogi Berra, it's déjà vu all over again," he said.

, which imposes a 30% deduction limit on interest expense deductions. Before the CAA, partnerships that are real property trades or businesses could elect out of Section 163(j) but had to apply a 30-year alternative depreciation recovery period to any property placed in service before 2018. In 2019, Revenue Procedure 2019-08

The CAA was passed at the end of December, which means partnerships cannot amend their returns to take advantage of the changes to Section 163(j) because the amendment window already closed in September, Dance said.

The IRS should also once again specifically allow partnerships to be able to amend returns in 2018 and 2019 in order to make or revoke elections out of Section 163(j) if they operate residential real estate properties, Dance said. That way, partnerships can fairly evaluate whether the changes under the CCA warrant a "do-over" with respect to decisions made in prior years with respect to that Section 163(j) election, he said.

One important state-related tax item that should be on Biden's agenda is addressing the growing trend of states potentially imposing double taxation on residents who work remotely because of COVID-19, said Edward A. Zelinsky, a tax professor at Yeshiva University's Benjamin N. Cardozo School of Law.

Because of the pandemic, more people are working remotely full time from a state other than the one where their office is located. but under some state regulations, including an emergency change in Massachusetts, they may be forced to pay state income taxes to both their resident state and the state where their job is, he said.

"If you said to me, 'What could the Biden administration do that is really COVID related?' I think the most important thing that the COVID issue has taught us are the tax consequences of remote work," Zelinsky said.

Other states, including New York, Delaware, Pennsylvania and Nebraska, had regulations in effect that effectively subjected the income of remote workers to taxation in the states before COVID-19, Zelinsky said.

Zelinsky, who is a resident of Connecticut but whose job is in New York, said even though he had not set foot in New York since March, he still owes state income taxes in both New York and Connecticut.

The U.S. Supreme Court is currently reviewing a challenge to Massachusetts's telework tax rule initiated by the state of New Hampshire. Zelinsky wrote an amicus brief in support of New Hampshire's position that the rule is an "unconstitutional double- and over-taxation of interstate remote workers."

In January, the Supreme Court held a conference call on the case, State of New Hampshire v. Commonwealth of Massachusetts, and asked the solicitor general to weigh in on the matter. But the court has not yet decided whether to hear the case.

"We literally have hundreds of thousands of Americans who are potentially subject to states like New York and now Massachusetts," Zelinsky said. "This can't be a good thing for everybody, except for the states that are doing the double tax."

In response, Biden could throw his weight behind previously introduced legislation such as the Multistate Worker Tax Fairness Act of 2020, or H.R. 7968. That bill, introduced in August by Rep. James A. Himes, D-Conn., would make it illegal for states to impose income tax on employees who work remotely for an out-of-state employer.

The legislation would need to be reintroduced because it expired at the end of the previous Congress, but it would garner more steam if Biden supported its reintroduction, Zelinsky said.

Similar legislation has been unsuccessfully proposed in past years. In 2012, Himes co-sponsored the Telecommuter Tax Fairness Act, which had a companion bill in the Senate sponsored by Connecticut's senators at the time, Richard Blumenthal and Joe Lieberman.

"I'm sure it'll be reintroduced, but the problem is that it needs some political muscle," Zelinsky said.

In April, the IRS issued a revenue procedure that outlined tax relief for U.S. residents or citizens who normally live abroad but are now stuck in the U.S. due to COVID-19. That revenue procedure

allowed U.S. citizens who are residents abroad and whose income is excluded from taxation under Section 911

of the tax code to stay in the U.S. longer because they cannot live abroad due to the novel coronavirus.

U.S. citizens who live abroad can benefit from Section 911, which allows foreign earned income and housing costs to be excluded from taxable income if certain conditions are met. The income exclusion amount was $107,600 for tax year 2020. To qualify, an individual must meet a physical presence test by living abroad for at least 330 days over 12 months, or a bona fide residence test by residing in another country for an uninterrupted period, including a whole tax year.

The revenue procedure allowed people who left China on or before Dec. 1, 2019, or left another foreign country on or after Feb. 1, 2020, but only up until July 15, to meet the requirements of Section 911, the IRS said.

While the guidance provided relief until July 15, 2020, many U.S. citizens may still not be able to return to their foreign country of work, and the Biden administration should encourage the IRS to address the issue, said David G. Shapiro, a tax partner at Saul Ewing Arnstein & Lehr LLP.

"This is something that I think needs to be made a priority at IRS: dealing with the increasingly common problem of people crossing borders and managing the tax compliance around it," Shapiro said. "There's so much going on internationally about tax that is so focused on the large corporate taxpayers that the smaller folks get lost."

During the first half of 2020, U.S. citizens living abroad got a pass, he said, but the regular rules applied in the second half of last year. However, people who may have had to stay in the U.S. past July could lose the Section 911 exception and may still have to pay housing and other costs in their foreign country of residence.

These costs could be expensive, especially for those who live in countries such as Switzerland or the U.K., he said.

Biden could direct the IRS to craft some limited exclusion such that if a U.S. citizen has international housing costs that must be paid under a lease, that amount could be excluded from taxable income, Shapiro said. The limited exclusion could require certification of the inability of a person to return to a foreign country, he said.

"I'm not sure whether … it's at the top of the list, but there's definitely a significant group of people who now have to carry the cost of a residence outside of the United States that they can't go to," Shapiro said.