A looming Senate impasse on the $15 hourly minimum wage proposal in the House version of the bill for President Joe Biden's pandemic response plan has fueled talks to combine a less ambitious new wage standard with business tax breaks. 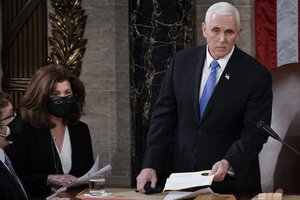 Elizabeth MacDonough, the Senate parliamentarian, was present with Vice President Mike Pence at the certification of Electoral College ballots on Jan. 6, before a mob stormed the Capitol. (AP Photo/J. Scott Applewhite)

Several senior lawmakers in both parties predicted talks aimed at cutting a bipartisan deal on the minimum wage and business tax incentives would gain steam because Democrats face hurdles in trying to salvage the proposed $15 minimum wage.

The ambitious new wage standard passed the House early Saturday by a 219-212 vote as part of the filibuster-proof reconciliation bill, H.R. 1319, for Biden's $1.9 trillion American Rescue Plan, but it faced a big Senate procedural roadblock. A ruling by Elizabeth MacDonough, the Senate parliamentarian, cleared the way for Republicans to kill the minimum wage proposal in the Senate by raising a Byrd rule point of order against a reconciliation provision that does not have a significant impact on the budget.

The Byrd rule sets limits on what policies the Senate can legislate through the budget process.

Despite that ruling, House Speaker Nancy Pelosi, D-Calif., has said the House will keep the proposal to raise the hourly minimum wage to $15 from $7.25 in the reconciliation bill.

Senate Minority Whip John Thune, R-S.D., a tax writer on the Finance Committee, said the GOP would raise a Byrd rule point of order to torpedo the $15 minimum wage if it came to the floor of the evenly divided Senate. He predicted all 50 Senate Republicans would be unified in sustaining the objection, which can only be waived by a 60-vote Senate majority.

"I hope some Democrats would recognize the harm it would do to the economy and the jobs that it would cost and will work with us to try to knock that out," Thune told Law360.

As Republicans rallied to oppose the reconciliation bill, Senate Democratic leaders faced tough choices in deciding whether to water down or jettison the $15 minimum wage to try to expedite final action before the March 14 expiration of jobless aid enacted in the Consolidated Appropriations Act.

But Wyden was unclear on whether the proposal would draw support from any wavering senators, including Manchin and Sinema, potentially in lieu of a $15 minimum wage. The top Senate tax writer has stressed his support for Biden's plan to raise the minimum wage.

If Democrats cannot agree on a $15 minimum wage or on replacing it with a version of the Wyden proposal, party leaders could face pressure from progressives to use the so-called nuclear option to change Senate rules and eliminate certain procedural objections by simple majority vote. But such a vote would require the support of all 50 members of the Democratic caucus and a potential tie-breaking vote by Vice President Kamala Harris.

While Democrats tried to resolve a split in their ranks on the minimum wage, Sen. Ben Cardin, D-Md., a senior member of the Finance Committee, predicted there would be an opening for lawmakers to try to cut a bipartisan deal on a regular-order bill to raise the minimum wage and provide business tax incentives.

Small-business tax incentives were omitted from a new proposal by Sens. Mitt Romney, R-Utah, and Tom Cotton, R-Ark. That proposal would raise the hourly minimum wage to $10 by 2025, with annual adjustments for inflation, and require all employers — not just federal contractors — to use the E-Verify system to check the immigration status of potential new hires.

But Cardin and Republican Sens. Rob Portman of Ohio, Susan Collins of Maine and Lindsey Graham of South Carolina said they believed small-business tax incentives would become part of the negotiations aimed at raising the minimum wage. They said they hoped to work with Manchin, Sinema and other lawmakers with an interest in working out such an agreement.

"The question is whether there is a bipartisan path on the minimum wage," Cardin told Law360.

"The second part of the question is, how do you minimize the potential impact, particularly on small businesses? You could deal with it with tax incentives or with a transition period," he added.

Manchin also voiced support for negotiations, urging lawmakers to focus on moving toward an $11 hourly wage standard to allow an entry-level worker to roughly match the current federal poverty level for a family of three: $21,960. He voiced concerns about the impact of a $15 hourly minimum wage on small businesses and on states with lower state wage standards, including West Virginia, which has an hourly wage benchmark of $8.75.

"They have to think of the whole country," Manchin told Law360, referring to negotiators on Capitol Hill.

Portman said the negotiations probably would encompass a number of proposals for incentives aimed at helping businesses counter the economic effects of COVID-19, the respiratory disease caused by the novel coronavirus. The ideas on the table include tax incentives for businesses to cover pandemic-related expenses, including expenditures to upgrade floor plans and equipment to protect customers and workers.

"It's something that makes sense," Portman told Law360, referring to a potential deal on a package combining a higher minimum wage and business tax incentives.

Several senior Republicans said they opposed any increase in the federal minimum wage. For example, Sen. Mike Crapo, R-Idaho, said the focus should be on state wage standards.

Despite the opposition of some GOP leaders, Graham, the ranking member on the Budget Committee, said he believed that he and some other Republicans would be willing to cut a deal under certain conditions. He said a higher minimum wage probably should be delayed until after the coronavirus pandemic ends.

In any case, he predicted small-business tax incentives would be a cornerstone of any deal on the minimum wage.

The White House didn't respond to a request for comment.