In a contentious Congress, a push by President Joe Biden to boost domestic manufacturing of essential goods during the novel coronavirus pandemic has sparked new efforts by both parties to move incentives aimed at prodding multinationals to expand U.S. production. 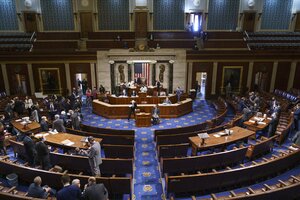 The U.S. House completed voting on the $1.9 trillion American Rescue Plan on Wednesday. While there were deep differences between Democrats and Republicans on that legislation, key players say there are good prospects for advancing new tax incentives for domestic manufacturers. (AP Photo/J. Scott Applewhite)

Key players in both parties said there were good prospects for advancing new tax incentives for domestic manufacturers despite deep differences over incentives for workers and their families and other items in the $1.9 trillion American Rescue Plan Act

signed by Biden last Thursday. They said both sides could agree on incentives for domestic factories in legislation for Biden's economic recovery plan or in a regular-order bill aimed at helping U.S. manufacturers compete with rivals in China on essential medical goods and technology.

Sen. Chris Coons, D-Del., a close Biden ally, said there was bipartisan support for incentives to spur U.S. production of personal protective equipment, drugs and vaccines needed to fight the novel coronavirus and manufacturing of semiconductors and other parts required to make automobiles, 5G wireless networks and other key products.

"There is likely to be legislation here that provides incentives for onshoring," Coons told Law360.

Senior lawmakers from both parties said they believed there could be consensus support for new incentives after Biden's Feb. 24 meeting with a small, bipartisan group of senators to discuss ways to broaden domestic manufacturing. In an executive order, Biden called for a 100-day review of needs and for new proposals to fill gaps, strengthen supply chains and move overseas factory jobs to the U.S.

According to the Bureau of Labor Statistics, domestic manufacturing jobs grew from 12.4 million in January 2017 to 12.8 million in March 2020, before falling with the pandemic's onset to 11.5 million in April 2020 and then gradually rebounding to 12.2 million last month.

While both sides agreed on the need for new tax breaks, there have been disputes over the structure of certain incentives and over efforts by Republicans to extend — and Democrats to reverse — items in the 2017 Tax Cuts and Jobs Act.

Despite ongoing disputes over the future of the tax overhaul, Senate Finance Committee Chairman Ron Wyden, D-Ore., will kick off efforts to build bipartisan consensus for legislation to promote the expansion of U.S. manufacturing at a hearing Tuesday. He has invited executives from Intel, Ford and the National Association of Manufacturers and a representative of the United Steelworkers union to discuss the tax code's effect on domestic manufacturing, and has signaled plans to develop legislative proposals.

Senate Majority Leader Chuck Schumer, D-N.Y., has opened the door to ideas for a potential bipartisan bill aimed at spurring investment in domestic manufacturers so they can "out-compete China and create new American jobs," with an eye on scheduling a spring floor vote.

As part of the deliberations on such legislation, Wyden has voiced general support for an idea that already has gained some traction on Capitol Hill: incentives for semiconductor makers.

A proposal backed by Sens. John Cornyn, R-Texas, a former GOP whip, and Sen. Mark Warner, D-Va., was mentioned in the White House meeting. The plan would create a 40% refundable investment tax credit for qualified semiconductor factory expenditures through 2024, followed by reduced tax credit rates of 30% and 20% in 2025 and 2026 respectively.

Cornyn said the measure would support the planned development of a chip fabrication plant in Phoenix by Taiwan Semiconductor Manufacturing Co. and encourage construction of similar factories by other manufacturers.

"It's more expensive to build in the U.S. than in Taiwan. That's why I think it's appropriate on a strategic basis for federal incentives to level that expense," Cornyn told Law360.

While he did not flatly endorse the proposal during the White House meeting, Biden said then that work by Cornyn and others on the plan was a "pretty good effort" to address the need for more domestic chip production.

"There's other aspects of shortages as well. That's what we're going to talk about," Biden said.

Among the participants in the meeting were three Finance Committee members: Cornyn, Warner and Sen. Rob Portman, R-Ohio.

As both parties continue to work on the issue, Sen. Todd Young, R-Ind., a Finance Committee member and former chairman of the National Republican Senatorial Committee, said there could be a deal on a package consisting of tax incentives and funding for programs to promote domestic manufacturing of chips and other products.

"It could conceivably incorporate the Cornyn bill or another approach," Young told Law360.

In the House, Ways and Means Committee Chairman Richard Neal, D-Mass., stopped short of embracing proposals for new tax breaks, but he made clear he wanted to develop incentives for domestic manufacturing.

Rep. Kevin Brady, R-Texas, the ranking member on Ways and Means, said he and other Republicans wanted to expand parts of the 2017 tax overhaul, including incentives to support research and purchases of business equipment.

For example, he said he and other GOP tax writers would try to revive a proposal from the last Congress to provide a tax credit to manufacturers of medical goods and drugs equal to 10.5% of the lesser of their income from making such products or overall taxable income. The incentive would be capped at 50% of Form W-2 wages for a company's employees and have the effect of halving the 21% corporate rate set by the 2017 law.

"We have to become medically independent from China," Brady told Law360. "There is no reason for us not to act in a bipartisan way on this."

Brady and Portman, a former U.S. trade representative, said many Republicans hoped to work with the Biden administration to develop incentives for domestic manufacturing. But they said both sides likely would need to work out differences over the structure of certain incentives.

For example, Portman and other Republicans have pushed for refundable business tax credits. Biden has promoted a plan for a 10% tax credit that would be advanceable — but not refundable — for investment in domestic manufacturing. While the full value of a refundable credit can be claimed by a company regardless of its tax liability, an advanceable credit must be reconciled against taxes owed after the incentive is claimed, or booked.

Despite the dispute over the structure of tax credits, Portman said there could be room to cut a deal on incentives aimed at strengthening domestic supply chains and increasing the number of manufacturing jobs.

"My hope is that we will do this in a bill under regular order," Portman told Law360. "It could be a big China bill. That's possible."