The IRS has pushed some tax deadlines to May 17, but practitioners hope the government creates more uniformity between the extended deadline for individuals and the April 15 deadline for C corporations, pass-through entities and first-quarter estimated filings for 2021. 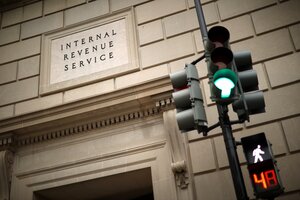 Some 60 members of Congress have urged the IRS to extend the first-quarter deadline because many struggling small businesses in their districts will not be able to file on time. (Photo by Chip Somodevilla/Getty Images)

On March 17, the Internal Revenue Service said it would push back the tax return filing and payment deadlines for individuals to May 17 from April 15 after facing pressure to do so because of the coronavirus pandemic and the new $1.9 trillion relief law.

Then on March 29, the IRS provided extensions to May 17 for other deadlines, including those for making contributions to individual retirement accounts, Roth IRAs and health savings accounts, and the deadline to claim a refund for the 2017 tax year.

With April 15 approaching, here are three other tax deadlines practitioners hope will also be altered.

Estimated taxes for the first quarter of 2021 are still due April 15, but tax practitioners hope the IRS reconsiders because many people, not just the wealthy, pay estimated taxes and may not understand their due date remains unchanged.

IRS Commissioner Chuck Rettig told a House panel last month that the IRS purposely excluded quarterly estimated payments from the deadline extension in order to reduce tax arbitrage since there are many wealthy individuals in the U.S. who do not pay estimated taxes.

They take money that should be "paid in estimated payment on a quarterly basis to the government and take the arbitrage and they invest it," Rettig said.

Melanie Lauridsen, a senior manager at the American Institute of Certified Public Accountants, said the decision to postpone the due date for individual returns for 2020 but not first-quarter estimated payments for 2021 means the IRS is arbitrarily determining who gets relief and who doesn't. For example, gig economy workers will still have to pay first-quarter estimated taxes on April 15 but may think that deadline has been extended, she said.

"A lot of people are new to this," Lauridsen said. "They hear that your individual deadline was postponed, and they're like, 'Yay, we got postponed until May 17,' but if they wait they'll get stuck with penalties and interest because they owed Q1 in April."

The AICPA, along with the National Association of Enrolled Agents, said in a March 25 letter to the IRS and U.S. Department of the Treasury that not pushing back the first-quarter estimated tax deadline for 2021 also ignored the needs of small businesses and individuals who have suffered because of the coronavirus pandemic.

Generally those who have to file estimated tax payments are those who expect to owe at least $1,000 in tax after subtracting withholding and refundable credits. Alternatively, if an individual expects federal tax withholding to be the smaller of 90% of the tax on the current year's tax return or 100% of tax on the prior year's tax return, then that person owes estimated taxes.

To figure out estimated tax payments, an individual can use a safe harbor by looking at the total amount of taxes paid in the prior year's tax return and make estimated tax payments of 100% of that, or 110% if adjusted gross income in 2020 exceeds $150,000 or $75,000 if one's filing status for 2021 is married filing separately.

Another way to determine estimated taxes is through determining first-quarter AGI, but the estimated taxes must be calculated to equal at least 90% of the final tax bill for the year; otherwise penalties will apply. For this reason, the safe harbor is generally preferred.

Because estimated payments for the first quarter of 2021 can be based on the 2020 return, it would be difficult for a gig employee to make an estimated payment in April when the tax return isn't due until May, Lauridsen said.

In a letter to Rettig dated March 31, 60 members of Congress also urged the IRS to extend the first-quarter deadline because many struggling small businesses in their districts will not be able to file on time.

"Many small and medium-sized businesses pay their quarterly estimated taxes based on their returns from the previous year," the lawmakers said. "If these businesses do not file until May 17, 2021, they will not know what their estimated payment liability will be for this filing year."

Joe Kristan, a partner at Eide Bailly LLP, said he did not understand why Rettig couched the decision not to extend the first-quarter estimated tax deadline in terms of the wealthy gaming the system, since that implies only wealthy taxpayers would benefit, when so many gig economy workers are affected.

Schedule K-1 of Form 1065 is used to report a partner's share of partnership income, while Schedule C of Form 1040 reports profit or loss from a business.

If the IRS chooses to stand firm and not change the estimated first-quarter deadline, then the government could at least waive penalties for late filing, Kristan said.

"I would waive the penalties until the same deadline as the individual returns, for consistency purposes," he said. "If you're changing things it's probably best to change things to all one day just to make it easier for people to understand."

The IRS and Treasury did not immediately respond to questions.

While the tax deadline for S corporations and partnerships cannot be extended, since returns were due on March 15, the IRS should also consider relief for late filings due to the coronavirus, according to Kristan.

The IRS notices did not push the deadlines for S corporations, which must file a Form 1120-S, or for partnerships that have to file a Form 1065, both of which were due on March 15.

"I think it was a big mistake to have not extended the pass-through deadlines because of [the coronavirus for] partnerships and S corps," Kristan said. "Because a lot of the small businesses that have pandemic troubles have to file those, too."

There's a systemic issue with the lack of tax deadline uniformity, and the deadline system should be changed to take that into account, he said.

"I think the deadline system is broken [because] I think the March and April deadlines were set for a time when the tax code was much simpler," Kristan said. "But now the tax code has become, for better or for worse … the vehicle for policy-making. It's the vehicle for trade policy, industrial policy and social policy, and by threading all of these things into the tax code it becomes much more difficult to comply."

The deadlines for pass-throughs and S corporations have already passed, which means penalties could already be accruing, he said.

A penalty is assessed against a partnership if it fails to file a return, or files and fails to show all the required information. The charge is $210 for each month or part of the month that the failure continues, for a maximum of 12 months, multiplied by the number of people who are partners during any part of the partnership's tax year when the return is due. Each failure to furnish a Schedule K-1 to a partner and include all required information may incur a $280 penalty for each instance, with a maximum penalty of almost $3.4 million.

There are also penalties for failing to file Form 1120-S. When no tax is due, filing late or not including all required information incurs a penalty of $210 for each month up to 12 months, multiplied by the total number of persons who were shareholders in the corporation during any part of the corporation's tax year for which the return is due. If tax is due, the penalty equals 4% of the unpaid tax for each month or part of the month, up to a maximum of 25% of the unpaid tax. If more than 60 days late, a minimum penalty is imposed equaling the smaller of the tax due or $435.

Since the March 15 deadline has already passed, the only recourse could be that the IRS waives penalties for late filing with respect to flow-through entities subject to that deadline, Kristan said.

"A lot of small businesses operate as partnerships and as S corporations and to ignore those things … is just wrong," he said.

The deadline to file Form 1120 for U.S. corporation taxes is still April 15. However, the interplay with recent guidance on the employee retention credit makes this deadline untenable, according to Adam Markowitz, enrolled agent and vice president of Howard L. Markowitz PA CPA.

provided a credit known as the employee retention credit, which is a refundable 50% payroll tax credit for up to $10,000 in wages for employers that had businesses partly or completely shut down or faced a significant decline in gross receipts between March 12, 2020, and Jan. 1, 2021. While the statute made Paycheck Protection Program loan recipients ineligible for the credit, the Taxpayer Certainty and Disaster Tax Relief Act

amended the CARES Act to strike that provision.

On March 1, the IRS issued guidance on how to utilize the credit and its interplay with PPP loans for tax year 2020, but did not address changes made to the credit and its application in 2021. That does not give tax preparers or companies a lot of time to figure out whether to take the ERC for 2020, Markowitz said.

Receiving the retention credit increases a company's aggregated gross income, so if a C corporation would otherwise have a zero bottom line but gets $50,000 in credits for tax year 2020, then it owes tax in April for 21% of that amount, which would be $10,500, he said.

It takes time for companies to digest the guidance to figure whether they'll make use of the credit and how much they could owe in taxes if they use it, he added.

"Just from a pure dollars-and-cents standpoint, it is so unreasonable for the IRS to think they can give us guidance on March 1 and expect us to turn it around in 45 days in the time when everything else is happening," Markowitz said.

On Friday, the government provided additional guidance on how the credit applies to the first and second quarters of 2021. But this makes paying estimated taxes for 2021 even more complicated, Markowitz said.

Now companies still have corporate returns to file and taxes for 2020 due on April 15, but if they also owe estimated quarterly payments due for 2021 on the same day, they have less than two weeks to figure out how two sets of guidance apply to 2020 and 2021, Markowitz said.

"We do have the tools, but with the employee retention credit, we literally have to go back and figure out what that credit is and capture that credit as taxable income to the 1120," he said. "And we only have another 10 days to do it."