A muted response by congressional Democrats to President Joe Biden's proposal to raise the corporate tax rate to 28% has set the stage for crucial intraparty talks aimed at reaching a compromise between Biden's proposal and the current 21% rate. 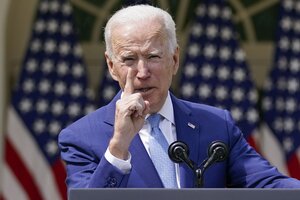 Several key Democrats said Biden and party leaders likely would need to settle for a smaller rate increase in order to move Biden's two-part recovery blueprint, which consists of the $2 trillion infrastructure plan he has proposed and an emerging plan to expand family incentives.

They predicted they would embark on an intraparty discussion of different scenarios for raising the corporate rate along with an assessment to gauge the impact of any changes on the ability of businesses to compete with foreign rivals and recover from the coronavirus pandemic. Democrats also plan to assess the effects of several relief measures, including the Consolidated Appropriations Act

House Budget Committee Chairman John Yarmuth, D-Ky., said the concerns of centrists in the party over the potential effects on small business of raising the corporate rate by 7 percentage points could force Democrats to restructure the proposal and reduce the rate increase to ensure action on Biden's plan.

Manchin said Monday on a West Virginia radio program that Biden's tax plan must be revised before it can pass the evenly divided Senate with the support of all 50 members of the Democratic caucus plus a potential tie-breaking vote by Vice President Kamala Harris.

"We're going to have some leverage here," he said.

Biden responded to criticism from lawmakers in both parties Wednesday by opening the door to potential revisions in his proposed new business tax framework, which includes an increased corporate rate and a new 15% minimum tax on book income listed in financial statements by companies with more than $2 billion in earnings.

"I am willing to listen to that, but we have got to pay for this. There are many other ways we can do this, but I am willing to negotiate that," Biden said.

In making the case for a 28% corporate rate, Biden and some liberal lawmakers have pointed to low effective tax rates paid by some corporations and a decline in the share of federal revenue that comes from corporations. A study by the Urban-Brookings Tax Policy Center found corporate taxes accounted for just 6.5% of total federal revenue in 2019 — down from 9% in 2017, before that year's tax overhaul — while most revenue came from income taxes paid by individuals and payroll levies.

Senate Finance Committee Chairman Ron Wyden, D-Ore., and House Ways and Means Committee Chairman Richard Neal, D-Mass., have endorsed the idea of raising business taxes to fund infrastructure. However, they made it clear that the size of any corporate rate increase and other tax items in legislation to advance parts of Biden's recovery plan would be decided after talks with members of the Democratic caucuses in both chambers.

"This is a big, hugely important issue because it speaks to fairness. It speaks to our ability to create high-skill, high-wage jobs in global markets," Wyden said in a conference call with reporters Monday.

A decade ago during President Barack Obama's first term, Wyden promoted a bipartisan tax plan with a 24% corporate rate.

and said in a written statement he planned to work with the administration on legislation that "can garner wide support and deliver for the American people." Neal has called for development of an ambitious infrastructure tax package.

Both chairmen have said parts of Biden's recovery plan could move in a second filibuster-proof reconciliation bill following up on passage of the American Rescue Plan Act,

which was framed by a fiscal 2021 budget resolution. Wyden said in a written statement Monday that a new ruling by the Senate parliamentarian, Elizabeth MacDonough, would allow Democrats to revise the budget resolution and "to consider moving additional bills through the reconciliation process."

As they try to rally support from wavering lawmakers, Democrats are examining ways to raise business taxes and potential additions to targeted incentives in Biden's plan, including renewable energy incentives and a neighborhood homes investment tax credit. Items on the table include payroll tax breaks and proposals to ease the $10,000 cap on state and local tax deductions.

While Democrats look to cut a deal on the corporate rate and tax incentives to expedite action on Biden's recovery plan, many Republican lawmakers attacked Biden's timetable for financing eight years of investment in infrastructure with 15 years of revenue from permanent business tax hikes. And some Republicans said they would try to rally opposition to the next reconciliation bill by stressing how raising the corporate rate and other business levies could torpedo investment and economic growth.

Rep. Kevin Brady, R-Texas, ranking member on Ways and Means, has argued for sticking to the current 21% corporate rate in order to encourage multinationals to continue to invest in the U.S. rather than in foreign countries with higher corporate rates. He said Democratic proposals to raise the corporate rate either to 28% or to 25% were "no longer competitive in this world" because most rival countries have lower rates.

In addition to raising concerns about how an increased U.S. corporate rate would exceed similar rates in foreign countries, Rep. Ron Estes, R-Kan., a member of Ways and Means, said GOP lawmakers would focus on the overall impact of an increased corporate rate and other tax hikes on the ability of a wide range of businesses to counter fallout from COVID-19, the respiratory disease caused by a coronavirus.

"Raising the rates in general is going to slow down that growth, slow down the opportunity to get people back to work," Estes told Law360.

In light of the strong opposition of Republicans and some Democrats to a 28% corporate rate, Sen. Mark Warner, D-Va., a senior member of the Finance Committee, said he expected many Democrats would have ample opportunity to suggest changes in the tax package for Biden's recovery plan. He said Democrats had two potential pathways to increase revenue: raising the corporate rate and restructuring taxes on corporate foreign income.

Warner took a neutral stance on Biden's proposed 28% corporate rate and said he would discuss his own concerns about Biden's plan in private talks with the administration.