The looming expiration of a temporary above-the-line deduction for charitable gifts has sparked a bipartisan effort on Capitol Hill to expand tax incentives for charities and their donors in legislation aimed at helping communities bounce back from the coronavirus pandemic. 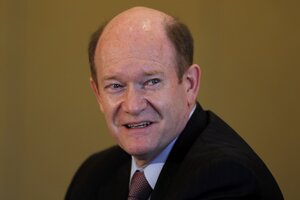 Delaware Sen. Chris Coons said he was working with another senator on a bipartisan proposal that would raise the cap on the above-the-line charitable deduction temporarily to one-third of the standard deduction for two years through the end of 2022. (AP Photo/Kamran Jebreili)

Key players in both parties predicted there would be a wide-ranging discussion on whether to extend or expand the current above-the-line charitable deduction, capped at $300 for single individuals and $600 for married couples, before it sunsets at the end of the year. They said proposals for expanding tax breaks for charitable donations could move in tandem with parts of President Joe Biden's recovery plan or in other legislation to address the economic fallout from the pandemic.

Proponents said changes were needed to continue to allow working families to claim a separate, or above-the-line, deduction for charitable gifts, while also claiming the higher standard deduction — $12,550 for individuals and $25,100 for married couples in 2021 — allowed under the 2017 tax overhaul. They said a more generous cap on the above-the-line charitable deduction would help ensure charities have broad support among low-income and middle-class families as well as wealthy ones.

Sen. Chris Coons, D-Del., a Biden ally, said he was working with Sen. James Lankford, R-Okla., a member of the Finance Committee, to promote a bipartisan proposal, S. 618. That bill would raise the cap on the above-the-line charitable deduction temporarily to one-third of the standard deduction for two years through the end of 2022, making the cap about $4,183 for single individuals and $8,367 for married couples in 2021.

Coons said the proposal's fate may hinge on support in both chambers for inserting such an incentive in a reconciliation bill to advance parts of Biden's recovery plan or in other legislation.

"It could depend on how big the tax section is for any package," Coons told Law360.

to provide married couples with a more generous $600 above-the-line deduction for charitable gifts in 2021. The law provided a temporary extension and expansion of the uniform $300 cap on the above-the-line charitable deduction both for single and married taxpayers enacted in March 2020 in the Coronavirus Aid, Relief and Economic Security Act

House Ways and Means Chairman Richard Neal, D-Mass., and Senate Finance Chairman Ron Wyden, D-Ore., have said they would examine the future of the above-the-line charitable deduction as they deal with Biden's recovery blueprint, which includes an infrastructure plan and tax incentives for working families.

"I'm open to a lot of these things. There are some Republicans who have said some encouraging things about these issues. I am open to these conversations," Neal told Law360.

He said he was discussing incentives for charitable giving with lawmakers in both parties as he tries to develop legislation to advance Biden's tax priorities.

Wyden also has signaled his interest in discussing the above-the-line charitable deduction with Lankford and other members of the tax-writing panel.

For their part, key Republicans have said they also are open to expanding the above-the-line charitable deduction, but they have stopped short, for now, of embracing Lankford's bipartisan bill. The bill has eight co-sponsors, including three other members of the Finance Committee.

Several senior members of the Ways and Means Committee said there was a strong desire among many lawmakers in both parties to include broader incentives for charitable gifts in several pending tax measures.

Rep. Don Beyer, D-Va., pointed to the panel's approval by voice vote Wednesday of a retirement savings tax package, H.R. 2954. The bill included his proposal to provide an annual adjustment for inflation starting in 2021 in the $100,000 annual cap on qualified charitable distributions from individual retirement accounts. Beyer said the committee markup demonstrated there could be support for more incentives to support charities and their donors.

"There are so many needs there," Beyer told Law360.

Since the last Congress, some advocates for charities have called for more incentives and have raised concerns about other issues, including the potential negative impact of several items in the 2017 tax overhaul

on the operation of charities. For example, they pushed for a provision in an omnibus spending law

enacted in 2019 to repeal the 2017 tax overhaul's levy on transportation and parking benefits for employees of nonprofit groups.

And they have continued to promote a more generous above-the-line deduction for charitable donations as a way to encourage working families, which now claim the expanded standard deduction in lieu of itemizing deductions, to give more to charity.

Roger Colinvaux, a professor at the Catholic University of America's Columbus School of Law, said the bipartisan proposal to tie the above-the-line charitable deduction to the standard deduction would provide an automatic adjustment for inflation and would "restore a substantial incentive to those who lost it in 2017."

He referred to the effect of the 2017 law in providing a bigger standard deduction to working families and making it less likely for them to itemize any deductions, including those for charitable gifts.

"One problem with caps on charitable giving is that the incentive to give stops once taxpayers reach the cap," Colinvaux told Law360. "Here, however, because the amount of the nonitemized deduction is substantial, for taxpayers that encounter the cap, depending on the amount of their other itemized expenses — state and local taxes, mortgage interest, medical care — they would still have an incentive to give above the cap to reach itemization status and then deduct all their charitable giving."

He said lawmakers "should pay for this or any expansion of the giving incentive with a floor under all giving."

According to a Congressional Research Service study, the creation of a floor of 2% of adjusted gross income for itemizers of charitable gifts would raise $14 billion in fiscal 2022, based on an analysis by the Congressional Budget Office. The CRS study found the estimated revenue gain from such a floor would roughly match the cost, or revenue loss, of an expanded above-the-line deduction for charitable gifts linked to the standard deduction, based on a pre-pandemic Penn Wharton Budget Model projection for 2020.

While lawmakers weigh potential offsets for expanded incentives, Coons and Lankford said they were hopeful the bipartisan proposal for a bigger above-the-line charitable deduction would gain support in the coming weeks. A similar House proposal, H.R. 1704, has been backed by about 10 lawmakers from both parties, including Rep. Jackie Walorski, R-Ind., a member of the Ways and Means Committee.

Walorski said the proposal to expand the above-the-line deduction through 2022 would allow time to assess the proposal's impact.

"We find out where we are in two years and look at making some of that stuff permanent, if it works," Walorski told Law360.

Republicans have signaled strong opposition to any increase in taxes on businesses and families. But some Republicans have said they would support the inclusion of bipartisan incentives for charitable gifts in broader bills that they oppose.

Lawmakers in both parties also are continuing to monitor the operation of donor-advised funds. They are exploring other ideas for expanding incentives for charitable giving, including possible continuation of the temporary suspension through 2021 of the cap on the traditional charitable deduction, which the 2017 tax overhaul set at 60% of adjusted gross income — up from 50% — through 2025. And they are examining whether to renew the temporary increased cap of 25% of taxable income both for corporate charitable contributions and for donations of food inventory, which expires at the end of the year.

Coons said proposals to expand incentives for charitable donations could help rally support among undecided Democrats for a reconciliation measure that moves toward Biden's vision for raising the corporate tax rate to 28% and the top individual rate to 39.6% to help finance his recovery plan.

"It's a way to attract some more support and to do something that I think is genuinely, broadly supported and positive for the American people," Coons said.