Businesses and residents in Maryland would receive a variety of state tax relief benefits to complement those in the latest federal coronavirus relief law under a $1 billion stimulus and tax package unveiled by the governor Monday. 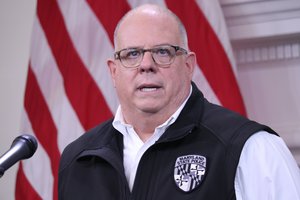 Republican Gov. Larry Hogan said he was introducing emergency legislation to provide more than $1 billion in extra relief from the hardships created by COVID-19, the respiratory infection caused by the novel coronavirus. The legislation would require approval from the Maryland General Assembly, which is controlled by Democrats. The General Assembly is scheduled to begin its 2021 legislative session Wednesday.

Targeting the loss of jobs because of the pandemic, Hogan proposed repealing all state and local income taxes on unemployment benefits. He also proposed extending an emergency order he issued in December, which needs the General Assembly's approval to remain in effect.

The order, issued Dec. 10, allowed the 2021 tax rate for a small business to be calculated using the fiscal years 2017, 2018 and 2019. Businesses could exclude fiscal 2020. Hogan said that between his emergency order and the new relief he was proposing, small businesses would get $326 million in benefits.

Hogan also proposed granting sales tax credits for businesses for as much as $12,000 over a period of four months. He said this would help 55,000 small businesses with a total benefit of $300 million. Hogan proposed banning any tax increases on income received via state loans or grants.

At a news conference, the governor said passing such relief should be the Legislature's top priority and urged lawmakers to be quick so "we can immediately get these much-needed dollars out the door and into the pockets of those who desperately need it."

The state's two top Democrats released a statement saying the governor had incorporated "our priorities for COVID recovery into his proposal." The statement from House Speaker Adrienne Jones, D-Baltimore County and Senate President Bill Ferguson, D-Baltimore City, said they looked forward to working with the governor on his plans but did not commit to a timeline.

Jones and Ferguson outlined other priorities they have, including revamping the state's unemployment system, providing additional benefits to seniors, including those in nursing homes, and getting students back into school for in-person instruction.

The stimulus money would be available to those families and individuals filing for the state earned income tax credit.