Where Health Care Enforcement Is Headed Under Biden

As anticipated, early actions by President Joe Biden's administration signal a robust enforcement environment in which there will be continued aggressive pursuit of fraud — including pandemic- and health care-related fraud.

The new administration's civil enforcement recoveries under the False Claims Act are likely to continue to exceed $2 billion annually. The U.S. Department of Justice recently announced that it recovered $2.2 billion in FCA settlements and judgments in fiscal year 2020.

Although that total was slightly less than the government recovered in recent years, and much less than some of the banner years in the 2010s when civil fraud recoveries included unusually large settlements involving the mortgage industry, it did not include substantial pending recoveries related to alleged fraud involving opioid manufacturers.

Statistics also suggest that FCA activity is likely to increase. The government and qui tam relators filed a record 922 new FCA cases in 2020, nearly 150 more cases than the prior year. The government was also more active in 2020 than in any other year, filing 250 new cases on its own, an increase of more than 100 from the year before. 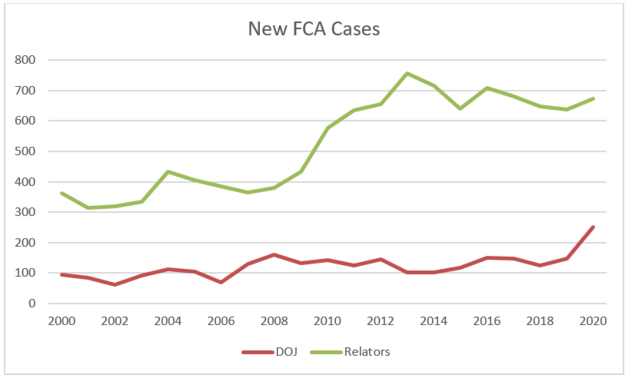 We expect that the Biden administration will prioritize enforcement actions related to the distribution and use of CARES Act and subsequent stimulus funds.

The DOJ recently announced that it already had charged nearly 500 defendants with criminal offenses related to COVID-19 fraud schemes involving $569 million in government funds. The DOJ stated that it would continue to "leverag[e] data analysis capabilities" and other tools to go after "high-impact white collar enforcement" involving COVID-19 fraud.

Most of the COVID-19 enforcement activity thus far has not involved the health care industry, but we expect that to change, especially given the current landscape.

The health care industry received billions of dollars in COVID-19-related relief. This included $178 billion under the provider relief fund, $100 billion in Medicare Accelerated and Advance Payment Program loans (which will start coming due for some providers this month), and an estimated $68 billion in Paycheck Protection Program loans.

In February 2021, the DOJ announced the first criminal indictment involving the intentional misuse of provider relief funds. Enforcement activity surrounding the health care industry and these programs is likely to continue as the government investigates whether providers met eligibility requirements, complied with program requirements or made false certifications regarding loan forgiveness.

The U.S. Department of Health and Human Services also issued a number of regulatory waivers during the pandemic, and the government is likely to investigate whether these were used appropriately.

In the Biden administration, the government is also likely to continue scrutinizing nursing homes, the medical technology industry and Medicare Advantage fraud.

Even pre-pandemic, the nursing home industry was a priority for the DOJ. The focus on elder fraud began early in the Trump administration, and the National Nursing Home Initiative was announced just before the pandemic.

Given the immense impact the pandemic had on the nursing home industry, there is little doubt that the DOJ will devote substantial resources to examine whether nursing home residents have been given medically necessary and appropriate care.

The DOJ will also want to ensure that pandemic-related funds devoted to skilled nursing facilities were properly expended and that certifications made to the government regarding use of the funds were not false.

Another area of announced enforcement emphasis concerns telehealth and electronic health records. Electronic software is of growing importance to the health care industry because of the efficiencies it permits. Its use undoubtedly will increase as providers and payers adapt to new interoperability and information blocking requirements from the Centers for Medicare and Medicare Services and the Office of the National Coordinator for Health Information Technologies.

But efficiencies through software can create new opportunities for fraud, and the DOJ is focused on examining whether the development and marketing of EHR software is done in a way that allows for the fraudulent manipulation of payments or reimbursements from government programs. Companies should ensure they are using appropriate software and generating accurate records. They should invest in regular and periodic audits to ensure that the software they are using is not tainted by any improper incentives.

Opioids will also continue to be a major focus of government enforcement, particularly because we have seen an increase in opioid overdoses during the pandemic. The government will pursue all actors in the chain and take enforcement efforts against manufacturers, prescribers and pharmaceutical companies for improperly prescribing, marketing and distributing opioids, as well as for alleged kickback arrangements related to medically unnecessary opioids.

Medicare Part C (also known as Medicare Advantage) has been, and will continue to be, another area of heightened enforcement. Unlike Parts A and B, where Medicare pays for each patient admission or service, Part C pays a capitated amount, which is risk-adjusted based on a patient's demographic information and health status.

Roughly a third of all Medicare beneficiaries — approximately 22 million individuals — are now covered by Medicare Part C. And in recent years, CMS has paid more than $233 billion annually on behalf of such beneficiaries.

As more and more Medicare beneficiaries shift to Part C, and as the government pays more and more annually through Part C, the DOJ will continue to investigate and bring enforcement actions related to the improper manipulation of payment codes and data in connection with Medicare Part C.

In 2018, the Brand memorandum announced that the DOJ's Civil Division would no longer use its "enforcement authority to effectively convert agency guidance documents into binding rules." This directive was added to the DOJ's Justice Manual, which now prohibits civil or criminal enforcement actions based on "mere noncompliance with guidance documents."

Overall, early actions by the Biden administration signal a robust enforcement environment in which there will be continued aggressive pursuit of fraud, including pandemic- and health care-related fraud.


Jenny Kramer is a partner, Jody Hunt is senior counsel and Matt Dowell is a senior associate at Alston & Bird LLP.

Sign up for our Insurance Authority General Liability newsletter