Global corporations are anxious about the Ukraine war's business tolls, while their insurers are already canceling coverage and adding exclusions for their losses in Russia, Belarus and Ukraine, broker Willis Towers Watson said in a risk management conference on Monday.

WTW's directors and risk managers from other companies discussed insurance coverage possibilities of the Ukraine crisis at a panel at Risk Management Society Inc.'s annual conference in San Francisco. 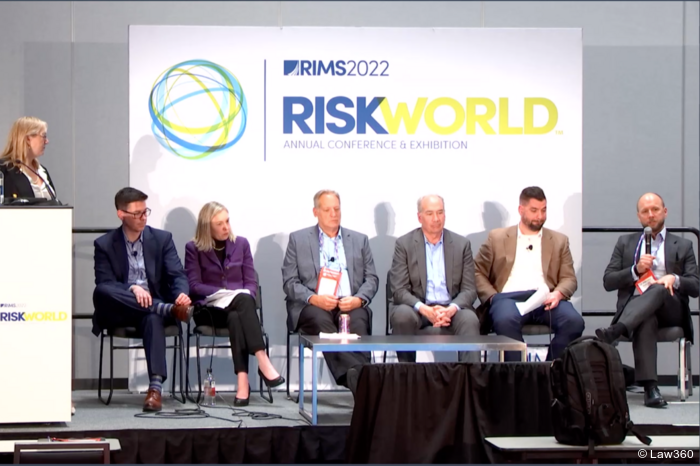 Willis Towers Watson directors and other companies' risk managers discussed the ramifications of the war in Ukraine on insurers and their business clients Monday at Risk Management Society's annual conference. (Video screenshot)

"Over the last 30 to 45 days, we've seen a huge increase in inquiries from clients," said Phillip Seel, WTW's head of special risks in North America. "They are asking about what insurance they have and who is insured from their workforce. Is it just their expatriates, and what about local nationals and business travelers?"

Some policies that provide evacuation coverage have endorsements that still exclude local nationals, he said. Insured companies are also concerned about detention risks if an individual employee or business traveler is detained under a false pretext by Russian or Belorussian authorities, Seel said.

In theory, policyholders can rely on special crime policies without territorial exclusions to cover their losses in the war. However, "we are starting to see insurers putting exclusions for Belarus, Russia and Ukraine for policy applications and renewals," the WTW director said.

Todd Aston-Reese, director of risk management at Equova Water Technologies, said Equova's insurer recently canceled the marine coverage policy of its cargo shipments within 48 hours of loss notice. The policy form has a cancellation clause that permits an insurer to cancel a policy at any time before its expiration date.

"We purchased an ocean cargo policy, and our insurer has the right to cancel the war risk coverage within 48 hours' notice. And they canceled our war risk coverage for Ukraine, the Black Sea and the Sea of Azov," said Aston-Reese. "Anytime you hear an insurance company canceling coverage you paid for already, that can be a scary situation."

The risk manager said the company also bought trade credit insurance that protects businesses against unpaid invoices, but the carriers activated the cancellation clause there too. Aston-Reese said he found political risk insurance appealing since it does not allow an insurer to cancel coverage.

Political risk insurance is the right kind of policy for businesses' exposure during a war, said Laura Burns, senior vice president of political risk at WTW. PRI policies are "noncancelable," she said. A carrier can't cancel the policy nor can it increase the premium during the policy period, which is usually multiple-year by design, ranging from three to 20 years.

The policy covers political perils relating to a government or political action that are typically excluded by a property-casualty policy, she said.

"With respect to Ukraine, we are working with many, many clients on political violence losses and forced abandonment coverage," Burns said. Policyholders get replacement cost payments when their assets are physically damaged or when the business can't operate due to war.

She said her team is closely watching asset expropriation risks at the moment as Russia has signaled that it will confiscate global companies' assets from "unfriendly jurisdictions" planning to exit the country. "This is obviously very concerning, as some of the multinational organizations have hundreds of millions of dollars' worth of assets and equity in Russia," Burns said.

Peter Foster, WTW's global head of cyber risks, said the brokerage has not seen any cyber losses directly attributable to the Russia-Ukraine crisis so far. "There is some potential, but nothing that has been attributed," he said.

However, cyber underwriters are already applying war exclusions to losses related to the Russia-Ukraine war and are trying to expand the definition of war exclusion to include terrorism and nation-state-related cyberattacks, he said. Insurers are also continuing their effort to add absolute cyber exclusions to property, liability and special crime policies, Foster said.

"There's a group in France that has been promoting that anything that ties back to war should not be covered," he said. If an insurer cuts coverage for the nation-state and terrorism-related cyberattacks during the discussion over the war exclusion, it will cut out a major piece of the policy, especially for a large organization, Foster said.

But insureds should not be pessimistic, because cyber policies have covered most nation-state attacks that resulted in ransomware losses, and insurers want their products to be sellable.

"Not one claim coming [out] of NotPetya was not covered under the cyber policy," he said, referring to the 2017 ransomware attacks on Ukraine's computer systems that wreaked havoc on global companies' networks, including $1.4 billion losses for Merck. The U.S. and U.K. governments have blamed Russia for the event, but the Kremlin called the accusation groundless.

Henry Darr, WTW's head of property claims, agreed. Insureds may experience an uphill battle when filing a Ukraine war-related claim under property policies due to the war exclusion, he said, but policyholders should not be discouraged because they have nothing to lose.

"It does not hurt their premium for making a claim," Darr said.

Sign up for our Insurance Authority Specialty Lines newsletter