NYC Evictions Creep Up As Housing Courts Get Busier

Signs of activity in New York City's housing courts — case filings and court-ordered evictions — are up compared to 2021, though still well below pre-pandemic levels, as tenants and landlords continue to grapple with the fallout of the coronavirus.

Monthly housing court data show eviction filings in the city, which have fluctuated during the pandemic, more than doubled this year through July compared to the same period last year, surpassing 54,900. Yet filings were still less than half their average volume for that stretch in the three years leading up to 2020. 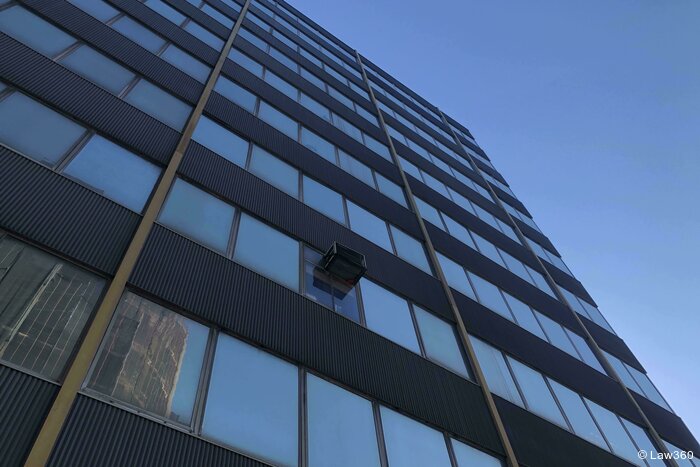 The exterior of Brooklyn's Housing Court. Courts are becoming gradually busier in the city, following a pandemic-induced slowdown. (Emma Whitford/Law360)

New York City's Department of Investigation tracks executed eviction warrants in a separate database, representing about 1,530 evictions through July. That's over 37 times as many as there were during the same period last year, though the city averaged more than 11,000 for that seven-month stretch in the years 2017 through 2019, before pandemic policies curtailed evictions dramatically.

Still, tenants are "feeling the imminent threat of eviction a lot more than they were two years ago," Patrick Tyrrell, a senior staff attorney at Mobilization for Justice Inc. who represents renters in housing court, told Law360.

This year has been notable in the trajectory of the coronavirus pandemic because a state law pausing most eviction cases was lifted on Jan. 15. At the time, New York had some of the longest-lasting pandemic-era eviction policies in the country.

But despite that step toward pre-pandemic court processes, attorneys described a unique tempo in housing court this year, shaped by a range of factors from lingering pandemic policies to shortages among court staff and tenant-side counsel.

A court-ordered eviction occurs when a city marshal arrives at an apartment to change the locks. By then, the associated case has wound its way through the court system, a process that can take months. Tenants may still be inside the home, or may have already left in anticipation of the marshal's visit.

Ryan Brenner, a policy research fellow at New York University's Furman Center who analyzes eviction data, explained that the execution of an eviction warrant is the last step "in a very long process where displacement could happen anywhere along the chain."

After a warrant is issued, but before it can be executed, the marshal must serve a notice at the apartment, starting a minimum 15-day buffer period. Renters can still fight an eviction after receiving such a notice. Yet "the more marshals' notices that get posted on doors, the more pressure there is to vacate," said Tyrrell, of Mobilization for Justice.

The issuance of warrants also jumped this year through July, though still well below comparable pre-pandemic levels.

To track the volume of court-ordered evictions, Law360 pulled data from the DOI database where marshals log each executed warrant. Complicating matters, multiple warrants can be associated with a single eviction, according to a DOI spokesperson.

"There are instances in which we have to execute two warrants for the same premises affecting only one physical space. I've had doubles, and I've had triples," he said. "You definitely execute them simultaneously. There's no reason to do it differently."

A single warrant can have multiple names on it, Renzulli said. Yet tenants within the same apartment may have different warrants if some fail to appear in court, or if the landlord does not know everyone's name at the outset of the case.

With this in mind, Law360 combined warrants executed by a single marshal at the same apartment and on the same date, associated with the same case number.

Tyrrell said many evictions executed so far in 2022 were likely at the cusp when pandemic policies paused them.

Mid-January marked the expiration of so-called pandemic hardship forms, which tenants could submit in order to pause their case.

"There may have been a bunch of cases stayed solely by the hardship declaration," Tyrrell said.

The Bronx consistently led New York City's five boroughs in court-ordered evictions in the years leading up to the pandemic, but has been outpaced by Brooklyn so far this year.

Michael C. Rosenthal, founding partner at Hertz Cherson & Rosenthal PC, said this may be due to court staff shortages, which have been particularly noticeable in the Bronx.

"Right now, there's such a terrible shortage of clerks in the Bronx … affecting court dates, when warrants are issuing," he said.

Reached for comment, Office of Court Administration spokesperson Lucian Chalfen said staffing shortages are an issue in "most places in the city," despite the state court system's aggressive hiring efforts.

Evictions are inching back from a pandemic-induced freeze.

Case filings have been accepted in New York City's housing courts since mid-2020, following a brief suspension that March when the coronavirus struck.

State data show filings began to rise in July 2020, but dropped to historically low levels throughout 2021, when tenants could submit hardship forms attesting to their pandemic-related struggles to pause their eviction cases.

Though those forms are no longer valid, a separate protective measure for tenants is still in effect: Renters who apply to the state's Emergency Rental Assistance Program, or ERAP, benefit from a stay in any pending eviction case.

Valentina Gojcaj, a property manager and owner primarily based in the Bronx, told Law360 that some of her tenants have applied for ERAP a second time, furthering case delays.

A significant number "of our tenants continue to still not pay their rent and then filed for a second ERAP, and basically once they filed for the second ERAP, it's automatically stayed," she said. "The courts just won't touch it ... it's very costly to challenge."

Increasingly, landlords have had success unpausing cases before the ERAP application is processed. But attorneys like Lisa Faham-Selzer of Kucker Marino Winiarsky & Bittens LLP say these challenges are the exception, not the rule.

"I definitely have seen an increase in starting cases" this year, Faham-Selzer said, though "plenty of landlords are deterred from starting cases because of the ERAP stay," she added.

"I remember in July [2019], I didn't file any cases because we didn't know what we were doing," she recalled. "It took a while for us to get acclimated to the new laws, and not even seven months later the pandemic hit. So we don't know what normal is anymore."

Tenant advocates, meanwhile, say recent increases in both filings and warrant issuances are concerning in light of a shortage of available attorneys to represent low-income families in housing court.

This spring, legal service providers across the city said they didn't have enough staff to keep up with new cases, while continuing to juggle older cases that had been administratively paused by hardship forms.

The shortage of legal staff means more tenants may wind up at a court appearance without an attorney, according to Lauren Springer, a tenant leader with nonprofit legal services provider Catholic Migration Services. Springer is also a member of the steering committee for Right to Counsel NYC, which advocated for a 2017 city law extending free legal representation to low-income tenants.

"What you're seeing is a return to pre-right-to-counsel-legislation days in which tenants are being forced to go to court without representation even though they're eligible for counsel," she said.

More than 80% of tenants who receive representation through the program in a given year are able to stay in their homes, according to a fall 2021 report by the New York City Human Resources Administration.

Marika Dias, director of the Safety Net Project at the Urban Justice Center, said her organization has been able to increase its staffing somewhat in recent months, but is still struggling to keep up with demand.

"It's very difficult to get in front of the shortage," she said.

Most landlords go to housing court intending to "recoup their rent," rather than to evict people, said Olga Someras, general counsel for the Rent Stabilization Association, a trade association for New York City apartment owners.

Yet attorneys for both tenants and landlords described particularly large volumes of rent debt in the coronavirus era that are difficult to resolve.

While ERAP has paid out more than $1.9 billion to the city's landlords, there are currently thousands of applications that have yet to be fulfilled. Meanwhile, tenants may owe more than the maximum 15 months that the program covers.

Nativ Winiarsky, Faham-Selzer's colleague at KMWB, told Law360 that high volumes of arrears may push more landlords to try to remove their tenants.

Landlords "are being put in a position to take corrective action because there's only so long a landlord can go without payment of rent," he said.

In some instances, tenant attorneys negotiate settlements and try to secure as many months as possible before a client has to move out. These agreements don't necessarily involve a marshal, and therefore may not be reflected in data on evictions executed.

This has been the experience of one Queens man, who says he is now hopeful about a move to Florida, after the pandemic dried up his electrical maintenance work. His attorney asked that Law360 withhold his name while the settlement, including a November move-out date, is finalized. The man's landlord alleges he stopped paying rent in April 2020.

"Everything happened because of COVID," the tenant said. "It affected my family ... my relationship I had with my landlord, even my mental health."

Tenants may also be faced with a rent increase and have no choice but to move, Leah Goodridge, a managing attorney at Mobilization for Justice, said. So-called "good cause" eviction legislation aimed at preventing large-scale rent increases faltered at the state level this spring.

"The numbers don't tell the full story," Goodridge said. "There is a lot of displacement happening, and it is not just with a marshal executing a warrant."

Note on methodology: Law360 counted executed evictions based on executed eviction warrants data from the New York City Department of Investigations, as it appeared on Aug. 9, 2022. In the majority of cases, there was one warrant per eviction, but in some, there were multiple. Residential warrants with matching addresses, boroughs, case numbers, dates and marshal names were treated as a single eviction. Case filing and issued warrant counts came from the New York State Unified Court System. Data for 2017 and 2018 was provided directly to Law360. Data for 2019 and after is available from the court system's website, reflected here as of Aug. 9, 2022.