COVID-19 Hit To NY Coffers As High As $7B, Comptroller Says

New York state is facing budget revenue shortfalls of at least $4 billion below projections because of the COVID-19 pandemic and, if things get worse, could take a hit of more than $7 billion, the state comptroller said Tuesday. 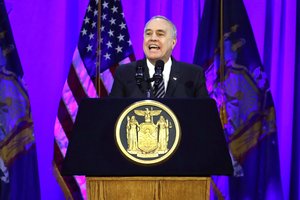 The New York state comptroller, Thomas P. DiNapoli, estimated that effects of the new coronavirus COVID-19 could cut $4 billion to $7 billion from a projected $87.9 billion in 2020-21 state tax revenue. (AP)

In a letter, DiNapoli also gave an "alternative scenario" if a severe recession or sharper declines in the stock market occur, which could lower tax revenues by more than $7 billion.

The new estimates come after Cuomo asked DiNapoli on March 10 to reconsider revenue outlooks in light of growing responses to the COVID-19 outbreak.

"Based on information as of March 13, 2020, the most optimistic revenue scenario is that All Funds tax revenues in state fiscal year 2020-21 will be at least $4 billion below projections of $87.9 billion in the executive budget," DiNapoli wrote.

But DiNapoli also warned that revenue outlooks for the state could be even more grim if conditions worsen.

"Given deteriorating conditions and the potential likelihood of a deep recession in the coming fiscal year, one alternative scenario suggests that tax revenues in SFY 2020-21 could be more than $7 billion below the executive budget forecast," DiNapoli said.

Matt Ryan, a DiNapoli spokesman, said the projections reflect that personal income tax is New York state's largest source of tax revenue and in past recessions revenue declines were typically concentrated there partly because of impacts on the financial sector.

Cuomo, speaking with reporters in Albany on Tuesday morning, called the new revenue projections bad and projections his administration made in January "overly optimistic."

"I'd love to say to everybody in the state, 'I know you're having a tough time, nobody pay any tax.' I would love to do that. I've cut taxes, I've cut taxes every year. But, we're not in a fiscal position to do that," Cuomo said.

"So there's talk about the April, that April 15 date being moved. We're talking about state sales tax. Our dates travel with them. So it really goes back to, essentially, the federal government will have to step in here to deal with this because we will have our own liquidity issues if we don't get some relief," Mujica said.

Cuomo called for a built-in mechanism in the budget that would adjust expenditures if revenues continue to slow.

The offices of Assembly Speaker Carl Heastie, D-Bronx, and Senate Majority Leader Andrea Stewart-Cousins, D-Yonkers, did not respond to requests for comment. But Stewart-Cousins earlier this week called for working toward an "expedited state budget" because of the pandemic crisis. The state budget is due by April 1, and already faced major fiscal hurdles.

E.J. McMahon, research director for the fiscally conservative Empire Center for Public Policy, said the new projections should lead to calls from Cuomo to reduce spending by at least $4 billion. But he said Cuomo needed to ask the Legislature to do so, saying the governor could no longer unilaterally rewrite his proposed budget bills since he's past the Feb. 21 deadline for 30-day budget amendments.

"However, he continues to avoid proposing or even discussing specific changes to the budget as it stood in mid-February, and the legislative leaders appear to be missing in action on the entire subject. It's remarkable," McMahon said.

"The state is anticipating billions of dollars in losses and the Legislature should not simply hand over all oversight of potential decisions to the executive in any budget, and instead revisit this budget as we move ahead," Flanagan said.

Flanagan also said lawmakers shouldn't deal with controversial or unrelated issues as part of the budget, especially at a time when groups of larger than 10 aren't recommended to congregate.

"It is undemocratic to slip policies into a budget that cannot be discussed by stakeholders who visit Albany or debated on the floor," Flanagan said.

Michael Fraser, a spokesman for Assembly Minority Leader Will Barclay, R-Pulaski, called the comptroller's projection troubling but not surprising and called for a budget extender that allows government to operate while also buying time to get a better financial picture.

"It's neither responsible nor realistic to develop a detailed spending plan during the most significant public health crisis in modern history. Right now, there are simply too many unknowns," Fraser said.

Laura Feyer, a spokeswoman for New York City Mayor Bill de Blasio, said the administration was "taking aggressive steps to slow the spread of the virus and mitigate the economic impact."

"The administration is closely monitoring this rapidly evolving situation and will issue a quarterly budget update next month that includes a revised revenue forecast," Feyer said.

The new estimates from the state comptroller come a day after New York City Comptroller Scott Stringer said he estimated the city could lose at least $3.2 billion in tax revenue over the next six months as a result of the economic impact of COVID-19 and public health measures.

Stringer suggested the city cut spending 4% for tax-supported agencies to find $1.4 billion in potential savings for vital services and the social safety net and recommended that the state defer sales and use tax payments due March 20 for restaurants, hotels and small storefront retailers.

John Kaehny, executive director of the New York open government nonprofit Reinvent Albany, told Law360 that in addition to the state and city estimates, the Metropolitan Transportation Authority could take billions of dollars in revenue losses to its operating budget because of the virus. The MTA said in a letter Tuesday it's projecting $4 billion in revenue losses due to decreased ridership by the end of 2020, which doesn't include expected losses from state and local sales and use taxes dedicated to the authority.

​​​​​​Kaehny said the federal government would have to provide a "massive bailout" to state and local governments so they don't default on bonds and further hurt the economy.

"Ad hoc bailouts of specific industries like airlines and cruise ships is idiotic. States and local governments cannot print money, the federal government can — and it must — or this is going to be complete fiscal catastrophe," Kaehny said.