Tax officials from around the world face immense pressure to negotiate an overhaul of the international tax system at the OECD by the end of the year, even as the coronavirus pandemic brings most work around the world to a halt. 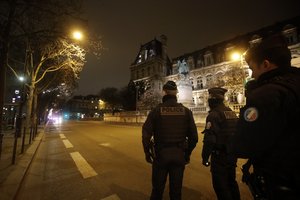 As Paris is under strict lockdown in response to the coronavirus pandemic, the OECD, which is based there, faces a stiff challenge in its mission to negotiate an overhaul of the global tax system by year's end. (AP)

Without an agreement to address taxation of online commerce and tax avoidance by multinational corporations, a trade war between the U.S. and Europe over targeted digital service taxes could still break out — whether the world is still battling the deadly virus or not.

The Group of 20 advanced economies set a Dec. 31 deadline in their initial 2017 letter, which began the Organization for Economic Cooperation and Development project. To extend it into 2021 sounds simple enough but would actually require some complex diplomatic chess maneuvers.

For now, OECD officials, based in Paris, vow that they’re committed to seeing the project through this year, resorting to teleconferencing as international travel is limited and the city is placed on a strict lockdown.

Initially, the plan was to spend most of 2020 nailing down technical details, with the OECD’s leadership hoping to strike an agreement between the parties by January. Most sides in the negotiation seemed warm to twin proposals from the OECD to enact a new taxing regime for remote sales and to encourage countries to enact international anti-avoidance rules similar to those included in the 2017 Tax Cuts and Jobs Act

Those two proposals would address concerns around the world about new digital forms of commerce, such as online advertising or data collection through social media, without targeting technology companies directly. The U.S. strongly opposes targeted digital services taxes, such as the one recently enacted by France, a 3% levy on revenue from certain activities including advertising and e-retail. By giving countries an alternative, the OECD hoped to stem the trend toward national, unilateral digital services taxes.

But the apparent deal blew up at the end of 2019, when U.S. Treasury Secretary Steven Mnuchin penned a letter to the OECD, expressing concerns about the proposal and urging countries to enact it as an option for taxpayers to use as an alternative to the current system. Chip Harter, deputy assistant treasury secretary for international tax policy, has said he believes the current proposal has no chance to pass the U.S. Senate, which would need to approve changes to existing tax treaties.

Alongside the blowup, in December the Office of the U.S. Trade Representative proposed tariffs of up to 100% on French products such as wine, makeup and handbags in retaliation to France’s digital services tax. The report followed blustery Twitter messages from President Donald Trump decrying France’s tax, but the administration has stopped short of imposing the tariffs so far. The U.S. and France reached a shaky truce in January to hold off on the tariffs as well as collection of the French tax through the end of the year.

Meanwhile, the U.K. is moving ahead with its own version of the digital services tax, which also won’t take effect until January 2021.

Despite these speed bumps, the OECD produced a statement in January expressing commitment from all of the parties. Pascal Saint-Amans, the organization’s deputy director for tax policy, said in a statement responding to a Law360 inquiry that he still hopes to reach a basic agreement by July before the finance ministers of the G20 meet in Saudi Arabia.

OECD officials have said that as far as they’re concerned, the Dec. 31 deadline is final and immovable.

And as a matter of political reality, it may be set in stone, or at least hard clay. If the OECD tries to work past the G20’s deadline, it risks delegitimizing the process, especially after it missed most of its own, self-imposed timetable. The G20 could write a new letter giving the project a new end date, if all 20 nations could agree.

But that wouldn’t be the whole matter. The U.S., France and the U.K. are all set to come to blows, economically, at the beginning of 2021 unless they can agree to another truce, potentially requiring the digital services taxes to be repealed. To coordinate this many moving parts would be highly difficult — and these countries don’t appear to be on the same page in the first place.

Brian Jenn, a former U.S. Treasury official who served as a delegate to the OECD, said coronavirus wouldn’t blunt countries’ urge to capture more revenue from online activity, and could even enhance it.

“You still have the problem of countries that are eager to tax the digital companies under some kind of new regime,” he said. “And as things settle in terms of the chaotic global environment now, they will be even more in need of revenue.”

Coronavirus, which causes the COVID-19 disease, has devastated brick-and-mortar businesses but has led to more online activity and purchasing as people around the world take shelter in their homes, which could lead countries to look to digital and technology companies as the most profitable industry to tax.

But other observers have concluded that continuing under these global conditions would be impossible.

“Tax policymakers around the world are and will continue to be under enormous pressure to come up with pro-growth measures as the global economy suffers from the pandemic,” said Jefferson VanderWolk, a partner at Squire Patton Boggs and a former tax official at the OECD.

The OECD’s proposals are “not conducive to growth,” VanderWolk said.

“Once policymakers think about that, I expect they’ll put a hold on the work,” he added.

As for the potential revenue from digital companies, it’s enticing but likely a drop in the bucket compared with the massive shortfalls governments will face once they’re finished responding to the pandemic and economic fallout.

In February the OECD released an analysis showing that most economies would gain “a small tax revenue gain” from the new sales-based taxing regime.

“It’s not a lot of money,” said Reuven Avi-Yonah, director of the University of Michigan Law School’s international tax program, who also predicted that the OECD would ultimately delay the project.

On Tuesday the OECD released a statement repeating that it was “working on full steam” on the project, and had ensured that all countries could still participate through virtual conferencing.