Deductions for stock-based compensation are one of the biggest reasons tech companies have managed to keep tax payments low despite surging profits — a result that is coming under new scrutiny as lawmakers look to strengthen the federal tax code. 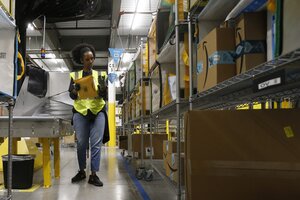 Differing methods for recording the expenses of stock options or other equity compensation can create a significant divergence between a company's taxable income and its profits as reported in financial statements. But many tax experts claim that despite the appearance of tax dodging, the current system isn't necessarily a bad deal for the Internal Revenue Service, and new policies to eliminate the disparity could create distortions or unnecessary complexity.

"There's no reason you would want the tax system to favor stock-based compensation more or less than cash-based compensation," said Donald Marron, director of economic policy initiatives at the Urban Institute, a left-leaning Washington, D.C.-based think tank. "You'd like the labor market to figure this out."

Democrats in Congress, starting with President Joe Biden, have excoriated many of the top U.S. companies for, they claim, using loopholes in the tax system to avoid payment on large profits.

In his April 29 address to a joint session of Congress, Biden cited a study from the Institute on Taxation and Economic Policy, a left-leaning research and advocacy group, which found that at least 55 of the largest companies in the U.S. paid no federal income tax, despite $40.5 billion in pre-tax profits.

While Biden blamed "tax havens in Switzerland and Bermuda and the Cayman Islands" as well as "tax loopholes and deductions for offshoring jobs and shifting profits overseas," the ITEP report itself noted that deductions for stock-based compensation was one of the biggest reasons why these companies had reduced taxable income.

"This tax break allows companies to write off stock-option-related expenses for tax purposes that go far beyond expenses they report to investors," ITEP said.

Amazon.com Inc., which was not on ITEP's most recent list but has been in years past, said its 2018 tax liability was reduced by more than $1 billion by stock-based compensation, according to the company's annual report.

In the past few decades, companies have increasingly relied on stock-based compensation, such as stock options that allow an employee to purchase stock at a certain, predetermined price regardless of its current market value, as a way to attract talent. For tech startups, this can be an easy way to reward employees while reducing upfront expenses. It also has been partially encouraged by the tax code, which has increasingly restricted the deductibility of other forms of salary for top executives.

Unlike other expenses, stock options do not typically require a cash payment from the company. While existing shareholders see the value of their shares diluted when an employee exercises the option, it doesn't normally create a new expense for the company's bottom line. It's what makes them a useful tool for new ventures — but also creates an accounting challenge for policymakers.

Stock options create both timing and valuation mismatches between a company's taxable income and its financial profit as reported to shareholders. According to rules set by the Financial Accounting Standards Board, or FASB, and required by the U.S. Securities and Exchange Commission, a corporation must record an estimated expense at the time the stock option is granted. The federal tax code, however, allows companies to claim a deduction based on the value of the stock at the time the employee exercises the option, which may be years later.

The difference in valuation creates an even bigger disconnect. When a company estimates the value of a stock option for financial accounting, it uses a formula based on what it has been in the past. The bookmakers also have an incentive to decrease that estimate as much as possible, to boost the company's earnings. But for the tech companies that have seen their stock skyrocket in recent years, the actual value of the stock when exercised is likely to be above that initial estimate.

For companies like Amazon, which grant stock options to hundreds of employees and whose stock is continually rising, this means that deductions for stock-based compensation can be much higher than the expenses recorded in shareholder filings for years.

Critics claim this is the opposite of how a tax system should work.

As chief counsel and staff director for the Senate Permanent Subcommittee on Investigations, Bean led inquiries into the issue over the past decade. According to a report issued by the committee in 2007, nine major U.S. companies had $217.7 million in book expenses for stock-based compensation, but claimed $1.26 billion in tax deductions for it between 2002 and 2006.

Levin and Sen. John McCain, R-Ariz., proposed legislation capping deductions for stock options by the recorded expense in financial statements. While that bill never caught traction, many Democratic lawmakers, as well as the Biden administration, have proposed new minimum tax rules that would seek to narrow the book-tax divide more generally. Biden's proposal, for instance, would create a 15% minimum tax based on financial accounting profit, for companies with $2 billion or more in income.

However, some tax experts warn about using legislation to narrow the gap between taxable income and financial profits for stock-based compensation.

One key benefit of the current system is that while corporations receive deductions, the employees receiving the compensation must pay regular income tax on the value of the options, according to Victor Fleischer, a tax professor at University of California, Irvine School of Law and former Democratic chief counsel to the Senate Finance Committee.

"You see companies taking big deductions at 21%, and executives including at 37%, and so obviously that's not a bad trade for the U.S." Treasury, Fleischer said. "It sort of makes me nervous when we move away from the matching rule, which in my view has served us pretty well."

Despite the political firestorm that low effective tax rates can provoke, it's ultimately better for taxable income to be measured in a way that's fair, stable and uniform, Marron of Urban Institute argued.

"It's really desirable to have the tax system not accidentally play favorites among different ways of compensating people," he said.

And there are administrative benefits to the government as well, he argued.

"The beauty of the way that we currently do it, you end up with easy-to-audit, and enforce, observable amounts," he said. "Particularly if it's a publicly traded company."

Advocates of change claim the system's defenders are focused on the wrong features.

"The confusion arises only because those experts are focusing on the wrong type of symmetry," ITEP stated in a 2019 report, authored by Bean, ITEP senior fellow Matthew Gardner and Steve Wamhoff, ITEP director of federal tax policy.

Bean also argued to Law360 that the current system actually favors stock options over other forms of compensation.

"It creates a tax incentive for corporations to hand out huge gobs of stock options, because they can minimize the book expense and maximize the tax deduction," she said.

A similar controversy played out on the accounting side of the issue in the 1990s. When FASB first considered rules requiring companies to record stock-based compensation as an expense, it provoked a backlash from corporate executives as well as Congress. Then-Sen. Joe Lieberman, D-Conn., sponsored a resolution in the Senate condemning FASB's proposal, which received 88 votes in support. FASB ultimately held off, enacting the rule in 2006.

The Biden administration has scaled back his initial campaign proposal, lifting the threshold to apply from $100 million to $2 billion in net income.

As with the earlier legislation on stock-based compensation, the minimum tax has been criticized by some tax experts who fear it could create distortions, especially for companies that experience changes in profitability.

"The tax system should be symmetric between gains and losses," Marron said. "Things that lean against that seem to be problematic."