The White House hopes that a proposal for a 15% corporate alternative minimum tax can break the logjam in negotiations with Republicans over how to pay for an infrastructure spending bill. 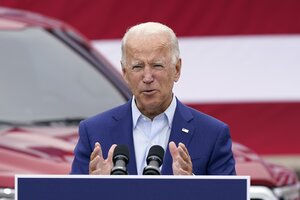 The tax would apply only to companies with low tax payments as compared with the profit reported in financial statements. Administration officials claim it would hit companies that are shirking their tax obligations — and thus, it isn't really a tax increase or a new tax.

But President Joe Biden and the Democrats face an uphill climb to convince Republicans of this. Republicans are likely to view the proposal as a major new taxing regime and a reversal of key provisions in the 2017 Tax Cuts and Jobs Act

Biden first proposed the alternative minimum tax — also called a minimum book tax, because it would be based on a company's financial books — during his presidential campaign, when he regularly blasted corporations such as Amazon.com Inc. for their low effective tax rates. Sen. Elizabeth Warren, D-Mass., also ran on a similar proposal, and has since pushed for it in Congress as a way to address what she claims is widespread tax avoidance among the top U.S. companies.

According to Treasury's recent Green Book analysis of Biden's budget proposals, the minimum book tax would apply to companies with worldwide book income of at least $2 billion. For those companies that pay less in a given year than 15% of their book income, the tax would be equal to the difference. But while book income doesn't take into account most government credits or deductions, the minimum book tax would still allow companies to reduce tax payments through credits for research and development, clean energy, housing and foreign taxes paid. It would also take into account net operating losses from previous years.

Treasury said this proposal would target "the most aggressive corporate tax avoiders," and administration officials say this is why it ought to appeal to Republicans wary of tax increases.

She added that opposing the proposal would mean "opposing the very enforcement of the 2017 tax law."

But critics of the proposal note that a minimum tax would largely target companies that have taken advantage of provisions in the TCJA, including the accelerated depreciation of new investments.

"It's mostly a back-door clawback of 100% bonus depreciation, which is a key TCJA policy," said George Callas, a managing director at Steptoe & Johnson LLP and a former Republican congressional staffer during the 2017 passage of the TCJA.

A minimum tax would also partially negate other policies that were not part of the TCJA, such as the ability to deduct costs for stock-based compensation. Differences in how the tax code and financial accounting rules measure the cost of stock options and other equity compensation can often create a wide difference in tax and book income.

The proposal is part of Biden's overall plan to reinstate worldwide taxation, as it applies to all of a company's income, not just what is earned in the United States. The TCJA exempted most offshore income from taxation, while giving income designated as global intangible low-taxed income a 50% deduction. Democrats claim these policies encourage companies to move income offshore to avoid taxation, one of the problems that the minimum book tax is meant to solve — complicating the case that it would not be a partial reversal of the TCJA.

"The 15% minimum tax would clearly be a tax increase on corporations," said J. Richard Harvey, a professor at Villanova University Charles Widger School of Law who specializes in both tax and accounting.

Harvey said that while the TCJA repealed a different corporate alternative minimum tax that had been in place since the 1986 federal tax overhaul, the two policies were different enough that he did not see the minimum book tax as a reinstatement of the past policy.

"Some Republicans may effectively be arguing that any tax increase is a repeal of the TCJA," he said. "I would disagree with this analysis, but it is a convenient argument to make and may carry the day with their political base."

The White House did not respond to a request for further comment.

One final reason that the proposal would be considered a new tax or tax increase is that it does score as a revenue-raiser — according to Treasury, bringing in $148 billion over the next 10 years. But that amount is smaller than earlier estimates of Biden's campaign proposal, which predicted that it could raise up to $318 billion. The new figure represents the narrow scope of the proposal, which would only hit top companies, and has led some to view it as more of a work of messaging than a serious policy.

"I think a book minimum tax is mainly symbolic. It would collect too little from too few," said Steve Rosenthal, a senior fellow at the Urban-Brookings Tax Policy Center. "Congress may prefer to go after news headlines, and avoid raising substantial corporate tax revenue."