President-elect Joe Biden ran on stemming international tax avoidance and ensuring that rich companies pay their "fair share" — but over the next four years he will face difficult choices on how to translate his aggressive campaign proposals into practical policies. 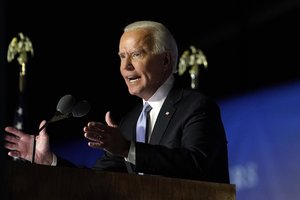 President-elect Joe Biden's campaign promises to stem international tax avoidance and establish a corporate minimum tax are quite likely to encounter to sharp resistance in Congress and from businesses. (AP Photo/Andrew Harnik)

Biden was declared the winner of the election Saturday after victories in Pennsylvania and Nevada, though President Donald Trump is maintaining multiple legal challenges to the outcome. Central to Biden's tax plan are proposed changes to the global intangible low-taxed income provision of the Tax Cuts and Jobs Act

, the anti-abuse measure that Biden and Democrats have claimed is too lenient. Regardless of who controls the Senate in the coming Congress, the administration will face skeptical lawmakers as well as businesses that claim that GILTI is already too onerous. The administration will also need to balance its campaign promises with management of a fragile economic recovery and hopes of keeping administrative burdens in check.

In the meantime, the Organization for Economic Cooperation and Development continues its work to forge a consensus between nations on how to best tax the digital economy. Despite some early eagerness, the Trump administration opposed current proposals to allow for remote taxation of sales and other online transactions. Biden's Treasury Department won't necessarily soften its stance, but fresh faces and a new tone could break the logjam.

At a speech in September in Warren, Michigan, Biden promised to "close each and every one of the Trump loopholes that he created in 2017 to reward companies with big tax breaks for offshoring."

Throughout his campaign, Biden has excoriated the TCJA, contending it allows or encourages companies to shift income to low-tax jurisdictions and move jobs offshore.

Whether GILTI does either of those things remains a topic of debate among tax practitioners and experts. But it is the focus of Biden's international tax proposals.

As it exists, GILTI levies a 10.5% tax on offshore "intangible" income, calculated as returns above 10% on a company's offshore depreciable tangible property. Because companies can claim some foreign tax credits on GILTI, it ultimately applies only if the overall foreign tax rate on that income is lower than 13.125%. Because the TCJA exempts most other foreign income from taxation, the GILTI tax is meant to discourage companies from moving valuable intangible assets — such as intellectual property — to low-tax jurisdictions.

As the law was passed, Democrats excoriated the provision as too weak to stop true profit-shifting and said it creates negative consequences for investment. Because it is calculated globally, rather than by jurisdiction, companies could still use tax havens if the income is offset by high-tax jurisdictions. And the deduction for depreciable tangible property creates an incentive for companies to move or create more real assets offshore, discouraging investment from home, they claimed.

Biden has proposed nixing the tangible asset aspect of GILTI so that it would apply to most foreign income of U.S. taxpayers. He would also calculate the rate country by country. And his tax plan would double the rate to 21% while raising the overall corporate rate to 28%.

Combined, these provisions would drastically increase the tax costs of overseas business for U.S. taxpayers, shifting the U.S. much closer to a worldwide tax system. A country-by-country calculation could also increase administrative burdens for companies, which would now see an incentive to do more cross-border tax planning for all of the jurisdictions they do business in.

But some businesses may see appealing aspects in Biden's agenda. Removing the depreciable tangible property calculation in GILTI could simplify tax reporting — while not necessarily expanding its reach that much, as many taxpayers claim it already applies to a wide host of activities beyond the exploitation of intangibles.

"These proposals assume a conclusion but invite a discussion," said Hank Gutman, of counsel at Ivins Phillips & Barker Chtd. and a former deputy tax legislative counsel in the Treasury Department Office of Tax Policy. "All of these things are placeholders."

Persuading Republicans to sign on to significant changes to the TCJA will be a steep climb for Biden, despite his experience with legislative log-rolling. There are a few opportunities for compromise. The tax rate for GILTI is set to increase from 10.5% to 13.125% in 2025, which many Republicans and business lobbies have sought to change. Some taxpayers have also seen high GILTI tax payments on income that has already been heavily taxed by foreign jurisdictions, because of foreign tax credit limitations — a result that Republican lawmakers have said was not their intention and would like to see changed. But outside observers are skeptical that the sides could come together on these issues.

"I think the international provisions are very complex and may need some reform at some point, but their complexity makes them a poor candidate for the next couple of years," said Kyle Pomerleau, a resident fellow at the American Enterprise Institute, a right-leaning research group.

As Biden tries to tackle the economic recovery and novel coronavirus pandemic, his administration may look for different approaches and more modest changes to international tax law.

Daniel Bunn, vice president of global projects at the Tax Foundation, a conservative economic research institute in Washington, D.C., said he expected the Biden administration to pursue regulatory changes to GILTI before a legislative overhaul.

"I don't see the international piece as a short-term priority, rather than what might be possible through regulatory changes," Bunn said.

Biden could order a review of regulations such as the high-tax exclusion from GILTI, which allows companies to avoid the GILTI tax on income that is taxed by a foreign jurisdiction at rates of 18.9% or higher. Critics claim the rule goes beyond what is authorized by the law.

A Return to Alternative Minimum Taxation?

Another key item in Biden's corporate tax agenda is a proposed 15% corporate minimum tax, to be levied not on a company's taxable corporate income but on the profits it reports through financial accounting.

The idea, which was also proposed by Sen. Elizabeth Warren, D-Mass., came as a response to outrage over companies such as Amazon.com Inc. reporting no tax liability despite large corporate profits for some years in filings with the U.S. Securities and Exchange Commission.

If Biden pursues the policy, he is likely to encounter heavy opposition from not only the business community but from many tax experts as well. Financial accounting standards are set by the Financial Accounting Standards Board, a nonprofit group that many see as an inappropriate body to determine the base for a federal tax. Congress is likely to balk at the prospect of yielding its constitutional power to set federal tax rules.

As a compromise, the administration could seek to reinstate the alternative corporate minimum tax, which was repealed by the TCJA. It would create a separate tax payment for some corporations, using taxable income as a starting point but nixing many deductions and making other adjustments to arrive at a separate figure.

Headaches at the OECD

The administration will also face a complex dilemma at the OECD, which is still hoping to create an agreement on digital tax issues by the end of the year.

Biden is likely to strike a conciliatory tone in international relations following the antagonistic Trump administration. But many are skeptical that he would reverse the current U.S. stance against digital services taxes, and against the OECD proposal to expand taxable nexus concepts and allow countries to tax multinational companies on some transactions regardless of physical presence.

"The U.S. Treasury under Biden would not be any more inclined than the Trump Treasury has been to give away any significant part of the U.S. corporate income tax base to other countries," said Jefferson VanderWolk, a partner at Squire Patton Boggs LLP and a former official with the OECD. "A Biden Treasury would feel just as constrained as the Trump Treasury has felt by the fact that congressional action would be needed to implement a multilateral agreement on tax nexus and the allocation of profits from cross-border business."

Biden, however, may not be as quick to turn to tariffs as a negotiating tool as Trump had been. The Office of the U.S. Trade Representative is set to enact trade sanctions in January against French handbags, makeup and other products in retaliation for the country's 3% digital services tax, which administration officials claim discriminates against U.S. technology companies.

Tax experts — and Louis Vuitton fans — are eagerly awaiting clues on how the incoming administration will handle those tariffs.

Representatives of Biden did not respond to a request for comment.