New York Gov. Andrew Cuomo said Monday that he'll push forward on legalizing and taxing recreational cannabis and sports betting but warned that increasing taxes on the wealthy wouldn't be enough to dig the state out of its budget hole. 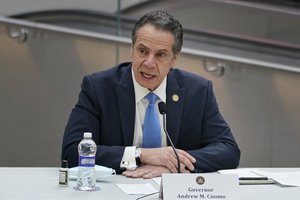 The pandemic and its economic effects are "a war, and like every war before, it must be financed by Washington," New York Gov. Andrew Cuomo said. (AP Photo/Seth Wenig)

Speaking in his first of several livestreamed State of the State speeches this week, Cuomo, a Democrat, said the state should look for new sources of revenue through the legalization of cannabis and sports betting and pushed federal leaders to repeal the $10,000 state and local tax deduction cap and provide further aid to states.

In his speech, Cuomo emphasized the federal government's role in helping close what he said is a $15 billion budget gap. While not explicitly opposing increased taxes on the wealthy, Cuomo said closing the budget gap without federal aid "would require extraordinary and negative measures." Raising income taxes to the highest in the country for those with income of $1 million or more would raise $1.5 billion, Cuomo said, while freezing planned income tax cuts on the middle class already passed into law would save the state only $500 million.

"This is a national challenge," Cuomo said. "It is a war, and like every war before, it must be financed by Washington."

While deemphasizing state increases in income taxes, Cuomo said federal leaders should consider increasing taxes on the wealthy if necessary to fight the pandemic and provide relief to states.

"That is basic economic justice and economic prudence," Cuomo said. "Look what has happened in America: The rich have gotten richer, the poor have gotten poorer and the middle class has gotten smaller."

Last week, Cuomo outlined many of the items he covered Monday, including cannabis and sports betting, though more proposals could emerge this week or when he unveils his proposed budget.

Cuomo's emphasis on cannabis and sports betting to raise revenue is a pivot from last month, when he called for a budget approach that included aid from Washington, D.C., and belt-tightening but said tax increases would be necessary to address the yawning budget gap caused in part by the novel coronavirus pandemic. In comments Dec. 9, Cuomo said he believed there was going to be a tax increase and service cuts. But that was before Democrats were expected to take over the U.S. Senate after winning both seats in Georgia this month in a runoff election, changing the dynamics on whether Congress may provide more relief to states.

Rebecca Bailin, campaign manager for the Invest in Our New York Campaign, said Monday that while Cuomo has said personal income tax increases won't raise enough money to fill the state's budget gaps, he's emphasized revenue from cannabis, which Cuomo's office has said would raise only about $300 million annually and only once fully implemented.

"That's a clear contradiction and points to his resistance to ending tax breaks on the rich to end the suffering of the millions of New Yorkers who are paying for the pandemic in budget cuts to services and mass unemployment," Bailin said.

The Invest In Our New York Campaign includes more than 100 progressive groups and several state lawmakers coming together to push state lawmakers and Cuomo to pass a package of six tax measures this year, including the expansion of taxes on capital gains, estates, billionaires, Wall Street and corporations.

Efforts in New York to legalize and tax recreational cannabis failed in 2019 after Cuomo's proposal didn't make it into the final budget. In 2020, even with Cuomo's support, legalization was overpowered by the pandemic crisis, which hit New York early and hard, prompting the Legislature to temporarily suspend its session in April. Last week Senate lawmakers reintroduced their bill to legalize adult-use cannabis, with the support of nearly a third of the chamber.

Cuomo unveiled his proposal to authorize online and mobile sports betting last week, reversing his previous position and opening the door for massive expansion of the sports betting market in one of the largest states in the country. Under the proposal, New York's gaming commission would license private sector mobile and online operators directly to grab a larger share of the gaming revenue in taxes.

The offices of legislative leaders in the state Assembly and Senate didn't immediately respond to requests for comment Monday.