A bipartisan push in Congress to ensure businesses can deduct expenses covered by Paycheck Protection Program loans has opened the door to legislation to override IRS guidance denying the deductions and make other tweaks to the recent coronavirus relief package. 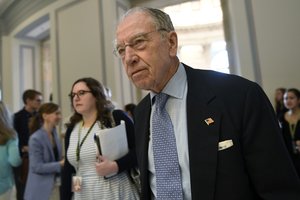 Sen. Chuck Grassley, above, said in a joint letter to Treasury Secretary Steven Mnuchin that the IRS position on the deductibility of expenses covered by Paycheck Protection Program loans went contrary to lawmakers' intent. (AP)

concluded that businesses may not take deductions for qualified expenses covered by Paycheck Protection Program loans such as wages, rent, mortgage interest, employees' health care benefits and utilities. They are among several lawmakers aiming to curb taxes on certain items in the Coronavirus Aid, Relief and Economic Security Act

enacted in March, either through revised regulatory rulings or technical corrections in new legislation.

Grassley, when asked whether he intended to try to ensure the deductibility of wages and other items covered by PPP loans, told Law360 simply, "Yes."

The top tax writer made clear he believed the IRS notice went against the intentions of lawmakers to ensure such loans give as big a boost as possible to endangered small businesses, including restaurants, retailers and manufacturers.

"The intent was to maximize small businesses' ability to maintain liquidity, retain their employees and recover from this health crisis as quickly as possible. This notice is contrary to that intent," Grassley said in a written statement.

Neal has voiced similar concerns and has made clear he will try to overrule the agency's decision.

"If Treasury doesn't reverse their position, we will fix it legislatively," a Ways and Means spokesperson said.

Grassley, Neal and Finance Committee ranking member Ron Wyden, D-Ore., fired a shot across the bow of Treasury Secretary Steven Mnuchin in a joint letter Tuesday, arguing that the IRS notice was contrary to lawmakers' intent in exempting PPP loan forgiveness from income.

"This interpretation means that whatever income a small business is able to produce will be taxed on a gross basis to the extent of the loan forgiveness, leaving substantially less after-tax capital for the swift economic recovery we hope is on the horizon," the three lawmakers said in their letter.

The letter came a day after Mnuchin said on Fox Business News that the IRS notice was consistent with standard procedures for tax administration.

"If the money that's coming is not taxable, you can't double-dip," Mnuchin said on Monday.

Treasury and IRS officials were not available immediately to comment on whether there would be a review or any changes in the IRS notice as sought by the two chairmen of the tax-writing committees.

In light of Mnuchin's defense of the IRS decision, Sen. Mike Crapo, R-Idaho, a senior member of the Finance Committee, said he believed the issue of business deductions for PPP loan recipients likely would be examined by panel members. He said he and other committee members took care to insert language in the CARES Act to exempt the government's forgiveness of PPP loans from tax when recipients meet worker-retention goals.

Now, Crapo said, they would explore whether to advance a patch to ensure small businesses receiving PPP loans can deduct wages and other expenses covered by those government funds.

"We will look at that. It wasn't part of the original law," Crapo told Law360.

The IRS notice said no deduction was allowed for "an expense that is otherwise deductible if the payment of the expense results in forgiveness" of a Paycheck Protection Program loan. Such tax treatment of business expenses covered by forgiven PPP loans "prevents a double tax benefit" consistent with Internal Revenue Code Section 265

While lawmakers explore their options for ensuring business deductions for PPP loan recipients, Rep. Nydia Velázquez, D-N.Y., has begun pushing with Democratic allies for her proposal to provide a tax exemption for expanded unemployment compensation contained in the CARES Act. The law provided an extra $600 in weekly jobless aid for unemployed and furloughed workers.

Workers typically are responsible for taxes on weekly unemployment compensation paid by states, with a withholding rate of about 10%. But Velázquez's proposal would ensure taxes are not applied to the increase in benefits under the CARES Act.

Proposals for tweaks to the CARES Act could move as stand-alone measures if there is consensus support. But such proposals also could face objections from lawmakers seeking to attach proposals for another round of economic impact payments, tax incentives for businesses and individuals, and proposals to repeal or reshape contentious parts of the CARES Act.

For example, Republicans have sharply criticized the increase in jobless aid, arguing it represents an incentive for jobless workers to continue receiving benefits rather than find new jobs. And Democrats have criticized business incentives in the CARES Act such as an allowance to carry back net operating losses arising in 2018, 2019 or 2020 for five years.

As he works with House Democratic leaders to develop the next virus relief bill, Neal has opened the door to possible technical corrections for the CARES Act, including a potential shield for certain business deductions for PPP loan recipients.

Whether such a patch moves on its own or with other, similar measures, it could face some tough questions from skeptics such as Rep. Brad Sherman, D-Calif., who said he was considering legislation to codify the conclusion of the IRS notice.

"It would be much stronger if it was in statute," he told Law360.

Sherman, an accountant, said businesses would face challenges in accounting for normally deductible expenses such as wages, since they will not know that their PPP loan has been forgiven until well after expenditures are made. But he said he believed in the principle that a deduction should not be allowed when "the money you used to pay the expense was federal money."

"You can understand both sides of the issue," Koskinen said in an email to Law360. "This is one of those questions that depends somewhat on who said what as they were negotiating the legislation and its focus. And that's something I know nothing about."

Mark Mazur, director of the Urban-Brookings Tax Policy Center and a former assistant Treasury secretary for tax policy, said Treasury and IRS officials often faced pressure from Capitol Hill to provide generous interpretations of new tax laws. But in this case, Mazur said, officials would face big challenges if they try to frame a legal justification for a different conclusion than the IRS notice.

Overall, a reversal of the IRS notice would not have a beneficial effect on tax administration, Mazur said.

"It would be a bad policy outcome. They shouldn't do it," he said.