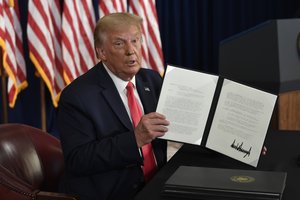 A directive to defer collection of the Social Security payroll tax was among four executive orders that President Donald Trump signed on Saturday. (AP)

House Ways and Means Chairman Richard Neal, D-Mass., took a lead role in questioning the legal authority for implementation of Trump's memorandum directing Treasury Secretary Steven Mnuchin to defer withholding, deposit and payment of the 6.2% payroll tax for Social Security levied on workers earning less than $4,000 biweekly — or $104,000 annually — from Sept. 1 through the end of December.

But Neal stopped short of saying whether Democrats would address Trump's decree with any specific legislation, and simply underscored his party's desire to move broader incentives for families with children and other priorities in a package to address the novel coronavirus, which causes the respiratory disease COVID-19. He has said House Democrats may try to put a spotlight on Trump's unilateral action by forcing a vote in September on H.R. 7499, the Social Security COVID Correction and Equity Act, proposed by Rep. John Larson, D-Conn., to help beneficiaries deal with the pandemic's effects.

"Democrats will take that, and then they will ask for more," Cornyn told Law360.

Cornyn and other Republicans also are trying to salvage their own proposals for business tax incentives in a possible pandemic response deal, including flexibility for farmers with net operating losses and refundable tax credits for businesses.

While Democrats plot legislative strategy, Jerry Cohen of Eversheds Sutherland, a former IRS chief counsel, said there was a chance Neal would summon administration officials to testify in oversight hearings on implementation of Trump's memorandum.

In addition to potential oversight hearings, Democrats may look to challenge Trump's payroll tax deferral in federal court. Regardless of whether they file suit, Cohen and Andy Grewal, a professor at the University of Iowa College of Law, said they doubted Democrats could block Trump's action.

"If they just said it's for a few months, they probably would win," Cohen said. "What they couldn't say is, 'You don't owe the taxes.'"

Grewal compared a possible Democratic lawsuit to one filed by House Republicans in 2014 to challenge both deployment of the health care overhaul's cost-sharing subsidies without congressional appropriations and a delay in enforcement of coverage mandate penalties for large employers. The lawsuit's challenge to the employer mandate was dismissed by a federal judge in 2015, and the cost-sharing subsidy issue was settled by the Trump administration in 2017.

"Who knows what would happen? It would take a long time to resolve," Grewal told Law360.

Whether a lawsuit is filed or not, some tax experts said employers would face tough decisions on whether to temporarily stop deducting payroll taxes from employees' wages in the midst of legal questions about Trump's authority and without a framework for remitting deferred levies to the IRS. By contrast, the Coronavirus Aid, Relief and Economic Security Act contained an allowance for businesses to defer their share of Social Security payroll tax — 6.2% of wages — for 2020, and required these levies to be paid in two equal installments due by year's end in 2021 and in 2022.

John Koskinen, a former Internal Revenue Service commissioner, told Law360 in an email he was "not sure that the president has the power to unwind a tax passed by the Congress" and said employers would play a key role in carrying out Trump's order.

"The challenges would be for employers to reprogram their systems to avoid withholding the tax," Koskinen said.

Grewal said some businesses might opt to simply keep deducting employees' share of payroll taxes because they "can't bank on never having to withhold payroll taxes when there's so much political uncertainty."

For his part, Trump vowed Saturday to make sure employees' deferred payroll taxes were never collected.

"I plan to forgive these and make permanent cuts to the payroll tax," Trump said.

In a news conference, he also voiced confidence his order would attract public support.

"If we get sued, it's somebody that doesn't want people to get the money," Trump said. "That's not going to be a very popular thing."

While Democrats weigh a legal challenge, they also are hunting for other ways to uproot Trump's order.

Sen. Chris Coons, D-Del., ranking member on the Senate Appropriations subcommittee responsible for the Internal Revenue Service budget, said he and other Democrats would explore a rider to bar the IRS and other agencies from using federal funding to implement Trump's executive order.

He made clear that a discussion of any IRS role in the implementation of Trump's order could have a bearing on decisions made on the agency's funding.

"The idea of a payroll tax cut has been roundly rejected by Democrats and Republicans," Coons told Law360. "We should look at whether there is a legislative vehicle that would prevent an ill-considered act by the president."

Republicans had muted responses, for the most part, to Trump's order. Senate Finance Chairman Chuck Grassley, R-Iowa, has voiced skepticism about whether Trump's payroll tax move would have much economic impact.

"For tax policy to make a big difference, it's got to be long term," Grassley told reporters last week.

But Grassley and other senior Republicans took a neutral stance on questions about the scope of Trump's authority to engineer a payroll tax deferral.

Sen. Ben Sasse, R-Neb., was one of the few Republicans to criticize Trump's memorandum. He said in a written statement that Trump cannot "unilaterally rewrite the payroll tax law" and that such power "belongs to the American people acting through their members of Congress."

Many Republican senators did not support Trump's proposal for a payroll tax holiday, and pointedly left it out of the $1 trillion Senate GOP pandemic blueprint called the Health, Economic Assistance, Liability Protection and Schools Act. But it remains unclear whether any Republicans in either chamber will be willing to buck Trump and join Democrats in challenging his directive with legislative or legal action.

Sen. Bill Cassidy, R-La., said he was told by a business constituent that Trump's payroll tax deferral would be useful.

"He told me it would help them with their cash flow," Cassidy told Law360.

While not opposing Trump's payroll tax deferral, Cassidy also said he believed lawmakers would need to discuss Social Security's financial woes and explore whether payroll revenue diverted from the Social Security trust fund would be replaced by general revenue.

"You have to hope there would be a backfill," Cassidy said.