The president disclosed that he and the first lady had tested positive and planned to quarantine in a tweet about 1 a.m. Friday, less than six days after a White House event to announce Judge Barrett's nomination. At least seven attendees have tested positive since then.

Photographs from event show Trump and other people who have tested positive near Judge Barrett without a mask, both during the outdoor announcement and while mingling indoors. She has not been with the president since then, a White House spokesman said, but she met with senators who later tested positive. 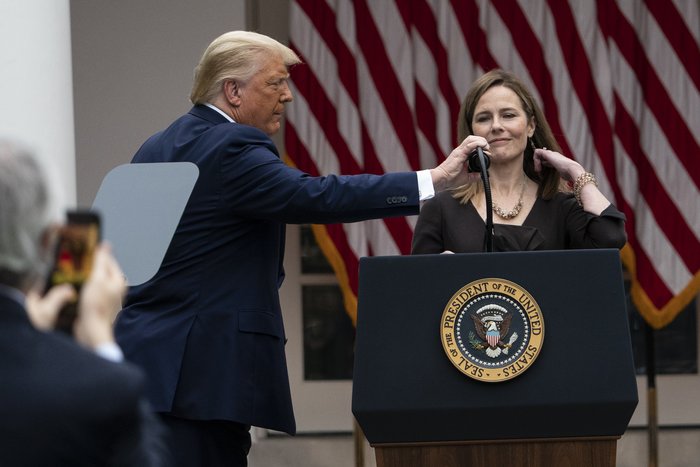 "I talked to President Trump this morning," Graham told CNN on Friday morning. "The first thing he asked me is, 'How's the hearings going?' I said we're on track. We're going to start October the 12th. ... And we're going to work hard to get this wonderful conservative young lady talented beyond belief, Amy Barrett, on the Supreme Court."

"We're going to have a hearing," Graham said Saturday during a debate with his Democratic challenger, Jaime Harrison. "It will be done safely — but I've got a job to do, and I'm pressing on."

The hearings are not in danger even if some Republicans cannot appear in person; the committee's quorum rules only require a single senator present "for the purpose of taking down sworn testimony."

However, the GOP could run into trouble if multiple members cannot physically attend the committee vote expected Oct. 22 and the final floor vote the following week.

"I think we can move forward," he said Friday morning. "Our biggest enemy, obviously, is ... the coronavirus, keeping everybody healthy and well and in place to do our job."

On Saturday, McConnell scrapped plans to have the Senate in session and voting to confirm judges for the next two weeks. A Judiciary Committee spokeswoman quickly noted that the chamber's rules allow committees to meet out of session and vowed "no change" to the schedule.

Judge Barrett had spent much of the past week meeting indoors with more than 30 senators, accompanied by top administration officials who are often near the president, including Vice President Mike Pence, whose spokesman said he tested negative Friday morning. 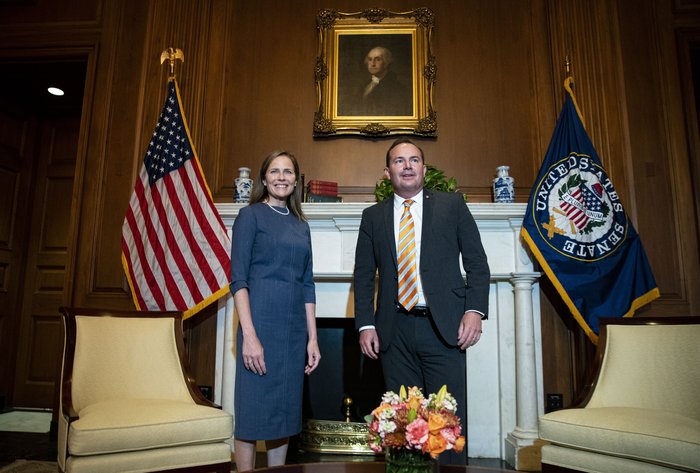 On Tuesday, the nominee met with Sen. Mike Lee, R-Utah. Photographs showed they briefly stood close together without masks Tuesday after chatting within arm's reach at the White House event a few days earlier.

Lee said Friday that he tested positive the previous day after experiencing allergy-like symptoms. The Judiciary Committee member said in a statement that he would work from home for 10 days — meaning he will return to the Senate for the first day of Judge Barrett's confirmation hearings Oct. 12.

On Wednesday, the judge met with Sen. Thom Tillis of North Carolina, another Judiciary Committee Republican. Tillis said late Friday that he, too, had tested positive and would quarantine for 10 days.

Tillis and Lee both attended the White House announcement event, where video showed Lee shaking hands and hugging multiple people without masks and a photograph showed Tillis sitting indoors next to one of Judge Barrett's children and chatting without a mask.

Two other Judiciary Committee Republicans, Ben Sasse of Nebraska and Ted Cruz of Texas, said over the weekend that they will quarantine, as has another GOP senator not on the committee, James Lankford of Oklahoma.

It is not yet clear whether Judge Barrett will quarantine. The White House spokesman did not address the question Friday.

Public health experts recommend a two-week quarantine after possible exposure. There could be concern even when people are frequently tested; rapid antigen tests are less sensitive than molecular tests whose results may take several days, meaning the faster tests have a higher chance of false negative results, according to Harvard Medical School.

The judge was diagnosed with the coronavirus this summer and tested positive but has since recovered, the Washington Post reported Friday, citing "three officials familiar with her diagnosis." Scientists say past infection likely provides some immunity but don't know to what degree or for how long, according to Johns Hopkins University's Bloomberg School of Public Health.

After several days of meeting Republican senators, the judge had her first meeting with a Democrat on Thursday — Sen. Joe Manchin of West Virginia, the only Democrat who voted to confirm Justice Brett Kavanaugh in 2018. Manchin has said he will vote against Judge Barrett's confirmation because of the proximity to the election.

McConnell needs Republican senators healthy and available for Judge Barrett's confirmation vote, which is currently expected the week of Oct. 26. Unlike the White House, Congress does not have widespread preventive coronavirus testing.

"Every precaution needs to be taken, because we don't anticipate any Democratic support at all, either in committee or in the full Senate," he said in the radio interview. "Everybody needs to be in an all-hands-on-deck mindset."

McConnell did not address a question about the possibility of remote confirmation hearings for Judge Barrett, a scenario top Democrats rejected.

"A virtual confirmation hearing for a lifetime appointment to the federal bench is not an acceptable substitute," they said in a joint statement Friday. "Health and safety must guide the schedule for all Senate activities, including hearings. ... Otherwise this already illegitimate process will become a dangerous one."

In recent months, the Judiciary Committee held several confirmation hearings where district court nominees and some senators appeared by videoconference. The only two appeals court candidates who had hearings this year both appeared in person in May.

McConnell also said he hopes to fill Judge Barrett's seat on the Seventh Circuit if she joins the high court, reiterating his promise to "leave no vacancy behind."

The majority leader has not explicitly said Judge Barrett will get confirmed before Election Day, but on Friday in Kentucky he said he was "planning on moving to the nomination as soon as it comes out of committee," which Graham forecasts between Oct. 22 and Oct. 26.

It would be the fastest Supreme Court confirmation process since 1981 if the final vote comes before Nov. 3.

If it doesn't, McConnell suggested he would seek to approve Judge Barrett during the lame-duck session regardless of the election's outcome.

Sen. Susan Collins of Maine is the only Republican to say she'll vote against confirmation if the vote comes before Nov. 3, arguing it is too close to the election after the Senate GOP refused to consider President Barack Obama's selection following Justice Antonin Scalia's death in February 2016.

McConnell says the difference now is the same party controls the Senate and the White House.