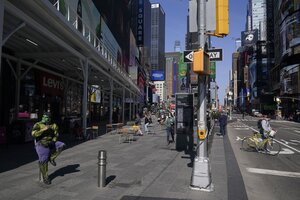 Mark Klein, chairman and partner of Hodgson Russ LLP, told Law360 that his firm has seen a large number of clients receive questionnaires sent by the New York State Department of Taxation and Finance related to changes in residence or telecommuting and in connection to return processing. Because they're generally related to the 2020 tax year, he said that means they're being sent out within weeks of people filing their returns.

Klein said his firm is seeing a "very high percentage" of people who are telecommuting from outside of New York and who didn't commute historically.

"Keep in mind 99% of people haven't filed their tax return for last year. So very few people are filing so far, and of the very few we're finding a large percentage are getting these letters," Klein said.

The letters are being sent as the pandemic has disrupted work patterns nationally, causing many people to work remotely from home, outside of their home states or move away completely. The notices were first reported by the Wall Street Journal.

Two new request-for-information letters have been created for the 2020 tax year, according to the department website. One of the letters, shared with Law360, asks a taxpayer to verify the amount of income allocated to New York state by May 20. The letter tells the taxpayer that if they're a nonresident or part-year resident whose assigned primary work location is in New York, days they worked outside the state may be considered New York state work days. The letter also includes an income allocation questionnaire for taxpayers to fill out.

"In particular, days you telecommuted from a location outside New York state are considered New York state work days unless your employer has established a bona fide employer office at your telecommuting location," the letter said.

Requests for information aren't necessarily audits. Generally after an initial review by the tax department, a question may arise and the department may send a request for information. If a taxpayer provides supporting information needed under the law, the issue can be resolved.

Darren Dopp, a spokesman for the New York State Department of Taxation and Finance, told Law360 that the state's policy isn't new but the same practice used since 2006. That policy says taxpayers who work for a New York employer and allocate income to an out-of-state location should be prepared to explain and substantiate how their employer established a bona fide employer office at the out-of-state location.

Dopp said the state is in the peak of filing season, with two weeks to go and millions of returns that will come in until May 17.

In October, the state tax department said in long-anticipated guidance that New York nonresidents working outside the state during the pandemic, but for a New York business, may still owe income tax to New York on income earned while telecommuting.

The guidance noted 2006 guidance that interpreted regulations governing the "convenience of the employer test" for telecommuters to help understand whether an employer has set up a bona fide office at a telecommuting location. The notice also laid out factors to test whether the office counts as an office.

Klein said New York treats wages of those working outside of New York but for New York businesses as New York wages if they're working there under the convenience of the employer, as opposed to necessity.

The test, which observers anticipated would become an issue, has been upheld by the state's highest court, he said. But last year when Democratic Gov. Andrew Cuomo and New York City Mayor Bill de Blasio ordered people to stay home because of the pandemic, considerations changed, Klein said.

"So if your office was closed and you were working at home in New Jersey, do you really think you were working there for your own convenience?" Klein asked. "One could suggest it was necessity. I certainly would."

Another letter being sent out by the department looks to verify residency status for those domiciled in New York or who had a permanent abode in the state while spending 184 days or more in New York.

Elizabeth Pascal, a partner with Hodgson Russ, said many people don't know the rules of domicile, which say New York domicile continues until a person demonstrates intent with clear and convincing evidence to not only abandon their New York domicile but to establish a new one with the intent to remain there indefinitely.

"I think the tax department expects, probably rightfully, that many people terminated leases in N.Y. or weren't in the state for more than 183 days and therefore think they won't be treated as N.Y. residents after they left," Pascal said. "They don't understand this domicile test, or realize you have to 'stick the landing' in the new location, and demonstrate that you have the intent to remain there indefinitely."