Should An Atty Lead HHS? Lawmakers Debate Pros And Cons

U.S. senators diverged Tuesday over the California attorney general's qualifications to lead the U.S. Department of Health and Human Services, with critics questioning the nominee's health care credentials and supporters emphasizing his penchant for suing hospitals and drugmakers over controversial pricing practices. 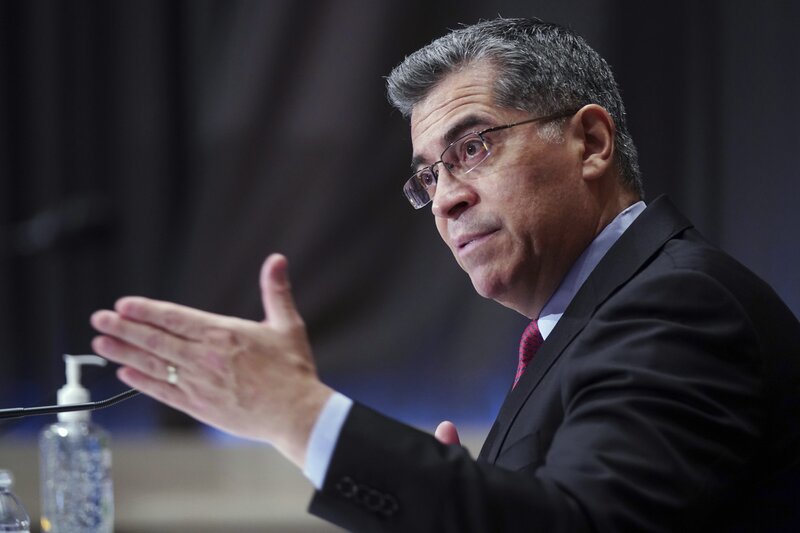 Xavier Becerra speaks during his confirmation hearing to be secretary of Health and Human Services before the Senate Health, Education, Labor and Pensions Committee on Feb. 23, 2021. (Leigh Vogel/Pool via AP)

The divisions appeared throughout a Senate health committee hearing on President Joe Biden's nomination of Golden State Attorney General Xavier Becerra as secretary of HHS, a vast agency that spends more than $1 trillion annually and runs much of the federal government's response to the coronavirus pandemic.

"As the attorney general sits before us, I'll say what I've said to him privately: I'm not sold yet," Sen. Richard Burr, R-N.C., the Committee on Health, Education, Labor and Pensions' ranking member, said near the start of Tuesday's hearing. "I'm not sure that you have the necessary skills or experience to do this job at this moment."

Sen. Bill Cassidy, R-La., a gastroenterologist, made a similar point, saying that Becerra is "a very highly trained attorney" but not necessarily a good fit to oversee the federal government's sprawling health care operations.

"What would you, as the attorney, think if I, the physician, were nominated to be the United States attorney general?" Cassidy asked. "You would say, 'The guy's not qualified. Maybe HHS secretary ... but certainly not attorney general.'"

Former President Donald Trump's HHS secretaries included Tom Price, who has a medical degree, and Alex Azar, who once practiced law and had a long business career in the pharmaceutical industry. Former President Barack Obama's HHS secretaries included Kathleen Sebelius, a onetime governor and insurance commissioner, and Sylvia Mathews Burwell, who had led the White House's Office of Management and Budget.

Becerra, who served 12 terms in Congress and became California's attorney general in 2017, appeared to anticipate scrutiny of his professional talents. In an opening statement, he referenced his office's wide-ranging enforcement involving health care, averring that he has "protected patients' privacy," sought to "hold opioid manufacturers accountable for the addiction crisis," targeted "hospitals and drugmakers who unfairly jack up prices on patients," and "cracked down on Medicare and Medicaid fraud."

Republicans, who cannot block Becerra's confirmation if the Democratic majority stays united, have for weeks hammered home the fact that a juris doctor doesn't involve the practice of medicine. And they have tried to undercut Becerra's enforcement resume by singling out his litigation against the Trump administration's religious exemptions for employers opposed to covering birth control.

"Mr. Becerra has no particular experience or expertise in health," Sen. Mitch McConnell, R-Ky., said Tuesday on the Senate floor. "His chief passion project in California seemed to be using the force of the government to attack Americans' religious liberty and freedom of conscience."

To counter that line of attack, Democrats have spotlighted Becerra's larger docket of health care litigation. That litigation has often focused on competition concerns: The attorney general reached a $575 million antitrust settlement over alleged hospital price-gouging, inked eight-figure settlements over "pay-for-delay" deals between brand-name and generic-drug makers, and successfully defended California's ban on most pay-for-delay deals.

Most prominently, Becerra's office has led the fight against a Republican-backed lawsuit — currently awaiting a decision from the U.S. Supreme Court — aimed at invalidating the entire Affordable Care Act.

"Your record standing up to price-gouging by large hospital chains, taking on the big opioid manufacturers [and] defending the health care for millions of Americans is a record of accomplishment that I think qualifies you so well for this position," Sen. Tina Smith, D-Minn., said at Tuesday's hearing.

Democrats have also contended that Becerra's stewardship of the California Department of Justice, which has 4,500 employees, shows he has the management chops for HHS, which has 80,000 employees.

"We believe this positions him well to successfully lead the Department of Health and Human Services," Sen. Dianne Feinstein, D-Calif., said when introducing Becerra at Tuesday's two-and-a-half-hour session.

But even if Becerra can effectively steer a massive government agency, not everyone is convinced he will do so responsibly. Burr on Tuesday recalled Becerra joining dozens of congressional colleagues in 2016 in calling on HHS to invoke the Bayh-Dole Act in order to lower prices for patent-protected drugs developed based on taxpayer-funded research.

"An HHS secretary nominee that has demanded manufacturers hand over protections for their innovations, and discouraged the development of treatments for life-threatening diseases, should be cause for concern for all members of the Senate," Burr said.

Becerra has received endorsements from influential health care groups, including the American Hospital Association and the American Medical Association. The pharmaceutical industry hasn't been as enthusiastic, and some progressive groups have accused drug companies of bankrolling opposition from conservative activists.

One glimpse into the underpinnings of that split between health care providers and drugmakers occurred Tuesday during discussion of the so-called 340B program, which requires drugmakers to provide hefty discounts to providers in lower-income areas. Drugmakers have long accused providers of abusing the program, and they have recently launched a flurry of lawsuits aimed at dialing back their discount obligations.

Cassidy on Tuesday pressed Becerra on whether Congress should define key terms in 340B, which could curtail its value for providers. Becerra signaled resistance, calling 340B "an indispensable program" and declaring that "it was only recently that we had an issue arise from the drugmakers saying that they want to change the way it operates."

Both Cassidy and Burr professed to have an "open mind" about ultimately supporting Becerra. Several other Republican senators who questioned Becerra didn't clearly indicate how they might vote, and they focused largely on how the nominee might approach rural health care.

As one example, Sen. Tommy Tuberville, R-Ala., quizzed Becerra about the role of pharmacy benefit managers in paying mom-and-pop pharmacies less than chain drugstores and arguably forcing them out of business.

"Rural pharmacies, especially in the state of Alabama, they're like hospitals, they're like doctors' offices," Tuberville told the nominee. "We're losing some of them because of PBMs."

Becerra responded by saying that PBMs "play an indispensable part" in America's pharmacy system, but that "the role can't be to just be [a] middleman and gouge the price."

Becerra's nomination is set for additional consideration in a hearing Wednesday afternoon before the Senate Finance Committee.