The dust is settling on the recent wave of high-profile workplace activism that some in organized labor called Striketober, but this spike in activity may have a long reach as it prompts more union-represented workers to take aggressive stances against employers, experts say. 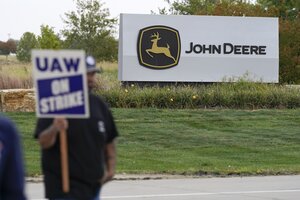 A recent strike at John Deere was part of a wave of high-profile workplace activism that kicked off last month. (AP Photo/Charlie Neibergall)

Unions representing tens of thousands of workers from John Deere, Kaiser Permanente, Harvard University, and the film and TV industry have reached or approved deals in recent weeks after threatening or mounting strikes. While these actions yielded a mixed bag of results for the workers involved, the attention they've drawn to organized labor's most potent weapon is liable to spark more strike activity.

"It's not a question so much of what was actually won," said Nelson Lichtenstein, a labor historian with the University of California, Santa Barbara. "It's the fact that they're doing it at all."

The action kicked off at the start of last month, when the International Alliance of Theatrical Stage Employees held a strike authorization vote after talks stalled with a production company coalition on a contract covering nearly 60,000 television and movie production workers.

The union faulted the coalition for failing to cede ground ahead of the vote on "grievous problems," including long hours, minimal rest during and between shifts, and workers' cut of profits on streaming projects. Ultimately, just under 99% of the more than 53,000 workers who voted opted to authorize what would have been the first strike in IATSE's 128-year history.

Several units from a union coalition representing about 54,000 Kaiser Permanente workers nationwide voted to authorize strikes in a series of votes throughout October after the company insisted on a new deal to pay future workers less than existing members, which are provisions that unions uniformly oppose. About 10,000 John Deere workers struck mid-month, demanding a greater share of the tractor maker's surging profits, and graduate student workers in a 4,500-member unit at Harvard University staged a three-day stoppage late in the month amid talks on a successor to a one-year deal they inked last year.

While specific demands and conditions on the ground differed among these and other units that undertook or authorized strikes last month, these actions came against a backdrop of changing conditions across the labor market as a result of the COVID-19 pandemic, labor observers say.

"It's a lot of changes in bargaining power and perceived bargaining power," said Hugh Murray, a McCarter & English LLP partner who advises employers on their union dealings."It's not a business-as-usual situation. In lots of industries, there's a lot of upheaval and a sense that people feel like, 'I don't have to stay at this job.'"

The pandemic has also instilled in front-line workers a "sense of moral righteousness" in standing up for a more favorable deal, Lichtenstein added.

The idea that workers deserved more was a big factor in the decision by union leadership to call for strike votes at Kaiser Permanente, said Charmaine Morales, executive vice president of the United Nurses Associations of California/Union of Health Care Professionals, one of several unions that comprise the Alliance of Health Care Unions. Still, it wasn't an easy call to make, she said.

"It always is the last resort for any union, for you to pull that trigger to say, 'This is bad; this is what we have to do,'" Morales said, adding that the fact that a strike would impact patient care also weighed on the decision.

Along with a rally, the strike votes were successful in getting management to budge, Morales said: Key Kaiser leaders came to the table following these actions, whereas previously the company's negotiators were a step removed from decision-makers. The parties reached a tentative agreement Nov. 13 that eliminated the proposed lower pay tier, averting a strike pending ratification. Voting on the agreement is ongoing.

In a rare move, John Deere workers voted down two tentative agreements to remain on strike before ultimately approving a deal that includes $8,500 signing bonuses and substantial raises up front and for the lifetime of the contract. The deal also narrowed a benefits gap between workers who joined before and after 1997, but did not close it.

The strike activity wasn't as successful on key demands of the Harvard graduate students and the IATSE technicians. At Harvard, workers are voting on a deal that includes higher raises than the school offered prior to the strike, but lacks a "union security" clause mandating dues as a condition of employment and arbitration for harassment and discrimination claims, which the workers had sought. IATSE workers narrowly approved a deal that includes some pay raises and provides more buffer time between shifts, but not as much as some members had wanted.

Rebecca Givan, a professor of labor studies and employment relations at Rutgers University, said these results — including the narrow approval at IATSE and initial rejections at John Deere — show that in this climate, workers aren't necessarily in lockstep with union leaders on what suffices a good deal.

"Many of the members said, 'This is not good enough,'" Givan said. "When workers get organized and start demanding more, that's serious, and they're going to hold both employer and union leadership to account."

One of the first steps employers generally take ahead of contract bargaining is to draft a strike plan. A decade ago, when work stoppages were minimal, this process was more a formality than a serious venture, he said. But it has been more important since 2018, when the U.S. Department of Labor charted more work stoppages than in any year since 1986.

The discontent with parts of these recent deals — and the reality that strikes often cost workers and employers alike — may temper somewhat any enthusiasm for striking that the attention has sparked, Murray said. But employers shouldn't count on that, he added.

"The idea that a bunch of bargaining units had to go on strike and did go on strike, and some didn't get what they wanted, I think should make everyone very realistic and come to the bargaining table," Murray said. "But human nature is strange."