How FLSA Can Change To Meet Modern Work And COVID-19

The Depression-era Fair Labor Standards Act was in need of reform to better reflect the realities of the modern workforce even before the COVID-19 pandemic upended how workers and businesses operate, attorneys say, and now it must grapple not only with the ever-evolving nature of work but also work-from-home complications. 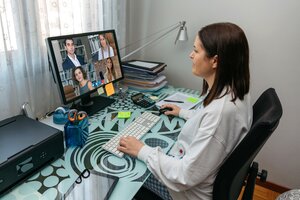 The prevalence of remote work during the pandemic and the growing recognition that workers must balance job duties with caregiving responsibilities means the standard eight-hour workday needs rethinking, attorneys say. (iStockPhoto/doble-d)

The fact that one of the key interpretations of the FLSA's workday is "from whistle to whistle" shows how the law was drafted with a different workplace and worker in mind, said Kevin Young, a partner with management-side firm Seyfarth Shaw LLP in Atlanta.

"The underlying text of the law still envisions a workplace that's worlds away from the one that's rapidly evolved in recent years, not just since the start of the pandemic, but especially since then," he said. "A symptom of the antiquity of the law and the need for modernization is the continued … torrent of wage and hour litigation."

Here, Law360 explores how the FLSA could be updated to reflect the workforce of 2022.

Although remote work is not a new phenomenon, its prevalence during the pandemic and the growing recognition that workers must balance job duties with caregiving responsibilities means the standard eight-hour workday needs rethinking, attorneys say.

The continuous workday doctrine stipulates that the workday begins with the first main job activity and ends with the last, with everything in between save for meal breaks being compensable.

But the ability to do work from home has changed those calculations, because workers can potentially check their email in the morning — the start of the workday — then go to the gym and do house chores or run errands, Etter said.

To account for this back-and-forth between work and non-work, we should eliminate the presumption that everything that follows the initial job task is part of the compensable workday, Etter said.

"The presumption is because we have a record of you starting the day, that they were working," he said. "If you remove the presumption then we can analyze whatever records there are and make an argument, 'did the person work or didn't they?'"

Scheduling flexibility is another area ripe for reform, and some changes can be made even within the constructs of the FLSA, said Sarah Arendt, a partner with worker-side firm Werman Salas PC in Chicago.

"The FLSA doesn't mandate a 9-to-5 daily work schedule," she said.

Employers can engage with their employees to figure out flexible arrangements that still abide by the 40-hour workweek model, such as compressing the workweek to four 10-hour days or dividing up the workday to accommodate other responsibilities.

The FLSA also does not offer scheduling protections in the way that so-called fair workweek laws that states and cities have established, Arendt said.

The FLSA could contemplate such protections, she said, so that, for example, parents can plan in advance for child care needs.

The FLSA provides for exemptions to its overtime requirements if the job at hand involves certain duties and meets a minimum salary threshold. But some of those exemptions are out of step with what a particular job involves in a technologically advanced and pandemic-plagued society, attorneys say.

The FLSA's outside sales exemption, for example, requires that the employee "is customarily and regularly engaged away from the employer's place or places of business in performing such primary duty."

But the pandemic forced many salespeople to work from home, potentially affecting their exempt status, even though they performed the same type of work, Seyfarth's Young said.

"What happened is a lot of these employees accustomed to knocking on doors instead did Zoom calls," Young said. "I think a real question as a matter of policy is: Should those workers lose their exempt status simply because where they're conducting their work has changed?"

In its regulatory agenda, the U.S. Department of Labor in December said it plans to change the salary-level threshold for exempt employees this year.

The Obama administration unsuccessfully tried to increase the threshold from $455 a week to $913 per week, and in 2020 a Trump administration rule went into effect upping the salary minimum to $684 per week.

The exempt versus nonexempt determination should be based primarily on a dollar figure, said Etter, eliminating the duties tests for the professional exemptions.

"A lot of the problem is for employers, if there's gray area, my advice typically is to go the way of making them nonexempt because litigation is so expensive," he said. "If it's dollar-based, now, you've made it objective, it's a completely objective test and that's really the value of it."

Arendt said the salary threshold for the white collar exemptions should be increased to bring more people under the purview of the FLSA's overtime protections.

Another way to bolster the FLSA's existing exemptions would be to clarify the duties tests by, for example, adopting California's approach to white collar exemptions, Arendt said. In the Golden State, workers are overtime-exempt if they spend more than 50% of their time on the primary duties required of the specific exemption.

"I don't think that the answer is scrapping what we currently have," she said. "If anything, it's strengthening the statutory scheme that we already have."

One of the major wage and hour developments of the Biden administration is the update to the tipped credit rule, which further limited the situations in which an employer can pay workers the subminimum tipped wage.

Under the federal wage law, tipped workers can earn as little as $2.13 per hour as long as tips carry the worker to the standard federal minimum wage, which is $7.25.

To achieve that, the administration's rule codified the 80-20 principle, which requires employers to pay full minimum wage to a tipped worker who spends more than 20% of the workweek on tasks not directly engaged in tip-producing work. Employers must also pay full minimum wage to tipped workers once they spend more than 30 minutes of uninterrupted time on tip-supporting work.

Nevertheless, Arendt said the tipped credit should be eliminated so that no worker is making less than minimum wage.

COVID-19 has brought the issues with the subminimum tipped wages into sharper relief, Arendt said, as the restaurant and hospitality industries have had to weather lockdowns and workers have faced increased harassment.

"I certainly heard stories and reporting about people saying, 'Well, take your mask off so I know how much to tip you,'" she said. "No one should be subjected to making less money because of choosing to follow the rules and protect their health and keep their mask on."

The sudden shift to work-from-home practices during the pandemic has forced employers to wrestle with never-before-contemplated wage and hour questions, particularly about which laws apply to employees working and living in various jurisdictions.

A potential consequence of this new reality is that businesses might forum shop to hire employees in jurisdictions with employer-friendly laws, Etter said.

Another issue concerns travel time. Generally under the FLSA, as amended by the Portal to Portal Act in 1947, an employee's commute to and from work is not compensable. The pandemic has challenged that longstanding principle, however, because many employees are now full-time remote workers.

An area of the law that needs to be teased out is when a worker has opted to work from home full-time, for example, but is required to travel to the office for a meeting once in a while, Young said.

"Do you say well, look, their normal workplace now is the home such that any travel away from the home is beyond their normal and is not part of normal commute and needs to be compensated," he said.

It ultimately comes down to reforming an antiquated law to reflect modern workplace conditions, Young said.

"I think where employers and employees and their advocates all agree is that clarity helps. Simplification helps," he said. "You can assure yourself more effectively of decisions that are clear and defensible and predictable within the text of the law."

Enter your details below and select your area(s) of interest to receive Law360 Employment Authority daily newsletters and section features.