5 Breyer Opinions You Need To Know

Justice Stephen Breyer had two terms under his belt when Carolyn Shapiro began clerking for him in 1996, but because he is a person who "thinks by talking out loud," she said, she knows what he was wrestling with in those early days: how to approach his work on the U.S. Supreme Court.

"He was extraordinarily thoughtful and intentional about how to be a justice," said Shapiro, now a law professor and co-director of the Institute on the Supreme Court of the United States at Chicago-Kent College of Law. 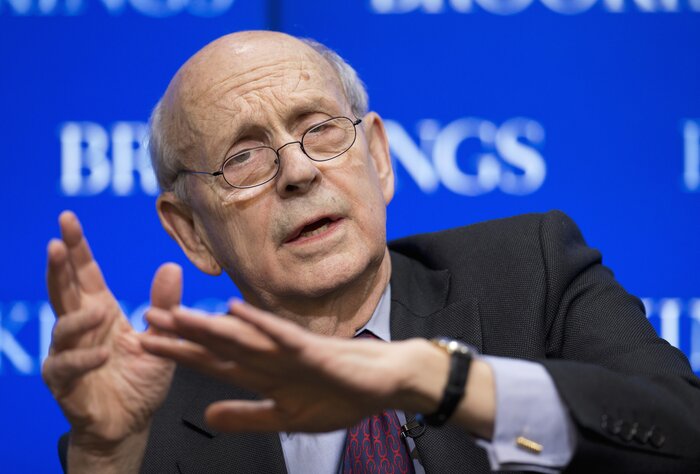 Justice Breyer, who was confirmed Wednesday to be stepping down from the court after 27 years, soon figured out his credo. He was a pragmatist who thought about the real-world implications of the high court's decisions.

"He has an incredible commitment to a functioning government and a functioning democracy," Shapiro said. "An enormous part of his pragmatism and his commitment to looking at the purpose and consequences of the law has to do with his belief in the need for democratic accountability. The court's job is not to allow obfuscation or create confusion."

Because of his consideration of the real-world, modern consequences of the law, Justice Breyer was often seen as a foil to Justice Antonin Scalia, who believed in sticking to the original intent of the Constitution. The two served together on the high court from Justice Breyer's appointment in 1994 until Justice Scalia's death in 2016.

"Justice Breyer is someone who intellectually went toe-to-toe with Scalia, but did so with a very different approach in substance and style," he said. "In many ways, Justice Breyer's judicial philosophy is more nuanced, and so it's harder to describe in a pithy way like 'originalism' or 'strict constructionalism.' He's trying to maximize the workings of democratic principles, and that's harder to boil down to one or two lines."

Here, Law360 looks at some opinions and dissents that epitomize Justice Breyer's career.

Breyer went through a detailed accounting of the medical options available to women seeking an abortion, acknowledging this "may seem clinically cold or callous to some, perhaps horrifying to others." His analysis showed that the abortion method outlawed by Nebraska's law was less risky and invasive than other options.

Shapiro said this decision, and others like it — including the 2016 case Whole Woman's Health v. Hellerstedt

— showcased Breyer's ability to stay grounded in the real world.

"He's written in favor of women's rights to access to reproductive health care, and specifically abortion, very consistently throughout his time on the bench," she said. "It's not a theoretical opinion, it's about the facts. It's about the record."

Those facts were neatly encapsulated at the end of his opinion, where he summarized the real-world effect of the law, which made a felony of "the most commonly used method for performing previability second-trimester abortions."

"All those who perform abortion procedures using that method must fear prosecution, conviction and imprisonment," he wrote. "The result is an undue burden upon a woman's right to make an abortion decision."

In this case, a group of voters asked the Federal Election Commission to gather contribution and expenditure data about the American Israel Public Affairs Committee, arguing that because the committee spent money advocating for political candidates, it fell within the FEC's purview. The FEC disagreed, saying AIPAC didn't fall within the bounds of a "political committee." The voters sued over the decision.

By the time the case reached the high court, the question became whether the voters had legal standing to sue, and whether they could allege some form of injury even if they were right that the FEC and AIPAC were flouting the law.

Breyer, writing for the majority, said they could. Not only did the language of the Federal Election Campaign Act say that any person who thought the statute had been violated could file a complaint with the FEC and appeal to a federal court, but there was a real injury to voters if they couldn't get information on the organizations bankrolling a candidate, Justice Breyer wrote.

"There is no reason to doubt their claim that the information would help them (and others to whom they would communicate it) to evaluate candidates for public office, especially candidates who received assistance from AIPAC, and to evaluate the role that AIPAC's financial assistance might play in a specific election," he wrote. "Respondents' injury consequently seems concrete and particular."

That was an unusual form of injury, Shapiro said, but it was carefully reasoned.

"He really ties the functioning of the law and the purpose of the law — which is to ensure these types of information [are available] to the public — to the analysis," she said.

Teenagers within the district could apply to attend whatever high school they liked. When a school became overenrolled, it used several factors to determine which students would attend, including race. Schools strove to maintain a diversity split — 60% students of color to 40% white students — that reflected the overall student population in the district. A group of parents challenged the practice, saying it was discriminatory, and the court's majority agreed.

But Justice Breyer said the majority was using an "overly theoretical approach to case law" in an attempt to "mask the radical nature of [its] decision." He said the Seattle school district's policy was only seeking to comply with the court's 1954 decision in Brown v. Board of Education

, which found the racial segregation of public schools was unconstitutional.

"Since this court's decision in Brown, the law has consistently and unequivocally approved of both voluntary and compulsory race-conscious measures to combat segregated schools," he said in his dissent. "The equal protection clause, ratified following the Civil War, has always distinguished in practice between state action that excludes and thereby subordinates racial minorities and state action that seeks to bring together people of all races."

Shah called this "a pretty passionate dissent" by Justice Breyer's standards. The jurist was frustrated that the majority had used the 14th Amendment as an excuse to undermine Brown, a decision that was meant to protect it.

"His reasoning was these are practical measures you need in order to make our democracy work and to fulfill the constitutional promise of Brown v. Board and equal protection. Without these measures, you're going to have the resegregation of schools that Brown was trying to fight," Shah said.

Justice Breyer also authored a unanimous decision finding that President Barack Obama lacked the authority to make three appointments to the National Labor Relations Board under the recess appointments clause. The court ruled the clause didn't apply, finding the Senate was not technically in recess because it was still holding pro forma sessions at the time.

The recess appointments clause didn't define how long the Senate could refrain from meeting before it could be considered "in recess," Justice Breyer wrote, and that was likely because the Constitution's framers didn't anticipate the modern congressional calendar.

So the majority turned to historical precedent and settled on a 10-day minimum.

"Though Congress has taken short breaks for almost 200 years, and there have been many thousands of recess appointments in that time, we have not found a single example of a recess appointment made during an intrasession recess that was shorter than 10 days. Nor has the solicitor general," Justice Breyer wrote.

Justice Scalia, in a concurring opinion, worried that allowing the president to make recess appointments during a break in a session would allow for "unilateral appointments every time the Senate takes a half-hour lunch break," but Justice Breyer refused to go as far as to say that the recess appointments clause could apply only during an official recess of the Senate.

"Justice Breyer said, 'Look, we don't want to artificially constrain the president from making recess appointments because they're often necessary for the government to work well.' There isn't a reason to construe it in such a narrow way that would deprive the president of the ability to make the government function better," Shah said. "He relies heavily on the practical purpose and the history underlying that."

This case asked a narrow question: whether the use of a lethal injection cocktail on a person sentenced to death violated the Eighth Amendment because there was some evidence that the drugs would cause severe pain.

The majority found that the use of the injection drug did not violate the Eighth Amendment's bar on cruel and unusual punishment, because the prisoners' appeal "failed to identify a known and available alternative method of execution that entails a lesser risk of pain."

In a 46-page dissent joined by Justice Ruth Bader Ginsburg, Justice Breyer questioned the constitutionality not only of the drug used, but of capital punishment itself.

Going beyond the scope of the question before the court was an unusual move for Justice Breyer, Shapiro said. But she thought his dissent reflected his frustration. Death penalty appeals are frequent, but the court hasn't been able to evaluate the constitutionality of capital punishment itself in decades.

"There are death penalty cases before the court all the time, and they are not always fully briefed," Shapiro said. "He sees that all the time. He's operating from a base of having a lot of information. It's not theoretical."