Insurance carriers may hope that COVID-19 coverage litigation is nearing its end with rulings in their favor by the Massachusetts and Iowa high courts, but positive outcomes for policyholders in Nevada, Pennsylvania and California state courts show some of these suits may still have legs.

Policyholder attorneys pointed to those better results, all in states that don't yet have a COVID-19 coverage suit in front of their highest court, saying that different state authorities may interpret the contract language in favor of businesses that say their policies should have covered their losses from pandemic-related shutdowns and other business interruptions. 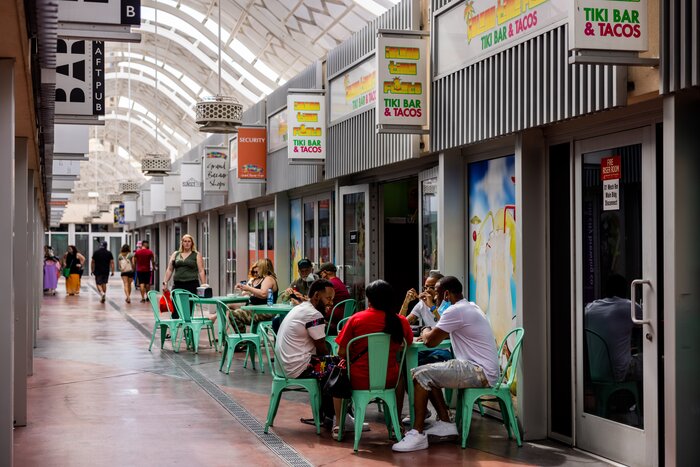 Las Vegas' Grand Bazaar mall is one of several businesses whose COVID-19 coverage suits have made some headway in state courts, with a trial set for June. Policyholder attorneys say some state authorities may interpret contract language in favor of businesses that claim their policies should have covered their losses from pandemic-related closures and other business interruptions. (Roger Kisby/Bloomberg via Getty Images)

Scott Greenspan, senior counsel at Pillsbury Winthrop Shaw Pittman LLP, touted recent policyholder victories in those state courts, as well as the Iowa Supreme Court's language in its COVID-19 coverage ruling as support that the presence of the virus on premises can cause physical loss or damage. In the Iowa decision, the court seemed to have carved out a situation in which policyholders may be able to prove their case, he said.

Attempts by insurance carriers to pronounce the COVID-19 business interruption litigation "as dead or over" with the two recent outcomes in state high courts "are wishful thinking on their part," he said.

Policyholders took a couple punches late last month in COVID-19 coverage litigation when the highest courts of Massachusetts and Iowa ruled in favor of insurance carriers.

On April 21, Massachusetts' top court said a trio of Boston-area restaurants couldn't recover their pandemic-related losses caused by government shutdown orders, becoming the first state high court to rule on that issue. The justices ruled that there wasn't any physical loss of or damage to property.

Scott DeVries of Hunton Andrews Kurth LLP, who represents policyholders, said that the Massachusetts high court justices made a core mistake treating COVID-19 as a unique risk of loss.

More than 50 years of case law exists on the availability of coverage for noxious substances that damage or otherwise interfere with the use and enjoyment of the property, he said. Evidence shows COVID-19 spreads on sites in the same way as smoke can drift or water can seep into property, he said.

The Massachusetts justices compounded their mistake by essentially saying a policyholder's efforts to reduce their amount of damage through takeout and delivery can negatively impact whether coverage exists, he said, adding policyholders would otherwise be blamed for not making attempts to remove the virus.

A day after the Massachusetts justices put out their decision, policyholders were dealt another blow.

The Iowa high court held on April 22 that a Des Moines golf club and a restaurant weren't covered, without any physical aspect, for losses caused by government-imposed restrictions. The policies contained virus exclusions so the policyholders didn't allege the virus was present on their premises.

The majority of the business interruption suits filed after the start of the COVID-19 pandemic include at least one of a raft of claims. Some of the claims attribute the losses to the presence of the virus on the premises, and businesses allege these losses are covered by their insurance policies because the virus physically altered surfaces and, in some cases, the air. Other cases — often filed by businesses whose insurance policies contained a virus exclusion — alleged the losses were caused by the government shutdown orders meant to curb the spread of the virus.

Gupta noted that, because the Iowa ruling focused just on the government orders claim, it "left open the door" for a potential better outcome in cases that allege the virus on the premises.

Federal appellate and district courts across the country have permanently tossed around 46% of the 1,373 COVID-19 coverage suits, according to Law360's COVID-19 Insurance Case Tracker. Also, the tracker shows another 17% of the pandemic insurance federal suits have been voluntarily dismissed.

While federal courts have largely ruled against policyholders, some attorneys believe those courts have gotten ahead of themselves, and that state high courts could turn the tide.

Because insurance is governed at the state level by each individual state regulator, it should be state supreme courts making the landmark decisions in these cases, instead of federal ones, policyholder attorneys said. The bigger coverage issues — pertaining to COVID-19 coverage suits that alleged the virus was present on the premises — are still open to decisions by various state supreme courts.

Some policyholder attorneys are pinning their hopes on the idea that the earliest filed suits over insurance coverage for pandemic losses were hastily pled in a rush to the courts. The early cases don't include well-developed allegations of just how COVID-19 caused physical damage or loss to businesses, and they didn't emphasize policy-specific language, attorneys said.

In one of those suits, the owner of Las Vegas' Grand Bazaar open-air mall has its COVID-19 coverage suit set to go to trial in June. A Nevada trial judge on April 25 denied part of Starr Surplus Lines Insurance Co.'s summary judgment bid, saying factual issues remain on whether the presence of the virus at the mall physically changed the property.

Judge Mark R. Denton of Clark County, Nevada, District Court ruled that the likely presence of the coronavirus at the mall owned by JGB Vegas Retail Lessee LLC was enough to allege direct physical loss of or damage to property. The judge hasn't yet considered a virus exclusion in the policy.

Representatives of the policyholder and insurance carrier didn't respond to requests for comment.

Ty Childress, partner in Jones Day's insurance recovery practice, commented that there has been a divergence in Nevada with the COVID-19 coverage fights, noting that state courts have allowed some cases to go to trial. But federal courts have concluded that, under Nevada law, coverage isn't warranted, without looking to the state court decisions that hinted it might be.

"To the extent that federal courts have been issuing rulings on state law, those rulings may not be the final word until the state supreme courts discuss the coverage issues," Childress said.

In another suit, a Pennsylvania trial judge in a one-page order refused to toss a Philadelphia-area realty trust's suit with a Zurich unit for decontamination costs it incurred after COVID-19 cases were confirmed at a dozen of its properties over the past year. Brandywine Realty Trust alleged $300,000 worth of losses.

Judge Ramy I. Djerassi of the Philadelphia County Court of Common Pleas allowed the case to continue on whether American Guarantee and Liability Insurance Co. must cover costs to decontaminate to meet government authority standards. The realty trust said it is covered for cleanup of communicable diseases.

In a footnote, the judge said he wanted to hear more from the realty trust on the mitigation efforts — suggested by government and public health science experts — taken to remove the virus from its premises.

Representatives of the policyholder and insurance carrier didn't respond to requests for comment.

And Century National Insurance Co. lost a summary judgment bid when a trial judge ruled April 18 that the owner of a Hermosa Beach, California, restaurant sufficiently alleged direct physical loss or damage to property and that it's up to a jury to decide whether the owner gets insurance coverage for it.

— an appellate court ruling that went in favor of the insurer.

In Inns by the Sea, the California appellate court held that a hotel operator couldn't recover for pandemic-related losses but raised the possibility in a hypothetical example that an invisible airborne agent — though not alleged by the hotel owner in that case — could cause direct physical damage to property.

In her decision, Judge Traber overruled Century's objections to testimony by a scientific expert that there was COVID-19 related physical damage to the restaurant before the stay-at-home orders were in effect. That evidence coupled with evidence that the restaurant's closure went beyond the government order requirements — by ending all takeout-service — was enough to defeat summary judgment, the judge said.

The judge has allowed a motion for reconsideration in light of additional appellate court rulings. Since the California Supreme Court declined to review Inns by the Sea, appellate decisions have been issued in favor of insurance companies, including against a Los Angeles restaurant and a Hollywood talent agency.

Karen Adelman of Berman Berman Berman Schneider & Lowary LLP, counsel for Century, told Law360 that Inns by the Sea supports the insurer's position and that she is optimistic that the trial court will reconsider the ruling in light of the two additional California appellate court outcomes published after the trial court's ruling that were decided in favor of the insurer.

Counsel for Boardwalk Ventures declined to comment. Representatives of the restaurant didn't respond to requests for comment.

DeVries of Hunton said that long-standing California precedent makes clear that a jury should decide causation and that other appellate districts will hopefully apply the correct analytical framework.

Looking Ahead To Remaining States

Gupta of Covington said that there are more promising cases still in their early stages that haven't gotten up to the state high court level yet. She said she's hopeful from some of the recent rulings that courts will start to rule that the disputes deserve to make it past the dismissal stage, where a majority of them have died out in federal courts.

"The recent rulings show that there are strong cases," she said. "It will be interesting to see if the appellate courts look at these cases in progress and take a different position from the rulings to date."

State high courts with pending cases include Vermont, Wisconsin, Washington and Ohio. And on April 25, a federal judge sent a luxury brands owner's question to the Maryland Court of Appeals, making it the first court to grant a policyholder's motion to certify a question in COVID-19 coverage litigation, according to policyholder attorneys.

COVID-19 coverage rulings need to be reached state by state, Kozdrey of Saxe said, by courts independently reviewing each insurance contract with specific language and corresponding facts giving rise to the coverage sought. "Not all first-party property policies are created equally," she said.

Policyholder attorneys noted countless state supreme courts are still on the table to decide whether virus particles on the premises cause physical loss or damage. Greenspan said policyholders expect major victories from state supreme courts that he says will follow the policies, pleading standards and six decades of pre-COVID-19 cases.

That existing precedent holds that toxic or noxious substances like COVID-19 can and do cause physical loss or damage to property without any structural alteration, according to policyholder attorneys. If the virus is alleged on the premises, then the attorneys said the policyholder has met its burden in its case.

The Zurich unit is represented by Louis A. Bove, Marc J. Syken and Jay M. Green of Bodell Bove LLC and Timothy A. Carroll and Eileen King Bower of Clyde & Co. US LLP.