The New York City Council speaker on Thursday called for deferrals of sales, commercial rent and business taxes and new taxes on payroll, high-end commercial property and the wealthy to combat the economic harm of the COVID-19 pandemic. 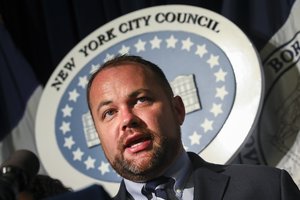 Council Speaker Corey Johnson, a Democrat, said his proposed $12 billion relief package should be paid for by the federal government or, if the federal government balks, by city bonding. He said his proposal would help industries that have been hit hard by the impacts of the outbreak, such as the hospitality industry, gyms, performance venues, retail shops and salons.

“This is a crisis unlike any we’ve ever seen. However, the tools that have helped us in the past can be utilized again,” Johnson said.

Johnson called for immediately deferring sales and use taxes, the city’s commercial rent tax and business taxes for small businesses for March. The deferrals would apply to small businesses affected by the forced store closures or those whose business has slowed because of restrictions applied by the government to try to stop the spread of the novel coronavirus, which causes the COVID-19 disease.

Specific details of some of Johnson's proposals, which as of Thursday had not been formally introduced, weren't immediately available.

The proposals would have the state refund or not collect all sales and use taxes in the previous quarter paid by affected small businesses in affected industries, though the taxes would eventually have to be paid back.

In addition, Johnson called for new taxes if the city is forced to bond, taxes that he said could include a temporary payroll tax, a 10% surcharge on high-end commercial property or a 0.75% tax increase on personal income for those making more than $500,000 annually. Those measures would need state legislative approval.

“To issue these bonds, our city is going to need new revenue streams," Johnson said. "We should ask the wealthiest corporations and people, those who are most able to weather this storm, to chip in a bit more."

Johnson’s tax proposals were part of a larger package meant to help businesses and individuals amid the COVID-19 pandemic, including a proposal for a temporary universal basic income that would give $550 for every adult New York City resident and $275 for each child.

Johnson’s proposals came on the same day New York City Comptroller Scott Stringer published an open letter calling for the state to consider several similar COVID-19 relief measures. Those proposals included a limited sales tax holiday for restaurants, hotels and street-level retail stores and waiving of commercial rent tax payments for two months for ground-floor retail. The mayor and City Council have the authority to waive the commercial rent tax without prior approval from Albany, while the sales and use tax holiday would need Albany's approval.

Asked about Johnson's plan during a press conference Thursday, Mayor Bill de Blasio also said there was a "tremendous" need for relief for small businesses and working people in the city which needs to come from the federal government. De Blasio's Department of Finance released guidance Thursday saying it would allow for waivers of penalties between March 16 and April 25 for city business and excise taxes, per request, for those affected by the virus.

"Right now we have to be very mindful that our city government is paying for a lot of extraordinary expenses," de Blasio said. "And while dealing with real revenue challenges, we're going to keep serving New Yorkers no matter what. But those really big bailouts have to come from the federal government."

Stringer said his recommendations could cost the city and state millions of dollars in lost revenue on top of projected lost sales, income and other tax revenues. That would come at a time when Stringer’s office has estimated New York City could lose at least $3.2 billion in tax revenue over the next six months because of the COVID-19 outbreak and resulting public health measures.

Nonetheless, Stringer said in his letter the relief was necessary in light of the economic damage that the virus and the response to it have already caused.

"We have no choice,” Stringer wrote. “City and state governments are the front line of the response; we see up close what our residents and businesses need, and are best positioned to respond with meaningful help immediately. But we also can’t do this alone."

E.J. McMahon, research director for the fiscally conservative Empire Center for Public Policy, told Law360 that deferring business and sales tax payments due in March is a good idea but the only feasible tax proposals he supported. Nonetheless, he questioned whether the city could absorb the cash flow hit on such a delay for very long. He also panned Johnson’s other tax proposals.

“The rest of the ideas are a combination of wild, unaffordable overreach, such as the [universal basic income], which suggests Corey Johnson thinks he is speaker of the U.S. House, and the vague tax increase options, all aimed at the higher-income segment of the economy, which is getting absolutely clobbered in the markets,” McMahon said.

City Council spokeswoman Jennifer Fermino responded to McMahon by saying hundreds of thousands of New Yorkers were losing, or in danger of losing, their livelihoods.

“New Yorkers have always looked out for one another in times of crisis, particularly those who need the most help. We must all do our part in this unprecedented time,” Fermino said.

Council Member Daniel Dromm, chair of the council’s Finance Committee, said he was on board with Johnson’s proposals, noting that federal money may be slow to come and may not be enough.

“We have a plan to bring relief to the hundreds of thousands of NYC workers who have been hit hard by COVID-19," Dromm said. "By deferring fees without penalty, refunding business taxes, expanding the safety net and putting money into New Yorkers' pockets, this plan will ensure that many who need help will receive it."

Congressional leadership offices didn't immediately respond to requests for comment. On Thursday, though U.S. Senate Majority Leader Mitch McConnell, R-Ky., announced legislation that would provide cash payments to families and grant tax relief to individuals and businesses in Congress' third effort to stave off the economic effects of the pandemic.

Some Albany leaders have hinted they don’t have much of an appetite for new or increased taxes at the moment. The state is facing revenue shortfalls of $4 billion to $8 billion, the state comptroller has estimated.

“I don’t think now is the time to tell people we’re going to raise their taxes,” Cuomo said.

And Senate Majority Leader Andrea Stewart-Cousins, D-Yonkers, told reporters Wednesday that while she was willing to consider new revenue raisers, it wasn’t her first priority. The federal government, she said, needs to step up and help the state as it faced billions of dollars in deficits.

“I don't know how to tax our way, frankly, out of this, no matter what,” Stewart-Cousins said.

Some of the proposals drew industry approval. Sara Klein, a spokeswoman for the Real Estate Board of New York, the main lobbying arm for real estate interests in New York, told Law360 said the board believes New York City and the state should take a number of steps, including suspending the commercial rent tax for ground-floor tenants, eliminating penalties for late property tax payments and reducing sales and use taxes, deferring sales tax payments and suspending late sales and use tax payment penalties.

“We are pushing for a significant expansion of federal, state and local programs to support our economy and help restaurants, retailers, and small businesses,” Klein said.

Speaking to reporters on Thursday morning, state Budget Director Robert Mujica said the administration was considering delaying sales and use tax deadlines, though he emphasized that businesses collect and remit those taxes on behalf of the state. Any deadline change would be because businesses might not be able to file on time, he said.

Update: This story has been updated to include comments from Fermino.